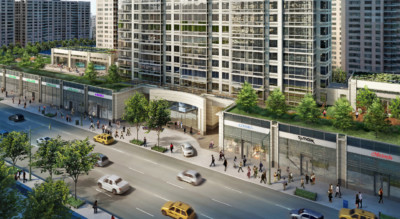 Winick Realty Group announced that three anchor tenants have opted to extend their leases at Columbus Square, in transactions totaling over 100,000 s/f.

TJ Maxx, currently located at 808 Columbus Avenue, extended their lease for 40,550 s/f at the property, in addition to extending the lease for sister company Home Goods at 795 Columbus Avenue, where the brand has a 27,019 s/f store.

“Columbus Square has brought new excitement to this Upper West Side neighborhood and created a destination for both local residents and shoppers from all over the city, allowing the retailers there to truly thrive,” said Winick Realty Group CEO Jeff Winick, who represented ownership in the lease extensions.

“We are pleased with the success that TJ Maxx, Home Goods and Michael’s Arts & Crafts have had at the property and we look forward to these tenants remaining at Columbus Square for years to come.”

Along with these renewals, Winick Realty Group announced the completion of a 10,976 s/f lease transaction at 775 Columbus Avenue that brings Montessori educational organization Higher Ground Education to Columbus Square. The company plans to open an early childhood Mandarin immersion school in the space, which formerly housed the Mandell School. Jordan Gosin of Newmark Knight Frank and Nick Carey of JLL represented the tenant, while ownership was represented by Winick and his associate Ross Burack.

Winick Realty Group is the exclusive broker for Columbus Square, the  mixed-use development located on Columbus and Amsterdam Avenues between West 97th and West 100th Streets on the Upper West Side.