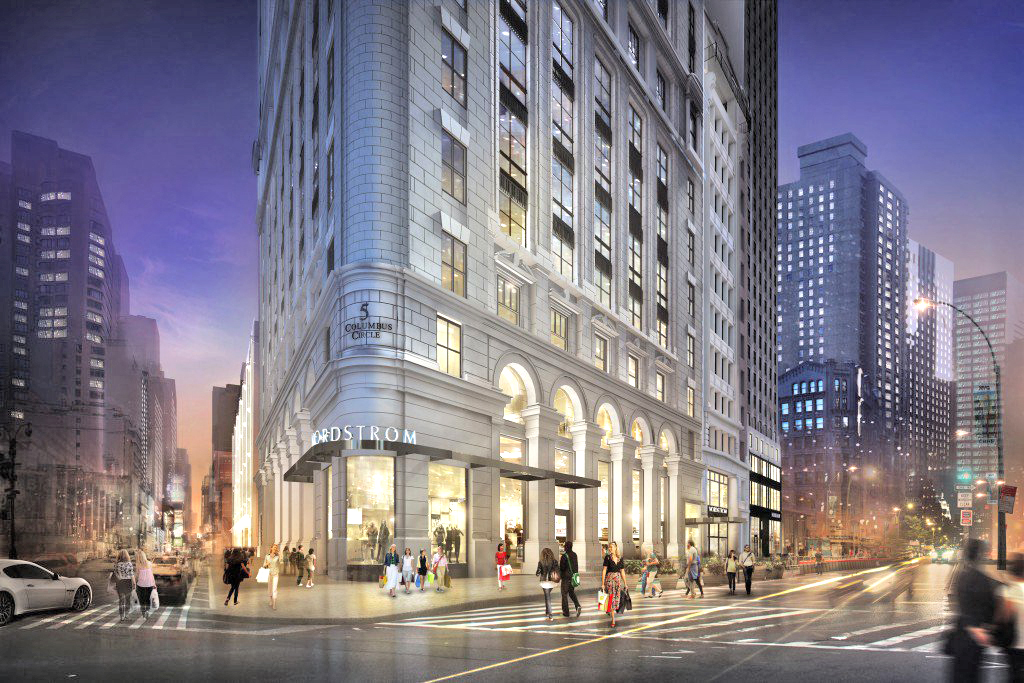 Why I love my own private Nordstrom

Few New Yorkers could have been more eager than me for the opening of Nordstrom’s new flagship women’s store near Columbus Circle.

With seven floors of brand-name fashions, the 320,000 s/f emporium is reportedly the biggest stand-alone retail space opened in Manhattan in nearly 70 years, at a cost of $500 million.

But my excitement had little to do with the merchandise or glitz. Rather, my office at 1776 Broadway is surrounded on all sides by the designer superstore, and therein lies a New York tale of patience tested.

For the past seven years, my neighbors and I endured endless disruptions from working in the midst of a massive construction site.

It started with Obama-era dynamite blasts and bulldozers excavating the demolished 225 West 57th Street next door — we felt the seismic thumps for months. That was followed by pounding fabrication noise along with hazardous debris and dust that floated through our windows.

So, I’m ecstatic simply that the store’s protracted build-out is complete.

Nordstrom’s irregular sales space now occupies the first four floors of our 1927 building with the Liberty Bell crest and Pledge of Allegiance plaque; lest I forget how to find my way, the store offers four separate entrances to the left, right and around the corner from us, including one leading to Nordstrom’s men’s shop across the street.

Part of me almost hoped no one would show up to shop – revenge for the inconvenience and extra carpet-cleanings, and for agreeing to renew my lease at higher rent last year on the promise that the development was nearly done.

But how could you wish ill on a merchant willing to make such a huge bet on a New York showcase, at a time when traditional department stores have become archaic and shoppers increasingly looking and buying online, mostly for discount brands?

As soon as I set foot into the actual store, however, any lingering huffiness evaporated. I was overtaken by the wonder of it all, as if our new neighbor were a World’s Fair pavilion rather than a vertical mall.

Others have already heaped praise on the dramatic interior created by Nordstrom’s design chief Dawn Clark and architect James Carpenter.

What has struck me over several visits wandering from floor-to-high-ceilinged-floor is how far fashion retailing has evolved in recent decades. We’ve gone from the austere, hushed approach of Saks and the crammed, overstocked subway-car style of Bloomingdale’s to a new form of haute bazar that Nordstrom represents.

New Yorkers are accustomed to time-lapsed makeovers altering the city’s skyline and commercial face. Amnesia competes with nostalgia in the constantly new and improved New York. Having lived through extensive reconstructive surgery all around me, I need prompting to remember the friendly Pax outlet downstairs is now a glam Nike mini shop within Nordstrom. Who’s to say in a few years it won’t be an Amazon Go store?

For now, it’s nice that our corner of Billionaire’s Row is being given back to the little people on the ground, with a bit of light and room to walk.

Some of the sidewalk sheds have come down . The construction guys have stopped pushing dumpsters past you like shopping carts at D’Agostino’s. And I can step into the street without ducking my head under a pole. We even got a slick new lobby entrance at 1776, with brass doors, elevator security cards and polished Liberty Bell tablet. I’m bracing for when my lease is up again – Nordstrom, you owe me.

Peloton parks up in New Jersey

All I want for Christmas is a rent regulated apartment