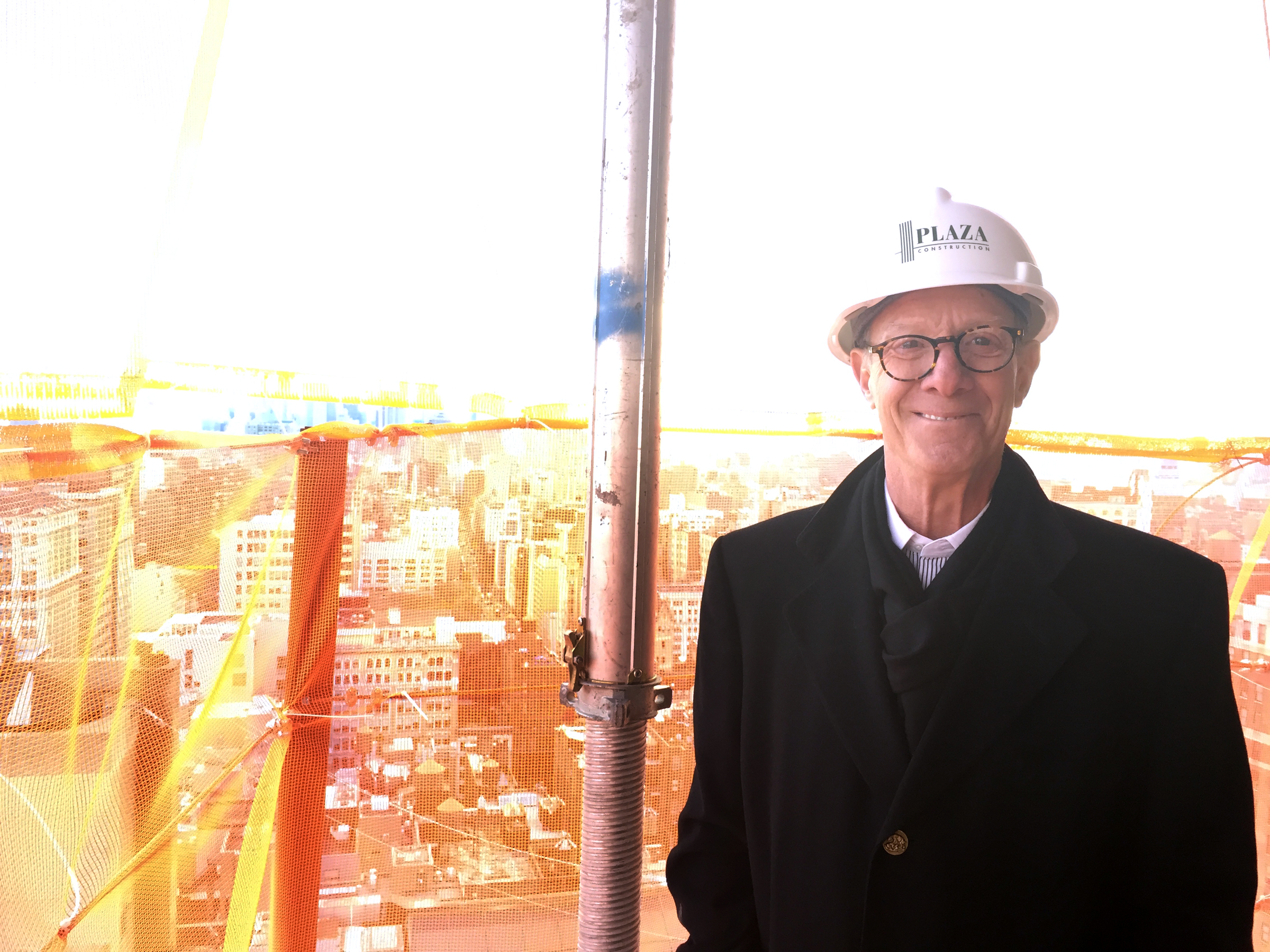 We’re 29 stories above Flatiron on a windy afternoon, on a bare bones floor that is strewn with construction supplies and is absent windows, with just orange netting where floor-to-ceiling glass will be installed. And Bruce Eichner is all smiles.

The veteran developer has an abundance of colorful stories to tell – and an unfailingly upbeat attitude. It’s been the year of the comeback so far for Eichner. His firm, the Continuum Company, is building the ambitious Flatiron luxury condo tower, 45 East 22nd Street, which is now 50 percent sold, and it’s not even halfway built yet.

Before ascending to the highest built floor, Eichner shows off the building’s expansive sales gallery at 315 Park Avenue South, complete with a model apartment meticulously designed and furnished by Martin Brudnizki Design Studio – it even includes pieces of his own furniture, including an art deco piece from the 1930’s.

“This is more non-contemporary, non-designer, more intended to say someone really lives here,” says Eichner of the furnishings and interiors of the apartments. “Everyone is kind of morphing toward very contemporary, white kitchens, hard edges; I didn’t want to do that because I think it’s a moment in time.”

Instead, Eichner and the design team focused on finishes that wouldn’t become dated, creating more rounded edges and moldings, custom hardware in the kitchen and even the front door handle.

“We try to have every room have a piece in it that’s memorable,” says Eichner.

And memorable is just how he would like his 65-story luxury residential building to be. The tower will have what Eichner describes as an “unusual” amount of amenities for an 83-unit building, including a half basketball court, a golf simulator, a gym designed by the guy who heads up15 Central Park West’s fitness center, a library and lounge room that is a nod to the Nomad Hotel, and an “upper club” on the 54th floor, a 1,600 s/f event space with a catering kitchen that can be reserved free of charge by residents.

Going all out on amenities wasn’t decided on a whim. It’s all part of Eichner’s strategy for selling the building, which he breaks down into four steps.

“The market is clearly softening,” he says. “What’s going to happen as a result of that, is that there are going to be winners and not winners. The buyers don’t disappear, what happens is, they have choices, and when they have choices and don’t have a sense of urgency, they will only go to something that they perceive has value.”

And so far, it’s working – the building won’t have occupancy till the fourth quarter of 2016, and won’t be fully finished till June of 2017, but the units are already halfway sold, after launching sales last February.

“I’m probably in pretty good shape,” he says. “That we’ve gotten this far is a function of the four things I mentioned earlier.”

Though he is ecstatic at how well sales have gone, he certainly didn’t expect it to go this well, admitting that he has barely done any advertising for the building.

However, a social media campaign is set to launch soon, and Eichner is focusing more on digital marketing rather than print ads for the building.

The road to building 45 E. 22nd started after Flatiron’s original uber-tower, One Madison, went into bankruptcy in 2010.

“I tried to take that building over and part of the due diligence when looking at it, I knew that the former developer had an idea to build a 16-story building in back of it,” recalls Eichner.

He knew that in order to build the smaller building, there were air rights available, so he set about purchasing the air rights to several buildings on 23rd Street, one by one.

“It took me ten months, I went around like a maniac and didn’t sleep,” he says.

The last property owner proved the most difficult – but after two hours of face-to-face discussion, obtaining a ruling from the DOB and hiring an expediter to make sure selling his air rights wouldn’t affect the owner’s rooftop garden, Eichner finalized the deal.

“Part of what makes these real estate things, lost in time, as opposed to computers and technology, is this old-fashioned kind of deal making 101 – it hasn’t changed in 50 to 60 years,” says Eichner. “Can you talk to someone? Can you figure it out?”

Watching the tower – which will rise to 777 feet once completed and stand as the tallest tower in Flatiron – rise from his office nearby on 21st Street after so much work, has been gratifying for Eichner.

He describes the unit layout – just two per floor – from the 29th floor of the building, which offers expansive views of the city with virtually no impedances due to the fact that the 45 E. 22nd Street towers above the lower-rise buildings of the neighborhood.

The units will range in size from one to four bedrooms, with ceiling heights between 10 to 10 and-a-half feet, with floor-to-ceilings windows.

Corcoran Sunshine Marketing Group is heading up sales on the apartments, which range in size from 1,146 s/f for a one bedroom, and start at $3.2 million, to 4,655 s/f for four bedroom units, which go up to $20.75 million.

With construction humming along and sales showing so much promise, Eichner’s first project in NYC in 15 years is on the right track, and he credits his DNA as part of the promising outcome.

“I have a lot of real estate stories over 35 years,” he says. “I seem to have a penchant for characters. Usually if you can’t deal with these people, that’s what separates you – being able to deal with lunatics. I think that side of the business is in your blood. I don’t think that’s a teachable skill.”