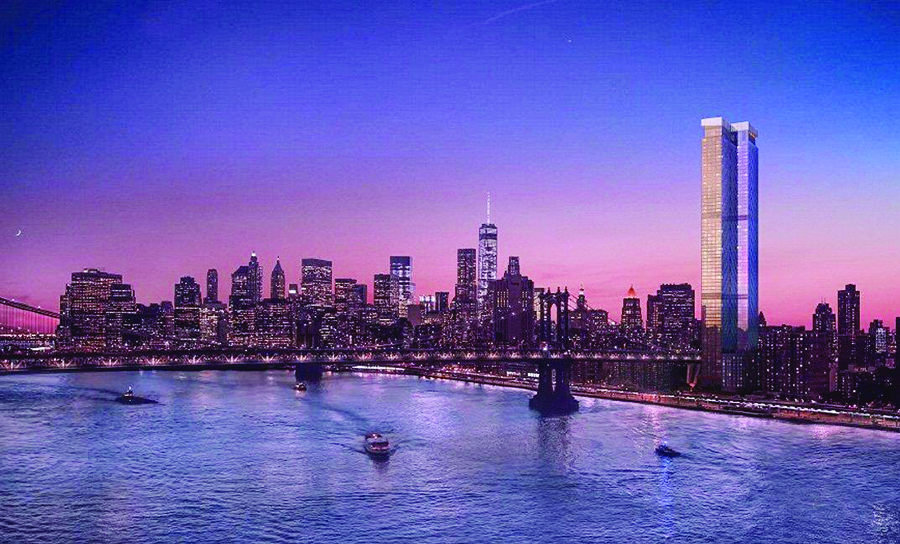 The days of 421a are gone — but there are still new developments able to offer the lucrative tax in the city.

The 421a program, first created in 1971 to spur residential development in the city, offered qualifying development tax abatements for at least 10 years.

Although it expired in 2016, several developers were able to secure 421a exemptions for their projects before the program ended and the state began working on a new iteration. Extell Development worked on two 421a projects in Manhattan, The Kent at 200 East 95th Street and One Manhattan Square, steps away from the Manhattan Bridge.

One Manhattan Square is expected to complete by early next year and offers 815 units with a 20-year tax abatement at prices starting at $1.2 million.

Sales launched in fall 2016 for the 83-unit Kent building that offers three- to five-bedroom apartments starting at $3.7 million with a 20-year abatement.

“Buyers are coming in and they understand the purchasing price, but they spend more time studying what their monthly tax costs are,” said Raizy Haas, Extell’s senior vice president of development.

“They know how much money they have now to spend, but no one knows what the future will hold, so it’s very important to them that we make use of the [421a] program.”

According to Michael Monterosa, the sales director for The Lindley, the building is already 70 percent sold and has attracted a lot of attention due to its tax abatements.

“It’s a significant part of people’s decision because it’s such a large saving over the course of the 10-year abatement,” Monterosa said.

He added that it’s easier to find tax abatements in Brooklyn and the Lower East Side, but having a Midtown development that offers 421a is rare.

The developers, Adams America Real Estate and Naveh Shuster Group, wanted to separate themselves from the Brooklyn luxury condo crowd by securing the 421a tax exemptions, according to Tamir Shemesh, the building’s head of sales.

“It’s very rare, especially for new development that’s coming on the market now, or even in the last year,” Shemesh said of recent 421a buildings. “And it’s a big priority, because you always look at how much it’s going to cost you a month.”

For some developers, the new Affordable New York program is not a solid plan going forward. And amidst the recent changes from the federal tax law, potential homebuyers are beginning to question if purchasing property is the right move.

Jeff Levine, founder and chairman of Douglaston Development, explained the new tax abatement program increases the burden for developers to reach affordability limits and fair wages for their workers. Instead, Levine believes the solution is to correct the root issue of the city’s tax valuation system instead of finding temporary fixes like 421a.

Levine also points to several related issues, such as the current state of the development market, the elimination of state and local tax exemptions due to federal law changes, and the costs of purchasing land in the city.

“All of this has made development in New York challenging,” Levine said. “But the real underlying problem is the disparate tax structure we have in real estate in New York City.”

Levine called on city and state officials to correct the taxation system so it doesn’t punish new developments. And the city has at least begun the steps to review the convoluted system. In May, Mayor Bill de Blasio and Council Speaker Corey Johnson announced an advisory commission that aims to make the city’s tax system to be more fair, simple and transparent.

For now, Levine is not sold on the future of residential developments in a world of Affordable New York.
“You have to watch what happens going forward in the development world,” Levine said. “I suspect there won’t be a lot of large multi-family residential being done.”

While the Affordable New York program is aimed at creating more affordable housing, developers may find it difficult to meet the thresholds and there are concerns they could turn away from building more projects.
With a dwindling stock of new developments benefiting from the old 421a and developers wary of the new program, the pressure is on for affordable housing’s future.

“I think it’s a shame we had a change in policy and I think it discourages developers from building more affordable housing,” Haas said.

Reportedly, the city’s Department of Housing Preservation and Development (HPD) has only issued a handful of Affordable New York tax breaks to date.

Citywide, there are 72,390 units with the old 421a tax break in place. The Department of Finance (DOF) created a tool that co-op and condo owners can use to track their property’s 421-a tax abatement status. You can find it at https://a836-propertyportal.nyc.gov/default.aspx