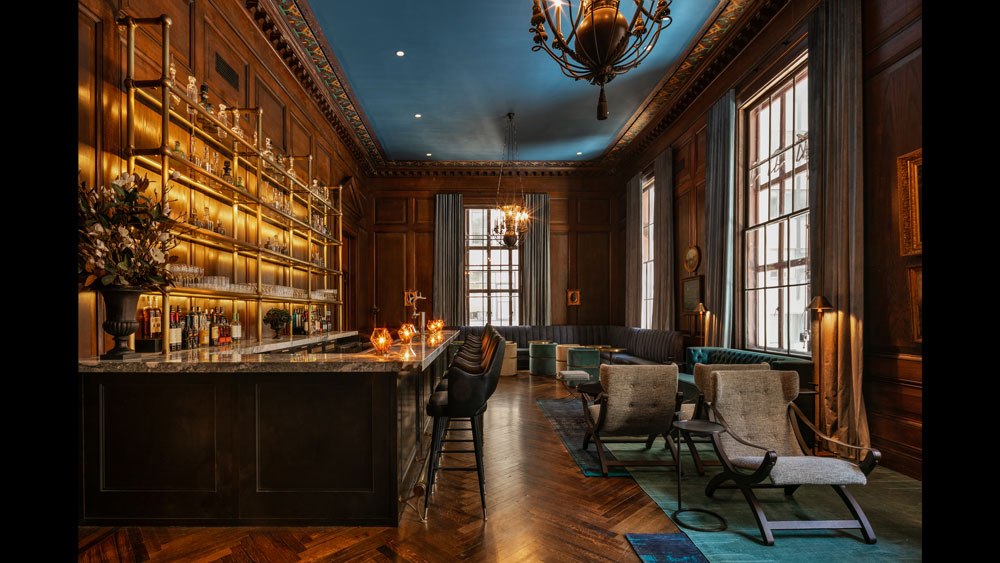 For most New Yorkers, hunting down the perfect cocktail bar might involve lots of querying — search engines, friends, co-workers, the dreaded glut of year-end “best” lists.

Then again, most people don’t live at the newly-renovated luxury tower at 63 Wall Street.

“The speakeasy is probably our most popular amenity,” said Kateryna Pachashynska, leasing agent for the building. “That one snow storm we had, it was packed. A lot of residents pop in after work with their colleagues to grab a drink in here.”

Though the building — jointly owned by The Brooksville Company and Rockpoint Group and managed by Pinnacle City Living — has undergone a massive face lift since its days as the headquarters of Brown Brothers Harriman, one of the oldest private banks in the US, its history remains arguably most prominent in the tower’s dimly lit speakeasy.

Renovations to the bar’s decor, designed to mimic that of a classic 1920’s era bar, retained the room’s original chandeliers and accentuated the rich mahogany walls in addition to adding new banquet and bar seating as well as a formidable cocktail and small plates menu that includes everything from curated cheese and charcuterie to a proper Old Fashioned.

Likely one of the biggest factors behind the discreet bar’s popularity is the fact that it is, by design, mostly unpopulated, at least by non-denizens of 63 Wall Street.

The bar, aptly dubbed The Transcript, is only available to residents of the building — and up to three guests at a time — making it almost entirely unique in New York.

Though The Transcript may be the centerpiece of 63 Wall’s amenity package, it’s not all about the libations. For renters in search of a sober way to unwind, the luxury tower also offers up a host of perks for the athletic-minded. Chief among them are a two-floor fitness center equipped with an array of new equipment including Peloton bikes and a golf-simulator which like the speakeasy can be rented out for based on a sliding scale of time frame and number of guests.

The building also features a sky lounge, game room, children’s play room, and for some residents the oft coveted in-unit washer and dryer.

According to Pachashynska, when it comes to what separates 63 Wall from other luxury residences of its kin, this suite of amenities take center stage.

“In New York City living you have roommates, you have kind of different situations, you’re living in a small studio where you just sort of need to get out of your space,” said Pachashynska.

That push towards convenience is key to 63 Wall’s gameplan. Like many luxury towers, 63 Wall has situated itself to appeal to millenials and new workforce with changing workplace dynamics as well as more mature renters whose children might take advantage of the playroom.

According to David Sorise, Senior Vice President of Pinnacle City Living, though history is baked into much of the design and amenities, 63 Wall has worked to cater to a full-service and easy type of living experience.

“Everyone wants things more easily and more quickly these days,” said Sorise. “They want the app to access the thing, they want to be able to call the concierge and services as quick as possible.”

While maybe not the sexiest amenity, Pachashynska said that the building’s conference room is among the most popular. Likewise, a fully renovated great room decked out in green velvet chairs and towering windows, a sky lounge with a kitchen, outdoor deck, and pool table, and a library where residents can go to concentrate allow a more home-centric experience for those in the building.

All of these amenities, said Sorise, work to create a both a better experience for the renters, but also a more intimate link between building and residents.

“[The amenities] create a sense of community that’s very important for our residents,” he said. “We want people to feel a connection to living in the building.”

Many apartment types also come in several configurations all with a clean modern design done by The Design High. In all, the building contains 807 apartments throughout 37 stories and is at about 95 percent occupancy, according to a representative.

Aptly, Sorise said, rooms are designed to portray a sense of both “old and new.”

“We have a fully renovated property that looks great, but it has a call back to the old,” he said. “You walk in and it feels new, but the history is still there.”