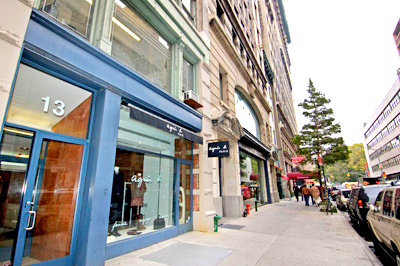 Adelaide Polsinelli has closed on the first retail condo trade in Union Square in the past six months.

The Compass vice chairman announced that she worked with Karen Kemp and Joe Brazil of MHP, a Banyan Street Company, to sell the store at 13 East 16th Street (pictured top) for $1,661 psf and at a 4.5 per cap rate.

The buyer runs a computer technology business and plans to collect rent from longtime tenant, fashion boutique Agnes b, for the next two years of their lease and then occupy the space himself.

“The buyer recognized that this point in time presented a once-in-a-cycle opportunity to buy a retail store for his business, in a better location than where he was renting,” said Polsinelli.

“He is willing to wait until the existing lease expires and will use that time to design his layout while collecting income.”

Known for its concentration of boutique shopping and dining venues, Union Square has been among the biggest retail victims of the pandemic with 34 chain stores alone closing, according to the Center for an Urban Future’s annual State of the Chains report, and a slew of restaurants shutting down, from high profile eateries like Blue Water Grill, to small independents such as Mi Garba and the Vietnamese Saigon Market.

According to Polsinelli, many of those vacant spaces are starting to be scooped up by end-users. She said her last four deals have been with end-users, including 207 East 32nd Street, and is currently in contract on a midtown retail property to an international retail tenant and a Soho retail condo. She has also sold two Queens buildings to end users and a development site in Brooklyn to a retailer.

“With the retail and sales landscape evolving, I am now seeing owner users stepping up as buyers to purchase real estate for their own business and secure a retail presence,” she noted.

And it’s not just retail condos. According to the January Office Condo reported from Rudder Property Group, the pandemic has brought a “definitive shift” in the market.

“The pandemic has brought office condominium pricing to its lowest levels in over five years and companies are beginning to take advantage of these numbers and invest in the long-term benefits of office ownership. This offers a bright moment at the end of a difficult year,” said Michael Rudder, principal of Rudder Property Group.

At 13 East 16th Street, the private seller was among the many New Yorkers who decided to leave the city when coronavirus struck and agreed to drop the price for a quick sale.

“Unfortunately, there were very few buyers willing to buy anything involving retail,” said Polsinelli, who represented the purchaser, a local business owner who had hired Polsinelli to locate a retail space where he could eventually relocate his computer technology business.

While the tenant profile may be changing, however, Kemp is confident the neighborhood will return to his pre-COVID vitality. She said, “With this steady confidence and investment of capital, Union Square and The Flatiron District, will continue to be a solid retail destination.”

Polsinelli added, “Having sold retail properties in this area over the past decade, I can say without question that this area will be a strong long term investment. This is a testament to the street’s intrinsic value through all phases of the market cycle.”

Located midblock, on 16th Street, directly across the street from Union Square Park, the retail unit has been by occupied by Agnes b for the past 30 years. The boutique has three stores in the U.S., all of which are located in New York City – 1063 Madison Avenue, 13 East 16th Street and at 50 Howard Street in SoHo.

Before the pandemic, the company had announced it hoped to open another Manhattan store and expand into Westchester. The company did not respond to an emailed request for comment on the sale of the East 16th Street location.