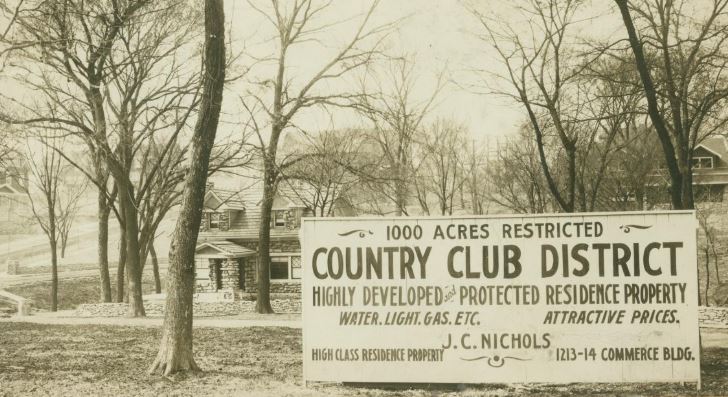 The Urban Land Institute is dumping the name of a pioneering real estate developer from its honor list because of his segregationist policies.

The $100,000 J.C. Nichols Prize for innovative builders will be re-named the ULI Prize for Visionaries in Urban Development.

“Nichols greatly influenced the design and management of suburban America and was at the forefront of professionalizing the real estate industry in the U.S. However, his use of restrictive covenants perpetuated racial segregation and discrimination, the negative impacts of which still affect some communities today,” said the ULI in a statement.

“This element of the Nichols’ legacy is clearly inconsistent with our mission and values, and when viewed through a longer-term lens that better recognizes the lasting impact of these practices, mandates that the prize be renamed.”

Nichols is credited with creating the modern subdivision in 1920s Kansas, but he also created covenants that prohibited Blacks and Jews from owning or occupying the homes. It was a model that would be copied by thousands of developers for years and was adopted by the federal government to segregate housing developments across the US until as late as 2005.

Ed Walter, global chief executive of the Urban Land Institute, said, “We believe removing J.C. Nichols’ name from ULI’s most important individual honor is a critical step in our commitment to addressing the racial injustices of the past, and to improving the diversity and inclusivity of our organization and industry going forward.”

Originally established in 2000 by a gift from the Nichols family to the ULI Foundation, the prize has recognized an individual who has made a distinguished contribution to community building globally, who has established visionary standards of excellence in the land use and development field, and whose commitment to creating the highest quality built environment has led to the betterment of our society.

J.C. Nichols is widely regarded as one of America’s most innovative and successful real estate developers of the first half of the twentieth century, developing the Country Club Plaza in Kansas City, a forerunner to the modern outdoor shopping center.

Despite a Supreme Court striking down racially restrictive housing covenants in 1948, the effects of such exclusionary practices in cities like Washington, D.C., Baltimore, MD, and Kansas City, MO, among many others, lasted for generations and remain visible today.

These practices blocked families from many neighborhoods and cut them off from a significant and otherwise common pathway to build wealth through home ownership. And members of our communities continue to struggle with the health and economic implications of living on less desirable land, often adjacent to polluting industry or farther from job centers.

“Over the last few years, the prize Jury and Management Committee have shifted the focus of the prize to align with ULI’s mission,” said Wayne Nichols, grandson of J.C. Nichols. “With this shift, the Jury has recently recognized visionaries who have sought to improve the built environment for people across a broad spectrum of society.”

Recent winners of the prize include 2017 laureate Robin Chase, cofounder and chief executive officer of Zipcar. Artist and urban planner Theaster Gates was the first Black American to win the Nichols Prize in 2018.

Going forward, the Nichols Family will continue to support the prize, allowing ULI to continue to recognize leaders who enhance the built environment, in ways that benefit everyone in our diverse community.