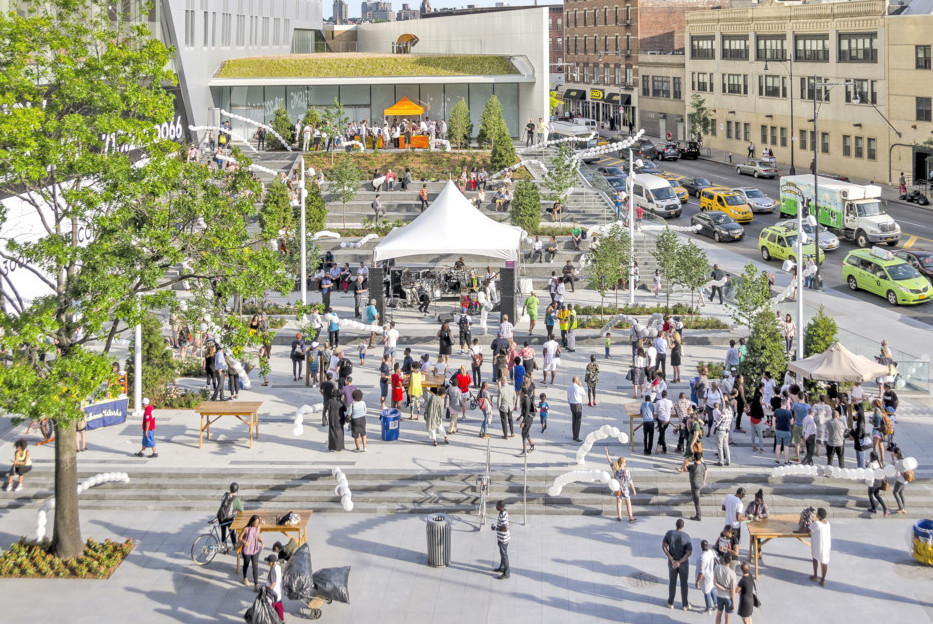 The 15,000 s/f plaza activates one of Brooklyn’s most recognized yet historically under-utilized intersections: the corner of Flatbush and Lafayette Avenues.

Designed by Enrique Norten of Ten Arquitectos and Grain Collective, the new plaza will create a public place for residents, theater-goers, shoppers, and visitors to gather, relax, eat, and more.

“Two Trees has been working in partnership with the City, cultural groups, and the Downtown Brooklyn Partnership for a decade to create a great new public space for the community to enjoy. The new plaza is at the crossroads of so many neighborhoods, and all of the partners are committed to ensuring it is a vibrant new open space with programming and performances, becoming a true destination at the heart of the Brooklyn Cultural District,” said Two Trees Management Company principal Jed Walentas.

“This public plaza introduces a spectacular new open space to the heart of the Brooklyn Cultural District,” said Regina Myer, President of the Downtown Brooklyn Partnership.  “We applaud Two Trees Management and the City on so creatively integrating open space into the urban landscape. The 300 Ashland plaza marks an important step forward in Downtown’s wider renaissance.”

The central public plaza will serve the Brooklyn Cultural District and surrounding Brooklyn neighborhoods of Downtown Brooklyn, Fort Greene, Park Slope, Prospect Heights, and Boerum Hill. The street-level civic space is near Atlantic Terminal, Barclays Center and Fort Greene Park. The plaza will be maintained and programmed by the Downtown Brooklyn Partnership and activated with performances, art, and events.

The $6 million public plaza was financed and built by Two Trees Management and ownership will soon be transferred to the City of New York. It sits at the base of 300 Ashland, the 32-story building that includes 379 residences, 20 percent of which are affordable to low-income New Yorkers. In addition, the 365 by Whole Foods grocery store will anchor 300 Ashland, and is slated to open by the end of the year.

At 300 Ashland Two Trees also constructed a custom core and shell for a 50,000 s/f cultural hub that, together with the public plaza, will soon be transferred to the City.

The City plans to fit out the cultural space for an expansion of BAM Cinemas, a branch of the Brooklyn Public Library, the Museum of Contemporary African Diasporan Arts (MoCADA) and 651 ARTs.