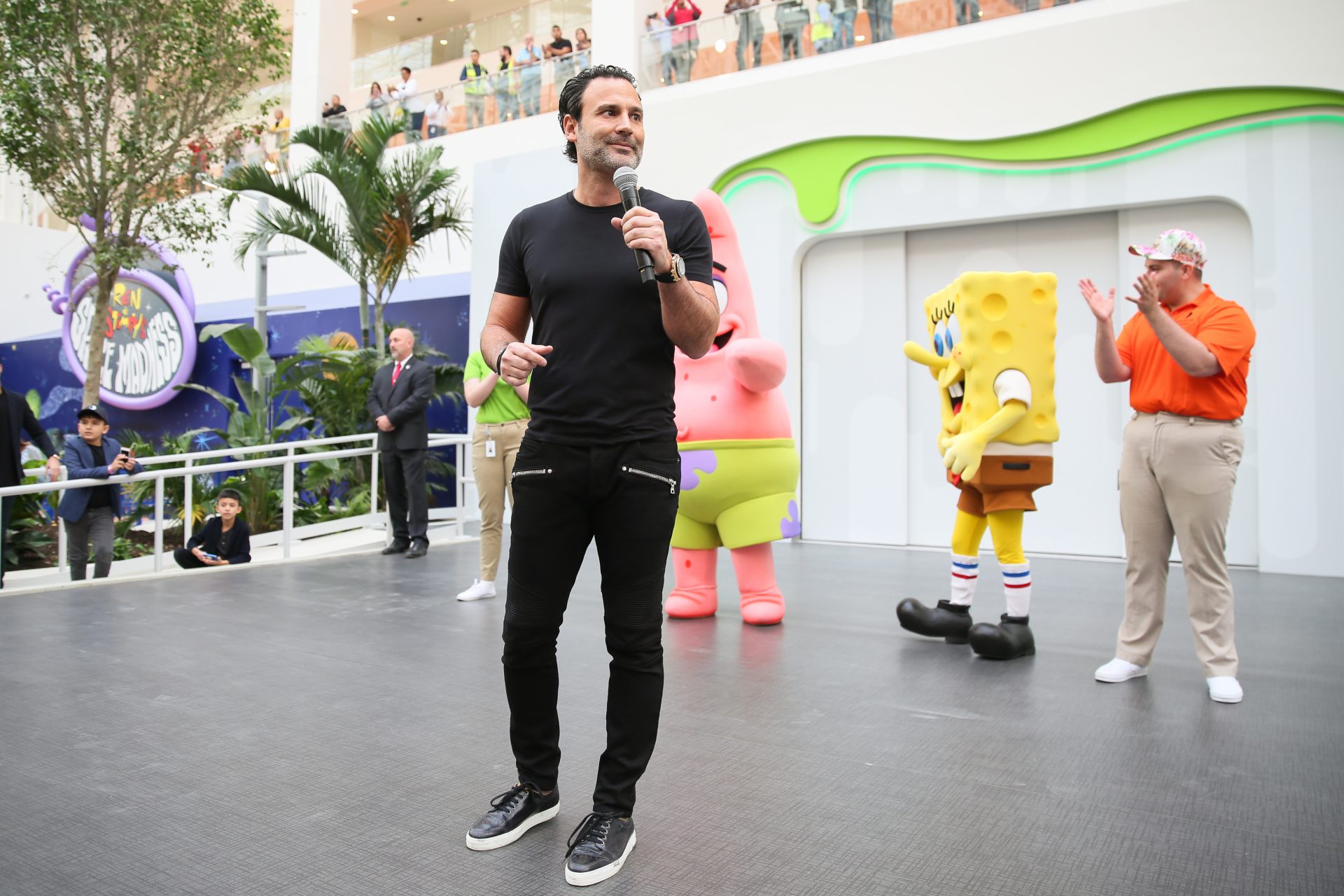 It wasnʼt the opening theyʼd hoped for, but mall developer Triple Five opened the doors to a corner of their American Dream last week, 15 years after the project was first conceived.

Flanked by Nickelodeon characters Spongebob Squarepants and Patrick Star, Don Ghermezian, CEO of American Dream and president of Triple Five (pictured top) led a parade around a slither of what will ultimately be eight-plus acres of entertainment and retail space.

This reporter visited on Sunday when crowds were out to get their first glimpse inside what was once called “the ugliest mall in America.”

While signage from the main Route 3 from New York City was limited to just two randomly placed placards, once inside the sprawling space adjacent to the Meadowlands race track, workers waved traffic to the single entry point where a Pumpkin Festival was in full swing and families happily picked their own, painted them and helped themselves to treats placed in large buckets around the gleaming space.

Both were busy on Sunday and visitors took advantage of free skate offerings and discounted theme park tickets.

Murphy, whose office had only granted a temporary certificate of occupancy the day before, reportedly told the official press corp, “This is a journey that’s still on, so a ways to go with the other phases, but this is a great first step. It’s a huge day for the Garden State of New Jersey.”

Ghermezian told TV news crews he was delighted and his investors were, too. “Everybody talks about the future of retail and the future of entertainment, and how you merge the two,” Ghermezian, said during a brief press event. “But there really isn’t a center on the planet that has done it to the degree that we’ve done in here.”

He told The Associated Press that he expects American Dream to surpass sales at the company’s two other mega malls, West Edmonton Mall and Mall of America, generating more than $2 billion in sales per year.

American Dream is looking to draw 40 million visitors a year as it builds itself into an entertainment and shopping destination rivaling Disneyland.

“You can make it your backyard playground if you live in Manhattan or even if you’re in New Jersey,” said Ken Downing. “It’s a staycation. So, it’s a little bit of competing with mindset and emotion, far more than a property or even Disneyland.”

On Sunday, screened off sections covered with plastic offered visitors a peek of the waterpark and a reminder that the project is very much still a work in progress.

The developer has vowed that American Dream will be fully operational next spring after a series of staged openings of the waterpark and ski slope with stores and restaurants finally opening in March, 2020.

Canada-based Triple Five took over the venture in 2011 with the promise to rival its hugely successful supermalls elsewhere.

To do so, it has secured deals with experiential concepts that include miniature golf and a partnership with CocaCola that could include a American Dream flavored beverages.

The mall was originally developed by the Mills Corporation and Mack-Cali Realty. After construction began in 2004, the project was expected to be completed and opened within two years. But five years later, in May of 2009, lenders withdrew following the Lehman Brothers collapse.

Prologis buys rival for $12.6B