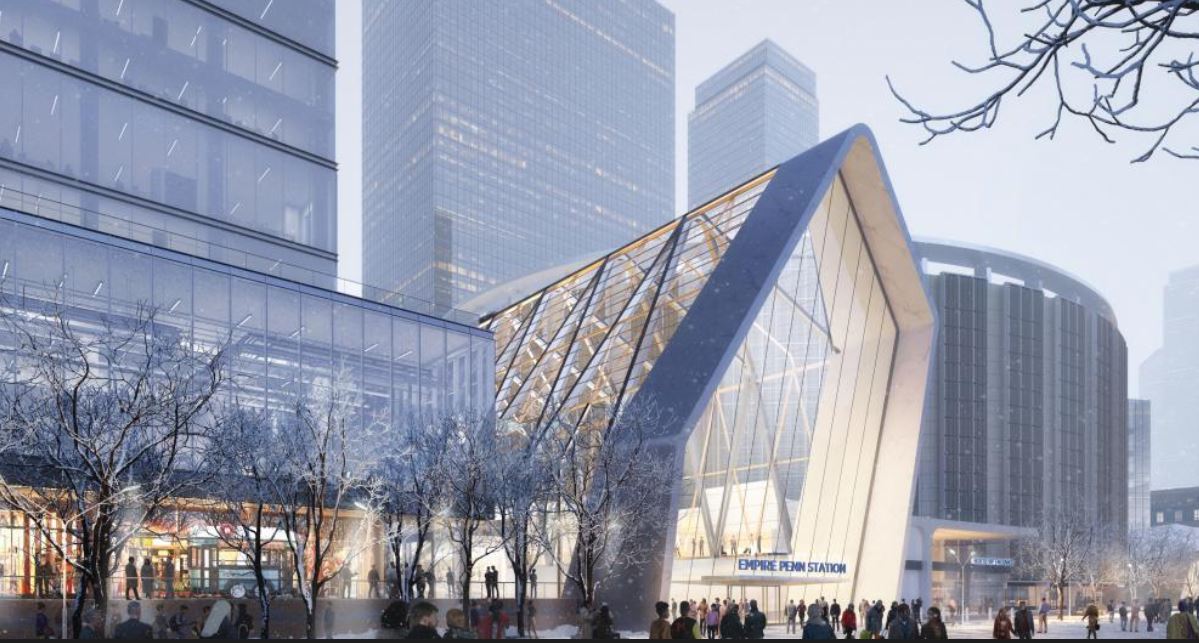 The Metropolitan Transportation Authority, Amtrak and NJ TRANSIT are working together on the plans to unify the separate railroads’ concourses into one open, light-filled space through two fundamental approaches following a yearlong strategic re-envisioning process, supported by FXCollaborative and WSP.

“The Empire Station Complex is a transformative project that will support and deliver on the long-delayed Gateway vision for the entire East Coast and enhance the passenger experience in North America’s busiest transportation hub. Together with our partners in New Jersey and at Amtrak, New York State is moving quickly to advance this comprehensive plan,” Governor Cuomo said. “These reconstruction alternatives provide a framework for a new and improved Penn Station that serves as an appropriate doorway to a world-class city. Every single day, we get closer to the end of COVID-19 and the beginning of a new post-pandemic economy, and this project will be a cornerstone of the revitalized New York City that we must build together.”

President of MTA Construction & Development Janno Lieber said, “Moynihan Train Hall proves that, under Governor Cuomo, we are again dreaming – and building – big.  Creating the Empire Station Complex is the next step, and it will alter the experience for hundreds of thousands of subway, LIRR, NJT, Amtrak and – soon – Metro North commuters.”

The existing Penn Station served 600,000 passengers daily prior to the pandemic and is critical for sustaining rail service and connecting people to jobs throughout the Northeast region, yet much of the current station is substandard, overburdened and aesthetically unpleasant. The reconstruction of Penn Station will result in an interconnected, modern station.

In combination with the new tracks and platforms to be built as part of Penn Station Expansion, the project will be capable of accommodating the future volume of customers using both the existing Penn Station and the newly expanded facility.

Ridership is expected to grow to 830,000 daily users in 2038, about 54 percent of whom will be MTA customers using LIRR, Metro-North and the subway, and 42 percent NJ TRANSIT customers, with the balance being Amtrak customers.

“As we work with our partners to advance the Gateway Program’s Hudson Tunnel Project, developing a vision for expanding and transforming Penn Station is the next big step we must take,” said Amtrak Board Chair Tony Coscia. “We look forward to a robust collaboration with Governor Cuomo, Governor Murphy, MTA, and NJ TRANSIT as we plan this generational investment for the future of America’s busiest transportation facility.”

During the yearlong strategic re-envisioning, the MTA, NJ TRANSIT and Amtrak examined a number of options for the reconstruction of existing Penn and the result is two fundamental approaches.

The first approach would transform Penn Station by leveraging the existing configuration’s two-level boarding configuration while improving existing Penn’s layout, creating a central atrium, and repurposing some of Amtrak’s space for NJ Transit’s commuters and operations. This alternative can be combined with a grand new entrance on Eighth Avenue and the light-filled West Train Hall in the space currently occupied by Madison Square Garden’s 5,600-seat Hulu Theater by purchasing the theater from MSG, increasing sightlines and better movement throughout the train hall. The two-level alternative could also incorporate new vertical access points to platforms, significantly widened concourses throughout, and new entrances at sidewalk level along Eighth Avenue.

This approach transforms Penn Station into an open, single-level concourse, eliminating all low ceiling heights and simplifying entry and exit routes from trains and the street level while also creating new large circulation areas bigger than the Great Hall of Grand Central Terminal. This alternative would remove 40 percent of the upper level so that all the public concourses could be two or three stories high, resulting in a more open, airy space throughout the station with better sightlines and more direct access to both tracks and platforms, and to station entrances/exits.

It would also feature a spacious, light-filled mid-block Train Hall with prominent new entrances on 33rd and 31st Streets near Seventh Avenue. The hall would bring in natural light with a new multi-story atrium built in the former taxiway between Madison Square Garden and 2 Penn Plaza, which has been closed for security since Sept. 11, 2001. This alternative moves MSG loading off 33rd Street, allowing 33rd Street to become a pedestrian-oriented shared street – greatly improving the streetscape.

The single-level alternative could also be combined with a grand new entrance on Eighth Avenue and the light-filled West Train Hall in the space currently occupied by Madison Square Garden’s 5,600-seat Hulu Theater by purchasing the theater from MSG.

The transformation of the existing Penn Station represents the latest milestone in the Governor’s 2020 State of the State proposal to create the new Empire Station Complex. On December 30, Governor Cuomo announced the long-awaited grand opening of the Moynihan Train Hall, the first step in realizing that vision.

Following the Biden Administration’s roll-out of the American Jobs Plan, Governor Cuomo, the MTA, Amtrak and NJ Transit will continue to work with the New York Congressional delegation and other state and federal partners to secure funding for the Gateway Program and the related Penn Station reconstruction and expansion projects.

Input on these alternatives will inform how the MTA, Amtrak and NJ Transit advance the designs. The public is invited to comment on the proposed station design alternatives by visiting https://new.mta.info/system_modernization/penn-station-reconstruction.

When an alternative is selected, the MTA, Amtrak and NJ Transit will work with federal partners on an Environmental Impact Statement for Penn Expansion, together with other federally-required processes, all in concert with ongoing public review.