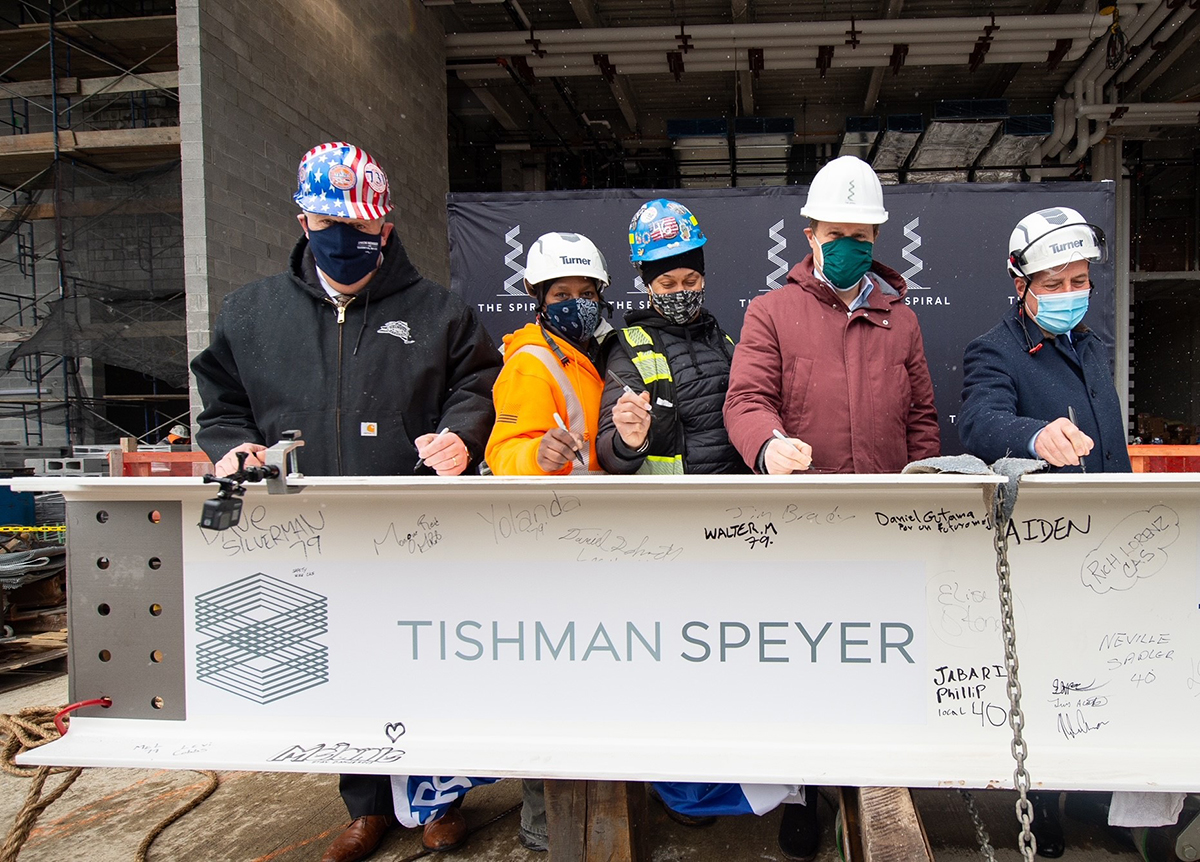 Once it reaches completion in 2022, The Spiral will feature a cascading series of landscaped terraces and hanging gardens as its signature element.  The terraces will ascend, one per office floor, in a spiraling motion to create a unique, continuous green pathway that wraps around the façade of the tower. The BIG-Bjarke Ingels Group-design ensures that each tenant on every office floor will have access to lush outdoor terrace space.

Pfizer, the biopharmaceutical company that recently co-developed the first Covid-19 vaccine approved for use in the U.S., will move its global headquarters to 746,000 square feet across 14 floors of the 65-story tower.  Renowned law firm Debevoise & Plimpton LLP is also relocating its headquarter to 13 floors totaling 531,000 square feet, while AllianceBernstein has committed to 166,000 square feet across three-and-a-half floors for its New York City offices.

“The Spiral represents the ideal collaborative workspace, now more important than ever, combining sustainable design with an elevated hospitality experience,” said Rob Speyer.  “The continued rise of The Spiral is a testament to our vision and optimism for New York City’s future. I am grateful to Gary, Peter and their teams for partnering with us on a plan that kept their members working and construction on schedule, while also safeguarding everyone’s health and well-being over the past year.”

“The milestone reached today is a testament to the hard-working union men and women of New York City, who – despite the extraordinary challenges of the past year – have gone above and beyond to get the job done,” said Gary LaBarbera, President of the Building and Construction Trades Council of Greater New York. “With the success of this project and the value that a union workforce brings to construction projects more clear than ever, we look forward to building and expanding upon the relationship with Tishman Speyer on future projects. The topping-off of The Spiral is yet another sign that New York’s future will always be bright.”

Located at the intersection of the High Line and the four-acre Bella Abzug Park, The Spiral will encompass a full block stretching from West 34th to West 35th Streets and from 10th Avenue to the park.

The Spiral, which is being built to a LEED Gold Standard, will feature soaring ceiling heights complemented by floor-to-ceiling windows and expansive views of Midtown, Central Park, the Financial District and the Hudson River.

The six-story base of the building will include a lobby with ceiling heights of up to 28 feet and entrances on Hudson Boulevard East and 10th  Avenue.  The base also will include approximately 25,000 square feet of first-class retail.