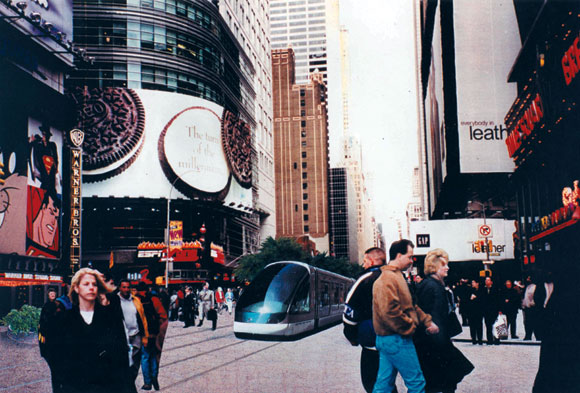 An international competition by a group advocating for a light rail corridor along 42nd Street is calling for entries to redesign one of the most iconic streets in the world.

The Institute for Rational Urban Mobility is spearheading a design competition open to architects, planners and urban designers around the world to envision a more pedestrian-friendly environment — served by a modern light rail tram.

The plan envisions a light rail running along 42nd Street from the Hudson River to the East River — 1st to 12th Avenues, a street that will “become essentially auto-free” while traffic on the Avenues will continue, according to Vision42design’s website.

The two-track light rail line would accommodate 150 foot long low-floor light rail vehicles, which would travel no faster than 15 mph, for pedestrian’s safety.

In addition to the East-West trajectory, the light rail line would also travel south from 42nd Street to the ferry terminals on the Hudson and East Rivers. The plans call for a light rail stop at each of the north/south avenues.

The design competition calls for participants to create designs that will help “enhance 42nd Street’s pedestrian ambiance and crosstown mobility, and provide much-needed open space,” according to the group’s website.

The group is encouraging designs that would cut down vehicle traffic and make way for pedestrian traffic — currently, nearly sixty percent of 42nd Street’s pavement is devoted to vehicle traffic, while eighty percent or more of the street users are pedestrians, according to the site.

The winning design chosen will be used as the face of the project to generate interest from the public and elected officials, and the designer will receive a cash award of $10,000. Four semi-finalists will share a prize of $5,000.

The top selected projects will also be featured in a story in The Architect’s Newspaper.