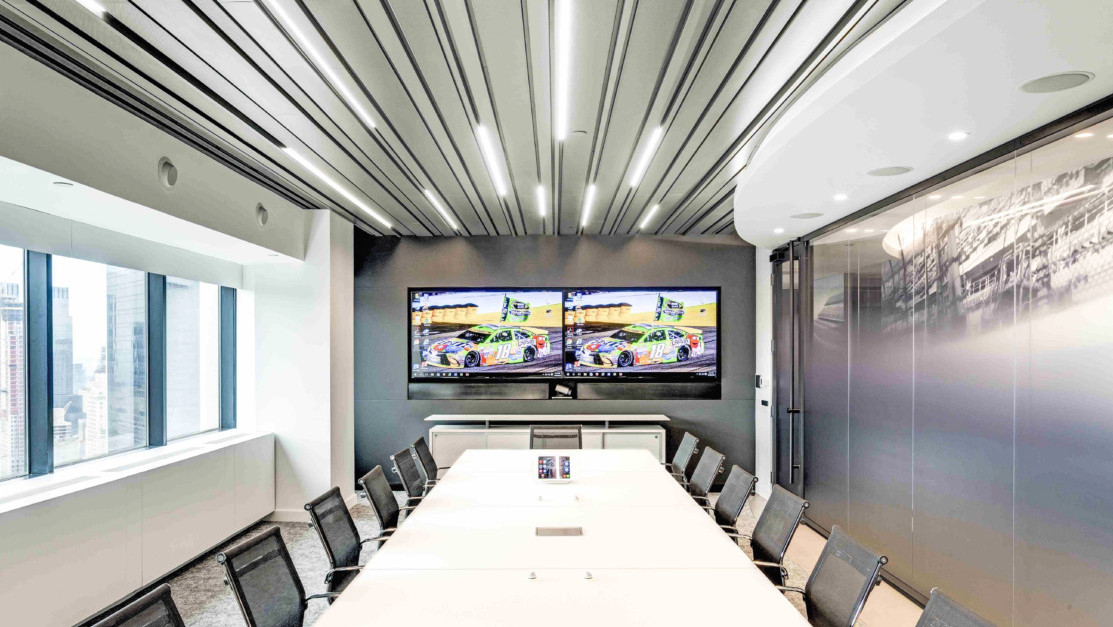 Ted Moudis gives NASCAR vroom with a view at 590 Madison

The Daytona, Fla.-based racing organization has moved into a 14,700 s/f office space on the 40th floor of 590 Madison Avenue.

NASCAR enlisted the architectural and interior design firm to design a new space that reflected its brand and corporate culture.

“Working on the New York City office for NASCAR, the pre-eminent racing organization in the country, was a wonderful experience,” said Michael Sinkew, Senior Associate, Design Director at TMA who oversaw the project.

“While we wanted to design the office with nods to NASCAR’s history and place in today’s culture, it was important that we did not make the space a museum. Rather, TMA created a more sophisticated office that is very sleek; white with glass walls and lots of concrete.”

With a rich but minimal color palette, the NASCAR space features 16 open plan workspaces and nine private, glassed-in offices with views of Central Park. There are also three conference rooms named after famous racecar drivers, and a smaller “huddle room.”

TMA heavily branded the office using NASCAR photography and artwork, as well as through the architecture of the physical space. Every form, object, color, material and light were selected to unify the identity of NASCAR in the space.

The ceiling above the reception area features dynamic, curvilinear forms representative of the racetrack itself. The concrete floor has integrated metal inlays that mimic the identical layout of the ceiling pattern, while the angular walls connect the floor and ceiling dynamically.

A custom-designed reception desk, lighting fixtures that appear “on the move,” a digital branding wall, and a meeting room built inside of a reflective cube that denotes the shimmer of oil are just some highlights of the space.

Despite its minimalist aesthetic, the space is not without nods to the automotive aspect of the NASCAR brand.

Two video screens near the office’s entryway – one 10 feet wide and another that is three feet wide – stream NASCAR races and other related footage.
Additionally, on the wall near the reception area is a giant logo made up of all of the tiny former logos NASCAR has used through its nearly 70-year history.

Black and white photos of the recently renovated Daytona International Speedway in Daytona Beach, Fla., where NASCAR holds the Daytona 500, its premier race, are placed on the hallway walls. The photo highlights the 31-degree sloped turns on the track, which is enhanced by the curved pattern on the ceiling and floor.