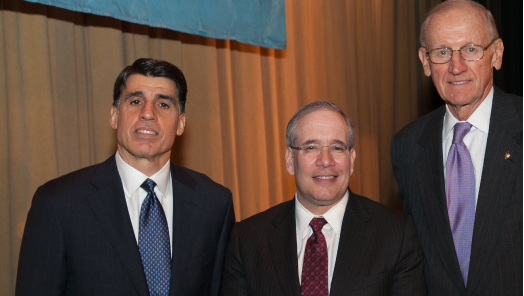 In his first presentation to the New York Building Congress as City Comptroller, Scott Stringer vowed to work with the construction industry to address its concerns and made a pitch to strengthen the City’s economy through investments in the growing high-tech, education and healthcare sectors.
Just two months into his tenure, New York City Comptroller Stringer told the more than 270 leaders gathered at the February 27 New York Building Congress Construction Industry Forum, “We can’t transform the City without you. This is the time to talk about how we go forward — together. Internally, we’re already talking about ways we can work more collaboratively.”
During a question-and-answer session with Building Congress president Richard T. Anderson and General Contractors Association managing director Denise Richardson, Stringer acknowledged and pledged to work with industry leaders to resolve longstanding issues concerning “No Damages for Delay,” prevailing wage, procurement procedures, and, more recently, the lack of prompt payment for contractors who participated in the City’s Rapid Repairs program after Superstorm Sandy.
In his prepared remarks, Comptroller Stringer noted that the City has recovered strongly from the recession, gaining back all the jobs that had been lost as well as five percent more.
He reported that the decline in financial jobs has been more than offset by the creation of over 100,000 jobs in education and health services, as well as by high-wage employment in the tech and information industry.
“To sustain this trend, we must continue to support the surging growth of our high tech economy,” he added. “And we must renew our investments in the educational, medical and cultural institutions that create jobs in all five boroughs.”
Comptroller Stringer concluded, “We’ve got to take advantage of the innovation percolating throughout New York—from Fordham and Montefiore in The Bronx to Wagner College and the College of Staten Island.
“By leveraging our universities, hospitals, and community institutions we’ll create more jobs for working families and more growth in our neighborhoods. We’ll harness the full potential of the tech economy in every corner of our City. And we’ll lay the groundwork for the next chapter of New York’s epic story.”
Prior to the Comptroller’s presentation, Iris Weinshall, co-chair of the Building Congress Higher Education Committee and vice chancellor for Facilities Planning, Construction, and Management at The City University of New York, updated attendees on a forthcoming Building Congress report that will document the impact that higher education construction has on the City economy and the prospects for capital spending by these institutions in the coming years.
The report will be issued in late spring.