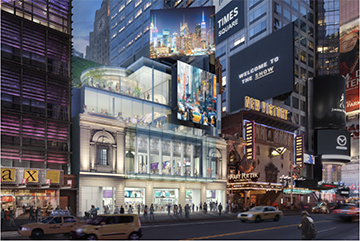 Beyer Blinder Belle is the architect for the project and Colliers is exclusively handling the leasing for the 43,165 s/f  property.

New York State and City established The New 42nd Street in 1990 to help give the blighted 42nd Street theaters a new lease on life.  Since then, it has helped re-purpose and re-invent the  Victory, Lyric, Apollo, Liberty, Empire and Selwyn theaters.

The restored theater will feature two terraces on the third and fourth floors, few columns 20 ft. ceilings and a glass box overhang.

Why voters should focus on affordable housing this election season

Industrial development to be recognized at ULI awards