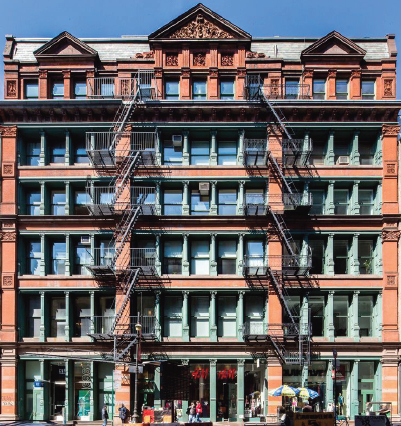 A block-through, retail co-op at the base of 515 Broadway in Soho is being offered for sale by Adelaide Polsinelli, Vice Chairman of Compass, along with Charlie Attias, Founder of the Charlie Attias Team.

Also known as 84-94 Mercer Street, the property is the center unit of the building, currently occupied by H&M, a Swedish multinational clothing-retail company known for its fast-fashion.

Located midblock on Broadway between Spring and Broome Streets, the property consists of a total of 30,000 s/f, of which 20,000 s/f is legal retail selling space. 10,000 s/f is light-flooded ground floor space which is duplexed with a 10,000 s/f lower level. There is an additional 10,000 s/f of sub- basement space. Although currently occupied, the retail unit can be delivered vacant for a user.

“This superbly renovated retail co-op, with generous frontage and 18 foot ceilings, with elevator accessed lower level, can be delivered vacant, making it ideal for an owner-user,” Polsinelli commented.

“With the retail landscape evolving, I am seeing a surge in owner users stepping up to purchase real estate for their own business.”

With a full floor-to-ceiling glass storefront, the space presents users with a distinctive canvass from which to show case their brand.

The building was constructed in 1884 as a commercial building for the estate of D.H Haight, replacing the St. Nicholas Hotel, which was once the largest and most luxurious hotel in the world, at a time when this area was a fashionable entertainment and shopping district.

The present six-story, block-through, Queen-Anne style building was converted to residential co-operative use in 1978 and exists as the largest co-op building in SoHo.

While the pandemic dealt a major setback to Soho, the shift in retail shopping patterns to e-commerce, added a double blow to an already struggling retail market. There have been signs of a strong resurgence as more retailers sign long-term leases.

“This boost in activity is just what SoHo needed to remind retailers and investors that we are in a once in a cycle opportunity,” said Polsinelli.

“As we turn the corner on Covid, more businesses will be placing bets on real estate. What better time to buy, than at the bottom of a ten year cycle?”

NYC brokers get their groove back as recovery takes grip