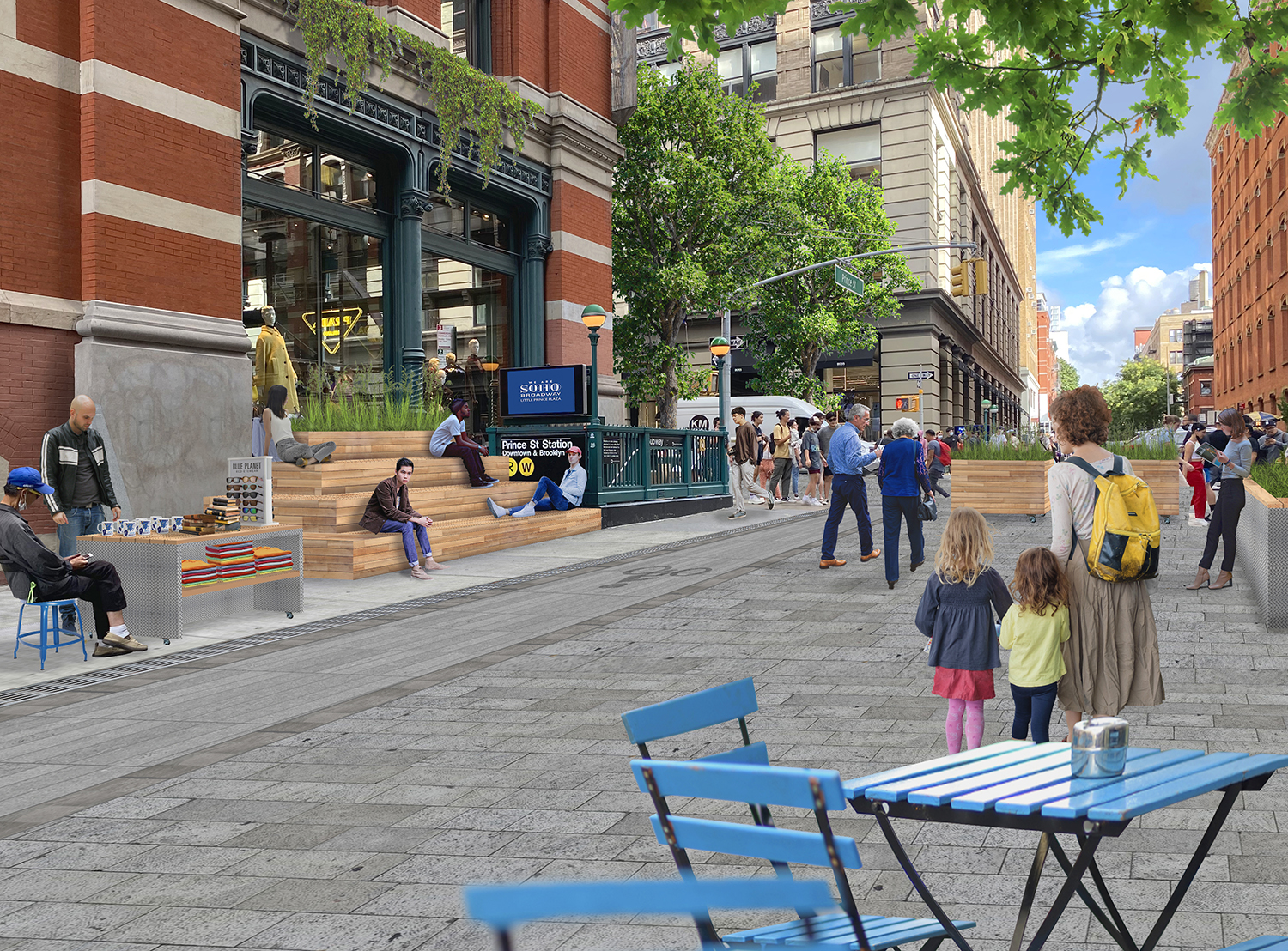 Soho residents are getting a chance to see how their neighborhood could look if a new “Vision Plan” aimed at turning some of its congested streets into pedestrian plazas and reclaiming Broome Street from Holland Tunnel traffic gets the green light.

Every Saturday throughout October, the local BID, the SoHo Broadway Initiative (SBI), is holding a temporary public demonstration along Prince Street showcasing the new ideas for improving the area through a Public Realm Framework + Vision Plan.

Nicknamed “Little Prince Plaza,” the street will be closed to vehicular traffic between Broadway and Mercer Street, opening up space for people to stroll and sit at park benches and tables.

The aim is to see how people use the space, learn what works well and what can be improved, and collect feedback for the Public Realm Framework + Vision Plan.

“We are excited to partner with residents, business owners, and other local stakeholders to advocate for a more pedestrian-friendly SoHo,” said Mark Dicus, executive director of the SoHo Broadway Initiative. “In addition to increasing space for people, reducing traffic, and improving business operations, these changes will help strengthen SoHo’s position as one of New York’s most iconic and inclusive neighborhoods that welcomes local residents as well as people from around the city and the world.”

The demo comes as a controversial rezoning of a 56-block stretch of SoHo and NoHo stalls amid local concerns about overbuilding and commercialization. Rejected by the local Community Board, the rezoning seeks to add thousands of new apartments to the neighborhood while righting decades of special permit approvals that allowed a patchwork of retail and residential uses while sidelining any type of infrastructure or service delivery upgrades.

But she has given her wholehearted support to the Vision Plan, which has been on the BID docket since well-before the rezoning.

Calling it a “bold and impressive plan for how to better manage our shared public space in SoHo,” Brewer said, “The Four Key Moves that this draft plan proposes for Broadway, Prince Street, Mercer and Crosby Streets, and Broome Street that prioritize pedestrians, bus riders, cyclists, and importantly deliveries are exactly the kind of forward-thinking designs that the SoHo Broadway neighborhood has always needed, but are especially important as we begin our recovery from the pandemic.”

Those Four Key Moves are:

Create more space for people on Broadway: Broadway will be transformed into a curbless bus and pedestrian priority street from Houston Street to Canal Street, seamlessly linking the east and west sides of the street. By diverting all non-local vehicular traffic from Broadway to the perimeter of the SoHo ‘superblock’ (defined by Houston Street, the Bowery, Varick Street, and Canal Street) and improving and streamlining bus, emergency, freight, service, and for-hire vehicle operations, sidewalks can be expanded to improve pedestrian flow and create more comfortable spaces that include amenities such as greenery, seating, and public art.

Reclaim Broome as a local street: Broome Street will no longer operate as a tunnel on-ramp, and instead offer expanded, usable public space, greenery, and cycling facilities that serve the needs of SoHo residents, workers, and visitors. This will be achieved through diverting all tunnel-bound traffic to the perimeter of the SoHo ‘superblock;’ reducing vehicular travel lanes from two to one, adding a dedicated westbound bikeway linking Chrystie Street and Hudson Street; and allocating remaining space for public realm amenities.

Adelaide Polsinelli, a vice chairman at the real estate brokerage Compass who specializes in the sale of commercial retail property around the city, said the Vision Plan offers a constructive solution to a longtime problem in the neighborhood.

“In many ways, Soho has become a victim of its own success as a retail hot spot,” said Polsinelli. “Its eclectic mix of stores, boutiques, bars and restaurants have drawn ever more visitors while the number of businesses operating there has mushroomed. All of this has happened during a distinct lack of improvements to the streetscape and the type of small-scale improvements offered in the Vision Plan would go a long way to improving quality of life for everyone.”

Local resident Anders Host agrees. “I think this vision is a giant leap forward in terms of quality of life for those of us who live in and visit SoHo,” said Holst. “SoHo is such a great neighborhood, with cool restaurants, bars, and stores and charming cobblestones and cast-iron architecture, but there are some important issues that we need to fix.

“The Broome Street Symphony, which is performed every afternoon with cars honking, bumper to bumper, is not only dangerous but also detrimental to our health. I am glad we are taking a bold stance on these issues to create a greener and more human environment for future generations.”

The popular Museum of Ice Cream at 558 Broadway is another supporter. Cofounder Manish Vora said she believes the future of NYC is a return to a carless, pedestrian- and bike-friendly city.

With no official mandate to actually implement the Vision Plan, the SoHo Broadway Initiative said that, for now, they’ll be looking for community feedback from the October demonstrations and conducting traffic and parking studies.

They are also looking to engage with local elected officials, City agencies and community stakeholders to figure out how much support there is for the plan overall and where the money to implement it would come from.