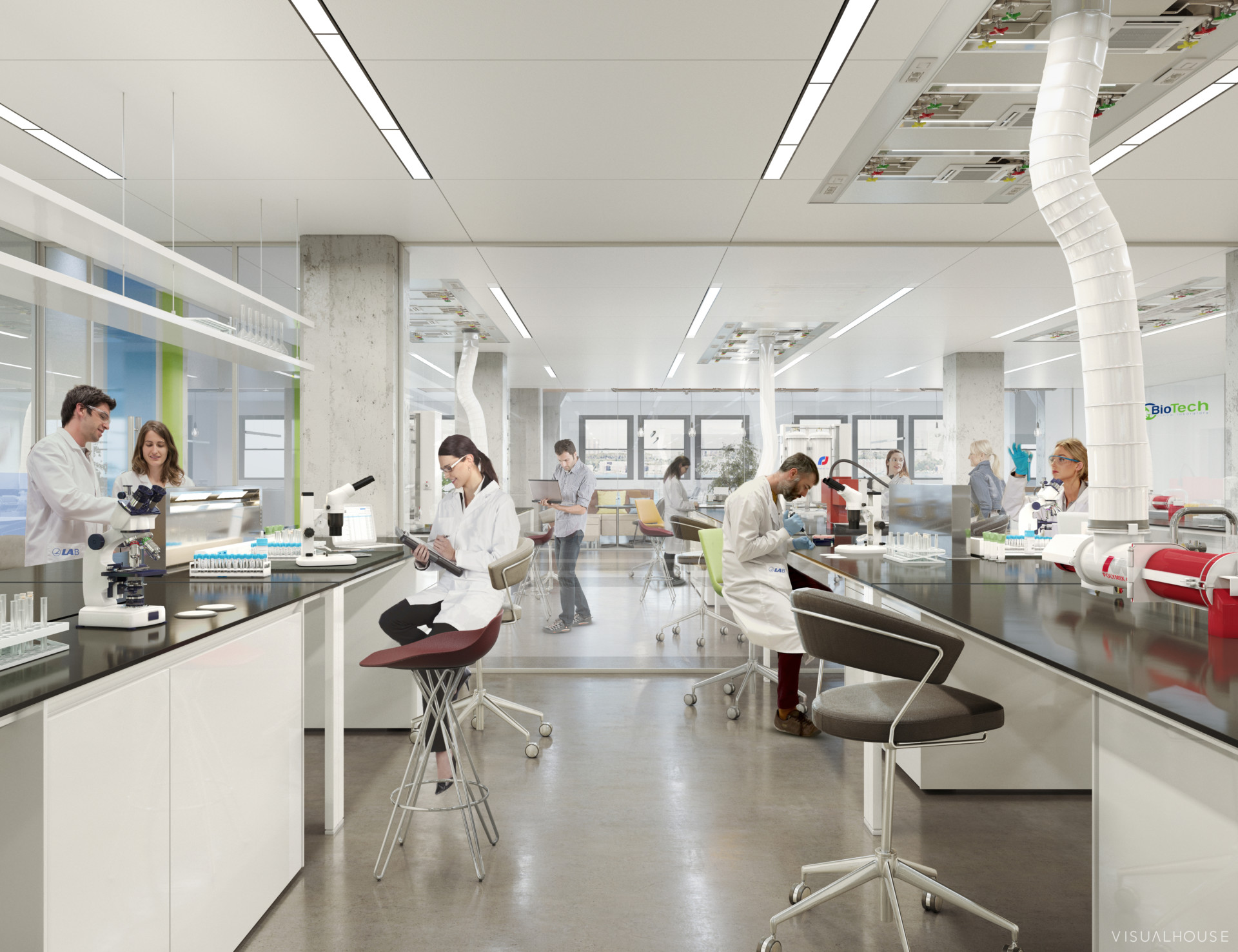 Designed by architecture firm Perkins + Will and engineering firm BR+A, the 15,000 s/f space (rendering pictured top) is being outfitted to accommodate up to two tenants with dedicated lab space and a private office for each tenant, along with a shared conference rooms, meeting spaces, café/lounge and open collaborative workspaces.

The facility, which will begin construction this month, will include everything that a tenant needs to “plug-and-play” which is especially crucial for early stage research companies.

The wet lab will be located within the  Hudson Research Center, a collaborative hub with over 150,000 s/f of life science  lab and office space the partners are creating at 619 West 54th, a 325,000 s/f mixed-use building on the West Side,

Current building tenants include the New York Stem Cell Foundation which opened its new 42,000 s/f research and executive headquarters in 2017.  Other tenants include Rogosin Institute and Manhattan Surgery Center.

With an expected January 2019 completion date,  Marty Burger, CEO of Silverstein Properties, said, “New York City’s biotech and life sciences sectors are about to expand in an unprecedented way, in large part thanks to the leadership of Governor Cuomo and Mayor de Blasio.

“Our company has a long history of creating spaces that foster innovation and collaboration, from the new World Trade Center to 619 West 54th Street, and we look forward to providing a cutting-edge research company with a top-of-the-line facility here in Manhattan.”

Taconic and Silverstein’s plans align with the city’s ongoing initiative to expand Manhattan’s life sciences sector in an effort to compete with industry leading cities such as Boston, MA and San Francisco, CA.

“We have significant demand from early-stage companies, particularly those founded right here in New York City,” said Matthew Weir, Senior Vice President, Taconic Investment Partners. “By building flexible pre-built research facilities, we are providing these companies space to conduct their initial research and the opportunity to grow over time.  This type of flexibility is paramount for early stage companies and is important for the overall growth of the New York life science market.  The Hudson Research Center is leading the charge in investing in the emerging New York City life science market.”

As the next phase of the building’s pre-built lab initiative, Taconic and Silverstein have commenced design on 32,512 s/f,  spanning an entire floor at the Hudson Research Center, which will accommodate one to four research tenants. This next phase of space is expected to deliver in fall/winter 2019.

CBRE’s Steve Purpura and Jonathan Schifrin are overseeing leasing for the facility.