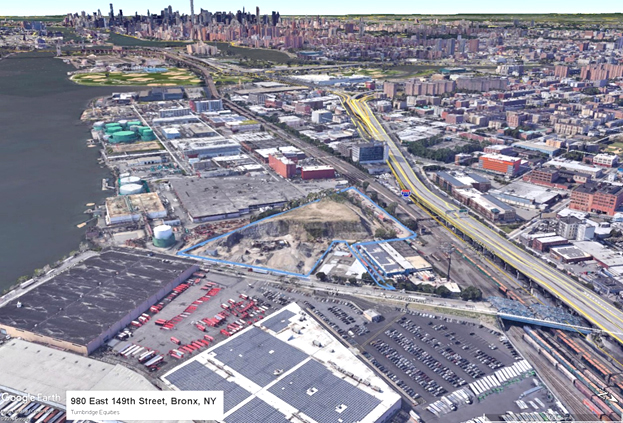 Turnbridge Equities has expanded its last mile industrial portfolio in New York City now nearly two million square feet with a $56 million Bronx purchase.
The company announced it acquired a 10.2 acre land site at 980 East 149th Street in the Bronx (pictured top) for $56.2 million in an off-market deal with longtime owner, Con-Agg.
The property, which is entitled for nearly 900,000 s/f of industrial warehouse use, is fully leased to Til-Con, a concrete recycling company.
Located at the intersection of the Bruckner Expressway/I-278 and East 149th Street, with 600 ft. of frontage along Bruckner Boulevard, the site is within minutes of I-95, I-278, I-895 and the Robert F. Kennedy Bridge to Manhattan and Queens.
It is adjacent to the CSX railway and less than two miles from the Hunts Point Food Distribution Center, which generates over $3 billion of annual economic activity.

As well as plentiful nearby mass transit options, the site is located in an Opportunity Zone, a new federal program that provides tax incentives for investments in new businesses and commercial projects in low-income communities.
Turnbridge — which did not purchase the site through an Opportunity Fund — plans a long-term hold with a potential ground-up industrial distribution development.
Ryan Nelson, managing principal of Turnbridge Equities, said, “As evidenced by our multiple investments in the sector … we’re big believers in the New York Metro’s last mile industrial market and hope to capitalize on the surging growth of e-commerce and just-in-time delivery amid shrinking supply of space to accommodate those users.”
Turnbridge was represented by Joel Feinberg and Tom Cisco of Feinberg Brothers. HFF arranged the debt financing, which was provided by ACORE Capital.

West Village parking garage owner Jack Jakub has tapped Avison young to sell his premises for $49 million.
The brokerage firm has billed the 30,000 s/f five-story elevator building at 332 West 11th Street as “one of the last mega-mansion opportunities in the West Village.”

James Nelson, head of Avison Young Tri-State Investment Sales, added, “Located between Greenwich and Washington Streets on one of the neighborhood’s best blocks, this fantastic structure is envisioned as a townhouse or condominium conversion.”
The marketing team includes Brandon Polakoff, David Shalom and Bradley Rothschild.
The building, which currently consists of a parking garage and detailing shop, is within the R6 zoning district, allowing for residential uses, community facility uses, and commercial uses.
The property’s ground floor has 13 ft. ceilings and includes a 5,000 s/f English basement.

CBRE today announced the $13.3 million sale of a 60,000 s/f Class A office building at 966 South Springfield Avenue in Springfield, New Jersey.
The property serves as the national headquarters for the watch and jewelry divisions of LVMH Moët Hennessy Louis Vuitton SE, a French multinational luxury goods conglomerate headquartered in Paris.
CBRE’s Tri-State Investment Properties Team of Charles Berger, Elli Klapper and Mark Silverma represented the seller, a tenancy-in-common, and procured the buyer, a private investor going through a 1031 Exchange.
Situated

on 2.70-acres, the state-of-the-art facility was renovated in 2003 and is triple net leased to LVMH, which has invested its own money in the property over the course of its 20-year occupancy.
“We were able to generate tremendous interest from local, national and even international buyers before settling on a 1031 Exchange buyer,” said Berger.
“We are thrilled to have been able to secure such aggressive pricing for our client, both from a cap rate and price per square foot perspective, while at the same time providing an opportunity for the buyer to diversify their portfolio on a trophy asset with an in-place long term investment grade tenant in a prime location in one of the most affluent neighborhoods in New Jersey.”

The Amirian Group is set to auction off two new East Village apartment buildings as it looks for “instant liquidity” from the venture.
Paramount Realty USA announced it will auction the pair of six-unit buildings at 436 and 442 East 13th Street later this month. Amirian Group, and its former partner Bridgeton Holdings, bought the sites in 2015 for $9.5 million and built Thirteen East + West, two nearly-identical condo buildings, each with a finished roof-top terrace and private garage
In a statement issued by paramount, the sponsor said, “We could obviously proceed with the traditional route, which, given current absorption rates, would probably yield a sell-out of most or all 12 units in about a year.
“But when we considered the concept of a bulk auction with Paramount Realty USA, a lightbulb went off in my head. The prospect of instant liquidity, both for my investors now and for my next projects going forward, justified going the auction route. If I were a buyer, I’d buy these buildings, lease up the units, and sit on the income until the market strengthens.”
According to Paramount, the buildings have approved condominium offering plans that provide for a $37 million sell-out.
The auction provides bidders with an opportunity to name their price on some or all of the units on a bulk basis.

Avison Young’s Tri-State Investment Sales group has been named the exclusive agent for the sale of 324-326 Grand Street, a newly developed, 27,500 s/f mixed-use elevator building on the Lower East Side.
The asking price is $33 million. James Nelson, Brandon Polakoff, Philip Bowman and Bradley Rothschild are marketing the property on behalf of Empire Capital Holdings and ANDA Realty Capital.
The residential portion of 324-326 Grand Street is master leased to QUARTERS, a European co-living tenant that leases rooms to young professionals and tech entrepreneurs.
Of the 16 residential apartments, 15 are free market and occupied, while the extra apartment serves as a common area.
The Atelier, a speakeasy bar, occupies the lower level. The ground floor has two additional retail spaces, including an 1,800 s/f space leased to a pop-up Japanese gallery and a 2,000 s/f space to the west of the lobby currently on the market for lease.

Holliday Fenoglio Fowler brokered the sale of the three recently-restored early 20th century buildings, including the City Trust Building in downtown Bridgeport. City Trust (955 Main Street) is an 11-story building of 135,544 s/f. The building is made up of 117 apartments and 43,222 s/f of retail with tenants including Citibank and 4 Corner Billiards.
Arcade Mall (1001 Main Street) is a 4-story building with 23 apartments and 32,046 s/f of retail occupied by Artstock, Burger Joint, and Boys and Girls Village.
Golden Hill (144 Golden Hill Street) is an 8-story building with 36 apartments and 22,751 s/f of retail space.
The HFF team representing the seller included Stephen Simonelli, Jose Cruz, Michael Oliver, Kevin O’Hearn, Steven Rutman, JB Bruno and Dana Brome. A TEI acquisition team led by Max Pastor and Brian Soto spearheaded the transaction for TEI.