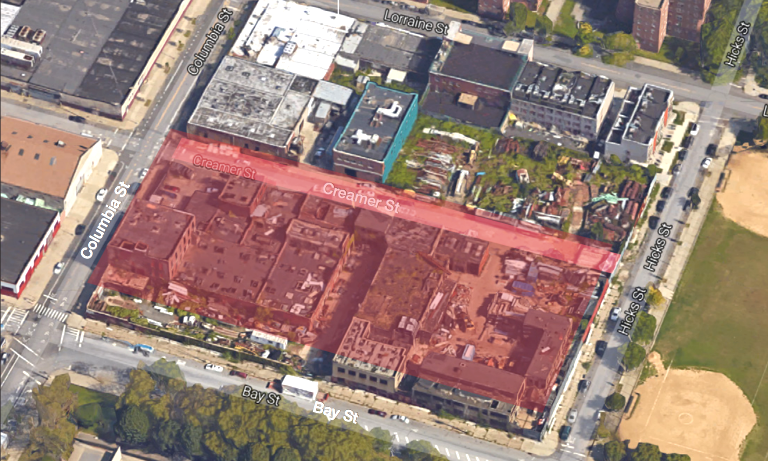 The site, located at 537-555 Columbia Street, consists of land and multiple industrial buildings that have been vacated to allow redevelopment.

“This is a unique transaction structure and something we are well-versed in,” said Leary. “It is tax efficient and ,given that current capitalization rates are at all-time lows, it has become difficult to find replacement properties with value, often driving sellers to seek opportunities outside New York City to obtain higher returns.

“This type of structure significantly improves property values for ownership based on the long-term stable cash flow and allows for continued ownership of an improved and highly financeable asset in New York City.”

“We are seeing strong demand for industrial properties city-wide. It’s a function of the booming e-commerce market and the demand for warehouse and logistics space to meet this phenomenon, as well as the lack of inventory for quality industrial buildings and industrial-zoned sites,” said Kim.

Senior Executive Managing Director, David Schechtman and Managing Directors, Lipa Lieberman and Abie Kassin, represented the seller, and procured the buyer, a private family via a 1031 exchange, which was advised by Steven Dweck of Marcus & Millichap.

“The property features prime retail and is located on one of the best corners in Williamsburg, at the intersection of Kent Avenue and North 7th Street, which capitalizes on many of the favorable trends in the area while also remaining true to the original aesthetic of the neighborhood,” said Lieberman.

The property sold for $22 million, which equates to $106,796 per unit. Marcus & Millichap Capital Corp. (MMCC) arranged $19.8 million in acquisition financing.

Fahri Ozturk, vice president investments in Marcus & Millichap’s New Jersey office, said over 100 investors from 15 offices across the country checked out the offering.

“East Orange offers investors the opportunity to invest in an urban market with strong metrics such as high demand, low vacancy, and strong cash flows with significant upside.”

Built in 1950, Robert Towers is located at 60 S Munn Ave. near the East Orange and Brick Church train stations, Interstate 280 and the Garden State Parkway. The property is 10 minutes from Newark International Airport.

Marcus & Millichap has been selected to exclusively represent the Unification Theological Seminary in the sale of its 260 acres campus, located at 30 Seminary Drive in the hamlet of Barrytown, Town of Red Hook, New York.

Used as a religious seminary for over 80 years, the parcel includes a 120,000 square foot main building, and several ancillary buildings comprising a total of over 150,000 square feet. The asking price is $17.995 million.

The property has a colorful and rich history dating back to the 1700’s. In 1929 it was purchased by John D. Rockefeller; the main building was built by him in 1930 for use by the Christian Brothers. In 1974 it was sold to its present owner.

“The distinct nature of this property will command the attention of a specific clientele interested in purchasing this type of asset, including religious institutions, schools, cultural centers, training centers, and health related facilities,” said Jim Evans, a senior real estate broker at Marcus & Millichap, who, along with Victoria Fisher, is representing the seller.

“The campus of Unification Theological Seminary is an iconic property and we look forward to finding the right buyer with a vision to build on the steep history of this asset,” adds Fisher.

The campus, affording Hudson River and Catskill Mountain views, consists of nine buildings. The main structure is an “H” shaped building with three stories on the east side and four stories on the west side.

It houses offices, classrooms, guest rooms, dormitories, an infirmary, a two-story gym, a two-story library, a 400-seat auditorium, and a 100-seat lecture hall.

The two wings are connected by a center core containing a full commercial kitchen and dining rooms on the first floor and above that a soaring, light-filled, pastoral chapel.