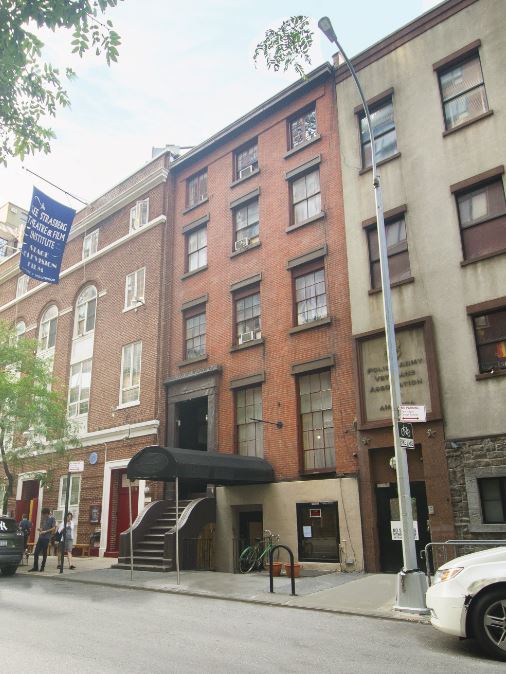 Cushman & Wakefield announced the sale of 117 East 15th Street, a 5-story multi-tenanted brownstone in the Gramercy Park neighborhood of Manhattan, just off Union Square. The 6,800 s/f walkup building consists of six residential units, a live-work loft on the parlor floor and a restaurant on the ground floor and basement The final closing price was $11 million, or $1,618 psf.
Cushman & Wakefield Vice Chairman John Ciraulo led the marketing efforts with Senior Director Craig Waggner on behalf of the seller, Jacobson Group. The property was purchased by a foreign buyer operating under the name Three Sixty CC Inc, who was represented by Edward Kim and Alex Lee of KW Commercial.
“The property’s full occupancy, existing cash flow and ideal location just a half block from Union Square made it an excellent investment opportunity for the buyer,” said Ciraulo.
117 East 15th Street is a 22.5’-wide walkup building located on the north side of tree-lined East 15th Street between Union Square East and Irving Place. The property features a parlor floor with 14’ ceilings and six residential apartments above, including three one-bedrooms, one two-bedroom and two studios. Recent upgrades to 117 East 15th Street include a new boiler and updated electrical.
Waggner said, “The property also came with approximately 7,184 square feet of unused air rights that can be utilized or transferred, or the entire building could be razed to make way for an approximately 13,984-square-foot boutique development once the existing leases expire.”

The joint venture between Garrison Investment Group, Axonic Capital LLC, Taconic Capital Advisors and Onyx Equities, LLC announced its acquisition of One, Two and Four Gateway Center in Newark, N.J. Prudential Financial, who has held its global headquarters in Newark since its founding more than 140 years ago, will participate as a co-investment partner. This 1.6 million s/f transaction represents New Jersey’s largest office deal of 2018.
The joint venture will pursue a multi-million dollar modernization plan to create a more vibrant retail Concourse.
New ownership said the improvement plan will reinvent the Concourse as a destination, and spur significant demand from retailers and corporate office users who prioritize access to transit and a talented, diverse workforce.
“We are honored and thrilled to be part of Newark’s renaissance in such a significant way. Gateway Center is now positioned to become Newark’s greatest amenity, and arguably New Jersey’s most important center of commerce, talent and connectivity,” stated John Saraceno, Managing Principal and Co-Founder of Onyx Equities.
Increased residential investment in Newark and Harrison coupled with an uptick in corporate relocations to Newark sparked the joint venture’s interest in the Gateway Center opportunity.
Onyx Equities will serve as the operating arm, overseeing asset and property management, tenant relations, leasing and construction.
Adam Karafiol and Matthew P. Flath of Onyx will lead office and retail leasing efforts. The JLL team of Tim Greiner, Blake Goodman and Colleen Maguire has been assigned as Agent for Gateway One and Two. The RKF team of Glenn Beyer, Jerry Rockoff, and Rob Mackowski has been assigned as Retail Agent.
Gensler was selected as project architect, led by Dana Nalbantian. Rebranding and marketing assistance will be provided by Real Estate Arts, led by Michael Goodgold.
JLL’s capital markets group led by Managing Directors Thomas Walsh and Joseph Garibaldi served as investment sale broker in the transaction.
“Well-capitalized and united ownership will provide the key ingredients in the Gateway Complex reclaiming its reputation as one of the best transit-oriented office portfolios in the Northeast.” Walsh said.

GFI Realty Services announced the $15.5 million sale of 2261 Ocean Avenue, a six-story, 54-unit apartment building in the Madison section of Brooklyn.
GFI Senior Director Erik Yankelovich represented the seller, while GFI Associate Director Josh Orlander procured the buyer.
The 52,812 s/f corner property contains 54 rent-stabilized apartments. The new buyer plans to implement modest renovations and lease up the building’s several vacant units.
“The property has been owned for decades by a group of local investors, and they decided to liquidate this jointly held property and capitalize on the current strength of the market,” said Yankelovich. “We received interest from several potential buyers, and we were able to negotiate a very strong deal for the seller, with the $15.5-millon sales price representing a cap rate of approximately 3.3 percent.”
The property is situated in the Kings Highway corridor and has access to the area’s residential and commercial strength,
“The buyer was looking to expand his significant local portfolio, and he was very intrigued by this elevator building,” said Orlander. “With rents currently below market rates, the property offers a lot of long-term upside, and the buyer was eager to acquire a well-maintained asset of this size in such a strong neighborhood.”

Hodges Ward Elliott announced the sale of 424 Bedford Avenue, on behalf of seller East End Capital and KBS. The 63,866-square-foot, 20-story luxury rental property is located between South 8th and South 9th Streets in the South Williamsburg neighborhood of Brooklyn and was sold to Global Holdings Group for $43.8 million with an assumption of the in-place debt.
An HWE team of Will Silverman, Managing Director, Paul Gillen, Managing Director, Daniel Parker, Managing Director and Ariel Tambor, Vice President, advised the seller on the transaction and procured the buyer.
“424 Bedford has the best ratio of uniqueness to size we have ever seen,” said Silverman. “We are not aware of any other 20-story building on half-acre lots for under $50 million.”
The building includes 66 units comprised of a mix of one-and-two bedroom apartments and represents the tallest building in South Williamsburg. The sale of the property, which also includes a gym, gardens, BBQ area, dog run, a rooftop deck and 24 parking spots, is the first Global Holdings Group foray into the multifamily rental property market.
“Williamsburg is now globally recognized as the epitome of cool,” Parker said. “There are few neighborhoods in New York City with a better mix of nightlife, dining, shopping and artistic sensibilities than Williamsburg’s south side.”

PSEG Power announced the sale of the sites of its retired Hudson Generating Station in Jersey City/Secaucus and Mercer Generating Station in Hamilton Township to Hilco Redevelopment Partners.
Both coal-burning power plants were built in the 1960s and retired in June 2017.
After reviewing more than two dozen proposals, PSEG selected Chicago-headquartered HRP based on their strong environmental track record and demonstrated success in managing complex redevelopment projects, including retired coal plants. HRP envisions redeveloping the sites as state-of-the-art industrial parks to serve the growing need for regional warehouse distribution hubs in central and northern New Jersey.
“We hope these sites will continue to be productive assets for the communities that hosted the plants for decades,” said John Paul Cowan, senior vice president of operations for PSEG Fossil. “That’s why we sought out a buyer that understands the strategic value of both locations and will leverage the great labor pool in the surrounding areas. Hilco Redevelopment Partners has a track record of success taking on both the remediation of these types of industrial facilities and, most importantly, redeveloping them into economic engines for the people who live in and around the sites.”
HRP also recently acquired retired coal power facilities from Exelon in Boston and NRG in Chicago.
“We’re excited about this acquisition from PSEG,” Hilco Global Chairman and CEO Jeff Hecktman said. “The Hilco Redevelopment team has developed a strong reputation for taking on these types of large-scale industrial development projects across the country, having previously purchased obsolete coal-fired power plants from NRG and Exelon. These are unique projects that require a special skill set in order to bring new economic development and jobs back to communities.”

ShopOne Centers REIT announced its entry into the Washington, D.C. market with the purchase of Eastgate Shopping Center, a 138,779 s/f shopping center located in Lanham, Maryland. The shopping center was bought for $28 million from Zimmer Development Company.
Eastgate Shopping Center is anchored by a 56,526 Giant Food, the leading market share grocer in the region. The property also features a diverse mix of leading national, regional and local retailers including McDonald’s, KFC, Huddle House, Drake’s Place Salon Worl and others.
ShopOne intends to leverage its proven platform to enhance Eastgate Shopping Center’s value through operational and capital improvements.
“We are pleased to continue our growth along the I-95 corridor by capitalizing on the rare opportunity to purchase a well-located asset that is anchored by the region’s leading grocer,” said Michael Carroll, chief executive of ShopOne. “Eastgate Shopping Center marks our third acquisition in this dense, high barrier to entry corridor and we intend to continue to scale our growth along this major roadway. We are confident that our leasing and management expertise can allow us to maximize the upside at the property.”