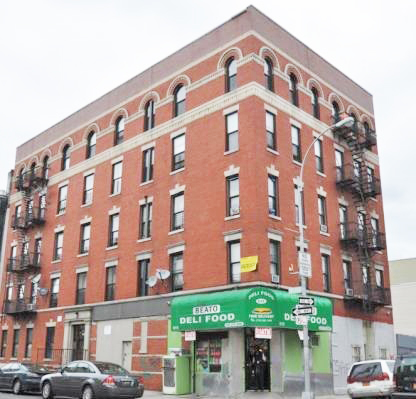 “The purchase of 185 Marcy Avenue provides us with an unprecedented opportunity to reposition this under-appreciated asset as an office building that will contribute to the thriving Williamsburg neighborhood,” said Elliot Neumann, the firm’s COO.

“We are delighted to add this property to our portfolio of investments throughout New York City.”

Acuity has been active in adding to its New York City portfolio. Two months ago, the firm purchased a six-story Washington Heights building for $20.8 million.

William Lang of Winston Strawn represented the firm in the transaction. The seller was Marcy Square LLC.

This is Brooklyn Standard’s first acquisition in the Bronx.

Co-founder Benji Kohn said that over 80 percent of the apartments are rent stabilized. The company plans to improve the buildings and offer newly renovated apartments.

“We love this area, which is near Little Italy and Fordham University, and has a great sense of community,” added Kohn.

Josh Goldflam, managing principal of investment sales firm Highcap Group, has been hired to sell two retail properties, both with Triple Net lease credit tenants in New York and New Jersey for a total package price of of $33.3 million.

The first property is located in the high-end suburb of Westfield, New Jersey, at 260 North Avenue East.

The property is a shopping center in the middle of town with Walgreens as the anchor tenant, and five smaller stores including Supercuts, with all tenants being on NNN leases.

The retail center boasts 39,000 s/f on over an acre with a large parking lot.

“This is a very stable asset with long-term, high credit tenants and a corporate guarantee from Walgreens Corporate,” noted Goldflam.

“It’s 100 percent occupied and all tenants, with the exception of Walgreens, have thre-to-five percent annual increases.”

The second property is located on the intersection of 1968 Vetrans Memorial Highway in Islandia in Suffolk County, just south of the Long Island Expressway at exit 57.

The property features two retail buildings consisting of a total of 17,568 s/f on 1.62 acres with a shared parking lot. The corner building houses a RiteAid store on a NNN lease for another nine years with a corporate guarantee. The other building has been renovated and subdivided into three new stores each with a new 10-year NNN lease with Dunkin Donuts, T-Mobile Cellular, and a local Pizzeria each with increases and options.

CBRE’s Institutional Properties quarterbacked the dela, which was part of a 1031 Exchange.

According to local news blog Syracuse.com, UA Properties just sold The Chimes Building, one of downtown Syracuse’s most prominent buildings, for nearly seven times more than its previous owner paid seven years ago.

CBRE’s Jeffrey Dunne, David Gavin and Travis Langer, in collaboration with Philip Heilpern of the CBRE Long Island office, represented RA 150 Motor Parkway LLC, an entity controlled by RNY Property Trust, in the sale of 150 Motor Parkway. The team was procured the buyer.

150 Motor Parkway is a 201,258 s/f office property located at the gateway to Hauppauge Business Park, the largest park on Long Island and second largest in the country with 18.5 million square feet of office, industrial and R&D space.

The proeprty has corporate amenities that include a theater-style media room and boardroom, café, health club and bank branch with drive-through ATM as well as parking.

Dunne commented: “150 Motor Parkway provides strong in-place cash flow with significant upside through lease-up of the 65,000 s/f of vacancy. Combined with its easily accessible location, 150 Motor Parkway was an ideal property to satisfy the buyer’s 1031 exchange.”

US Properties sold 500 S. Salina Street in Syracuse for $6.68 million, according to public records. It paid $1 million for the building in November 2009.

Thompson Square is a 117,944 s/f shopping center anchored by a 54,300 s/f ShopRite. The center is 90 percent leased and includes national, regional and local tenants.

Robert Heidenberg, president and CEO of Heidenberg Properties, commented, “The purchase of Thompson Square provides us with that rare opportunity to acquire a supermarket-anchored center with the area’s dominant grocer, and increase value by enhancing the overall tenant mix.”

This is the second joint venture between Heidenberg Properties, Strategic Real Estate Partners, and Norse Realty Group. The first was the acquisition of the Hershey Square Shopping Center in Hummelstown, Pennsylvania in October 2014, which has since been expanded by over 11,000 square feet to 228,000 s/f.

Totaling 280,500 s/f, the property includes 100 and 200 Schultz, and 230 Half Mile Road. The current occupancy presented an opportunity with strong upside potential, according to Cushman & Wakefield’s Andrew Merin, who headed the transaction with David Bernhaut, Gary Gabriel, Brian Whitmer and Andrew MacDonald.

“Mack-Cali has been focusing its investment activity in certain geographic areas, and these buildings sit adjacent to another, highly successful asset in the firm’s regional portfolio,” Merin said.

“Mack-Cali plans to incorporate them as part of one cohesive campus with shared amenities, which will enhance the potential of this already great value-add play.”

This is the third property the Cushman & Wakefield team closed with American Equity Partners this year.

The three-story building is home to pharmaceutical, engineering and law firms, among others The nearly 15-acre grounds have a pond with a fountain, patio and abundant surface parking.