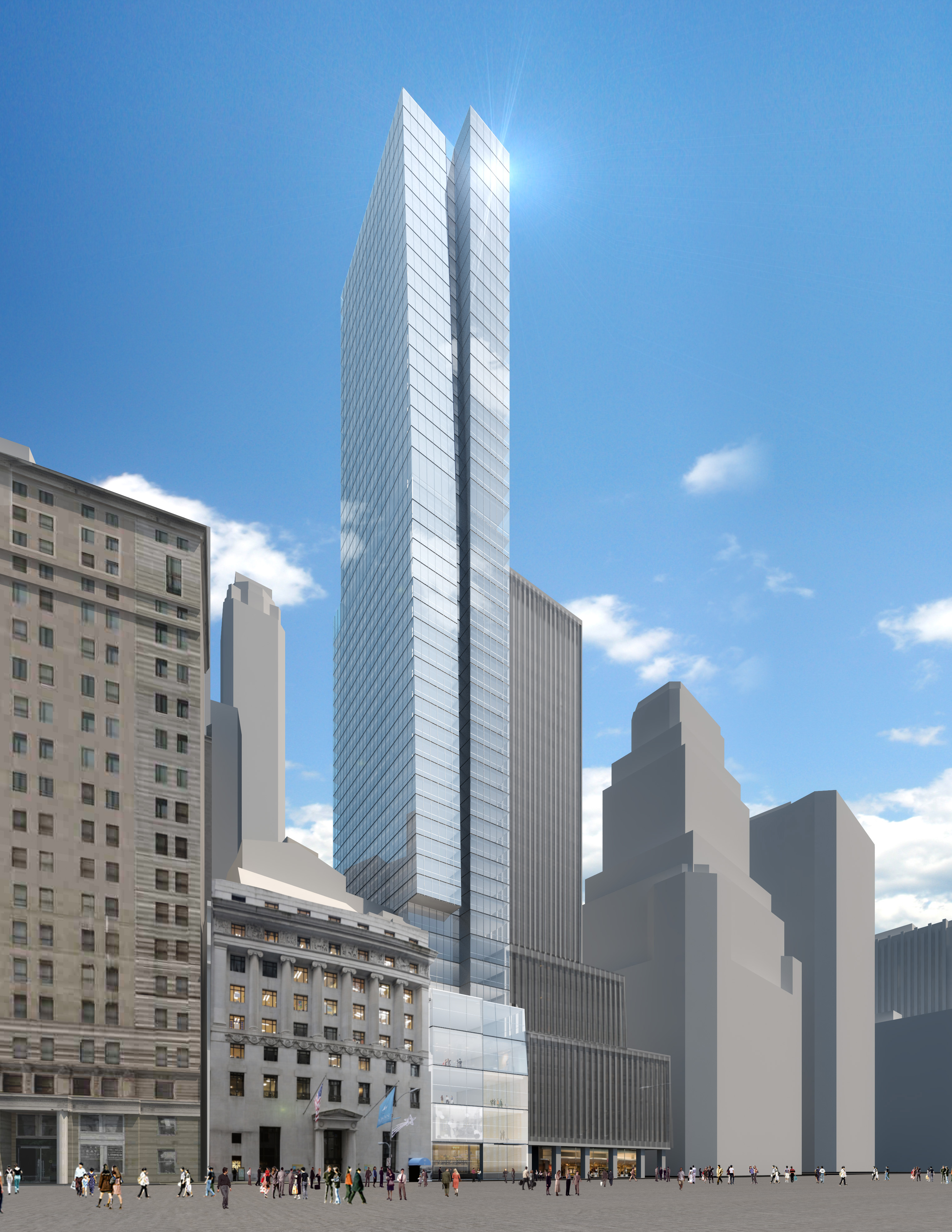 Cushman & Wakefield is marketing 45 Broad Street, a development site in the Financial District that offers 264,200 s/f of FAR for residential and/or commercial use.
The site could hold a super-luxury residential or mixed-use property. An investor has the opportunity to construct a new tower within the C5-5 Special Lower Manhattan zoning district, which has no specified height restriction.
Based on initial architectural studies, the site can support a 45- to 50-story tower.
A Cushman & Wakefield New York Capital Markets team of Nat Rockett, Helen Hwang, Jared Kelso, Karen Wiedenmann and Sujohn Sarkar are marketing the property.
“While it’s been talked about for quite some time, the Downtown story is just now taking off with respect to commercial demand and residential pricing,” said Rockett, executive vice president at Cushman & Wakefield.
“With the arrival of major employers to the World Trade Center, the addition of two spectacular transit hubs and one million square feet of new retail, the stage is set for a world-class residential, hotel or mixed-use project at 45 Broad.”
“Downtown is benefiting from $30 billion in public and private investment, and has become a globally-recognized leisure destination,” added Kelso, managing director of C&W Global Hospitality.
“The Downtown hospitality market is currently under-supplied and a flagship hotel within 45 Broad would accommodate the unmet needs of the high-end corporate and leisure traveler.”

Massey Knakal is marketing a major Hudson Yards development site that could hold the city’s tallest tower.
The Hudson Boulevard facing site at 435 Tenth Avenue, running block-through from 501-507 West 34th Street to 510-528 West 35th Street, is expected to fetch in excess of $200 million.
“In the years, ahead the Hudson Yards District is sure to be the most dynamic neighborhood in the city,” said Robert Knakal, Massey Knakal’s chairman, who is handling this assignment with partner James P. Nelson.
MJM+A Architects PLLC has determined the 37,026 s/f site could ultimately yield a building of 1,800 feet high soaring over 100 stories into the air.
With the purchase of DIB and ERY rights, this mixed-use site would yield over 1.2 million square feet. “The site would be suitable for retail, office/hotel, and residential. An observation deck would be the ultimate addition,” said Nelson. The High Line’s third and final phase is expected to open late this year. It will loop around Hudson Yards as it turns to the Hudson River at West 30th Street, culminating at Twelfth Avenue and West 34th Street.
The section of the High Line extending over Tenth Avenue at West 30th Street will have a bowl-shaped structure covered in greenery called, the Spur. The entrance to the newly extended 7 train will be one block away from this site.

Princeton International Properties Corp. has closed the acquisition of 90 Broad Street, New York.
The 420,000 s/f building was designed by Cross and Cross in 1930 and is located in lower Manhattan on a corner location with full block presence, between Stone and Bridge Streets.
The Beaux Arts lobby features a two-story, barrel-vaulted gold leaf ceiling with cornices and parapets.

“We are thrilled to add our first asset in the financial district to our portfolio of Manhattan office buildings,ˮ commented David Tawfik, president of Princeton International Properties.
“We believe in this sub-market and plan on repositioning the building by infusing $20 million to be allocated to hallways, restrooms and tenant improvements, including contemporary build outs and a built-to-suit program for the wide variety of tenancy attracted to the downtown market.”
A further $23 million in funding has been set aside for Sandy Restoration on the property.
This will include a complete overhaul of the building mechanical infrastructure which was badly damaged during the storm.
A new mezzanine will be constructed to house the new electrical equipment and ensure that in the event of another flood, the building mechanicals will be protected above the flood line.

Peter Von Der Ahe, Scott Edelstein and Seth Glasser, all in Marcus & Millichap’s Manhattan office, represented the seller.
Edelstein, Von Der Ahe and Glasser, along with Sean Beuche and Christopher Sjurset, the latter two also in the firm’s Manhattan office, advised the buyer.
“With floors two through five delivered vacant upon sale, the property gives the new owner many options, including occupying a portion of the building and leasing the remaining space in a live-plus-income scenario or converting the apartments on floors two through five into luxury rentals,” said Edelstein.

Kennedy Funding had previously provided a loan in that amount to the borrower, secured by 2,654 acres of land at Cedar Mountain, Iron County, Utah.
Located 10 miles from the Brian Head Ski Resort in Cedar City, Utah, the site’s initial phase was approved for residential development, including 145 five-acre lots, of which most have been sold and improved with homes.
Phase two was approved for 239 five-acre lots, followed by a 1,028-acre phase three zoned for 20-acre lots.
“When the borrower initially approached us, they needed a loan to move the project forward,” said Wolfer. “We are pleased to have been able to complete the note sale.

Imperium Capital, a New York City-based real estate investment and development firm, and Centurion Realty, a New York City-based investor, have acquired 643-657 Lincoln Road, in Miami’s Lincoln Road Mall.
The property was acquired for $33 million.
“We expect this to be the first of many prime properties that we will acquire in the Miami market in future years,” said Samuel Schneider, managing partner of Imperium Capital.

Lincoln Road is an 8-block long pedestrian walkway between Washington Avenue and Alton Road, filled with shops, restaurants, and cafes.
It was planned in the 1920s by the legendary Carl Fisher, one of the early developers of Miami Beach and today it is one of America’s most fashionable shopping streets.
In the past several years, Imperium Capital and Centurion Realty have partnered on prime Manhattan retail acquisitions, including the SoHo Apple Store building at 103 Prince Street, 120 Prince Street, and the retail condominium at 465 Broadway.
Jay Goldman of USA Commercial was the broker representing the sellers.