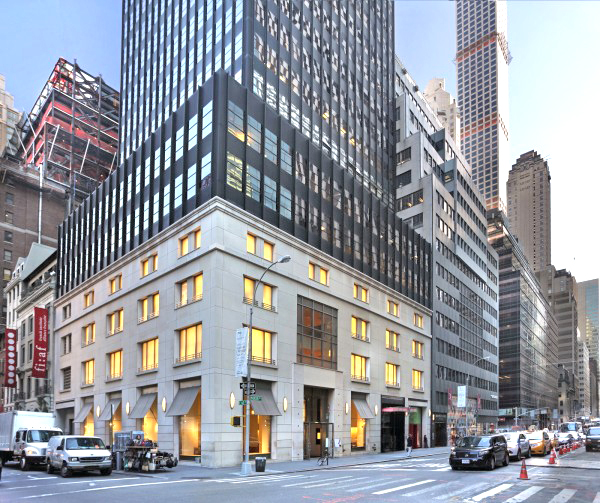 Hwang is no stranger to the property, having sold it to the current sellers for $210 million while a broker with Cushman & Wakefield in 2011.

“As the area becomes more saturated with luxury condo development, opportunities for those who want to rent and who value a fully-amenitized lifestyle will become even scarcer,” said Hwang, senior executive managing director and head of Meridian’s Institutional Investment Sales Team.

“88 Leonard Street features the modern architectural design, luxurious amenities and conveniences that when combined with its outstanding location, will consistently produce the type of demand that sustains value.”

Developed by Afrida Israel in 2007, 88 Leonard Street contains 352 residences and ground floor retail space, all of which is serviced by an attached parking garage.

The 21-story building is located within the most expensive zip code in Manhattan, and one of the most desirable neighborhoods in the city.

According to Meridian, since 2012, rents for market rate units at the building have improved nearly 20 percent, more than twice as fast as the average rent growth achieved throughout Manhattan.

Africa-Israel USA (AFI-USA) has closed on the sale of the retail condominium of the Times Square Building at 229 West 43rd Street for $296 million to Kushner Companies.

The retail portion comprises the first three floors and portions of the fourth floor, cellars and sub-cellars of the building with frontage on West 43rd and West 44th streets.

“We are proud to have transformed this immensely historic building by doubling the retail space and giving it new life in the already lively Times Square district,” said Chagit Sofiev-Leviev, CEO of AFI-USA.

“The change undergone here is amazing and we know that Kushner Companies has the vision to continue the success at this asset.”

The Times Square Building, located at 229 West 43rd Street, housed The New York Times when the property was built in 1913 until the building was sold in 2004.

A portfolio Flatbush retail properties could fecth as much as $63 million, according to brokers.

Cushman & Wakefield’s Bob Knakal is leading a team that includes Richard Velotta and Thomas A. Donovan in marketing the five retail and mixed-use buildings located along the major retail thoroughfare of Flatbush Avenue in Brooklyn.

An investor has the opportunity to control three major corners and an entire block within one of the major commercial thoroughfares in Brooklyn.

1555-1563 Flatbush Avenue and 744 East 31st Street is a one-story retail building located on a flag lot with 160 feet of retail frontage along Flatbush Avenue. Current tenants include Rite Aid, Subway and Foot Locker.

1556 Flatbush Avenue is one-story building adjacent to Brooklyn College. It totals 14,000 square feet with 17,460 s/f of development rights and is occupied by GameStop and Metro PCS.

1560 Flatbush Avenue is a three-story mixed-use building with 100 feet of retail frontage. It features two buildings on one tax lot totaling 7,800 s/f.

In addition to these five buildings in Brooklyn, a one-story retail building located at 58-08 Myrtle Avenue in Ridgewood, Queens is also available for sale. The building is NNN until 2024 to a retail clothing company.

The asking price for the portfolio is $63,000,000, however, the properties can be purchased individually

Holliday Fenoglio Fowler, L.P. represented Nightingale Properties in the purchase of a leasehold position of 645 Madison, a 22-story, 157,027 s/f Class A trophy office and retail tower in the Plaza District.

HFF arranged the capitalization on behalf of Nightingale and Friedland Properties.

According to The Real Deal, the partners paid $76 million to purchase the operating lease from TF Cornerstone.

Originally constructed in 1971, the property was fully renovated in 2007 and is primarily leased to financial services tenants. It also contains 36,170 s/f of retail, which is available for immediate occupancy.

“We are excited to have arranged this venture between Nightingale and Friedland and are confident they will transform the asset into a best-in-class office and retail property worthy of this famed corridor,” said Rizzi.

Kew a profit in Queens

It is the second time Jungreis sold the building. Six years ago, he sold it for $14.5 million.

“This was an off-market deal in a strong, upper middle class neighborhood,” said Jungreis, who has sold a total of 40 buildings totaling over $500,000 million in Queens this year. “Queens is almost as hot as Brooklyn.”

The six-story elevator building features 109 apartments, including two professional offices and 31 parking spaces. The 101,950 s/f property, a former condominium that went back to rental, was built in 1956. It sold for 14 times the rent roll and the cap rate was 4.25 percent.

TerraCRG has been tapped to sell a 20-unit multifamily building in Park Slope, Brooklyn.

310 12th Street between Fifth and Sixth Avenues contains one four-bedroom unit, six three-bedroom units and 13 one-bedroom units. The building, which has 14,644 s/f of space, has an asking price of $9.75 million.

“This building is particularly attractive because it’s a classic limestone building… It’s pretty rare to find a 20-unit building, with upside, on a prime street like 12th between Fifth and Sixth,” said Adam Hess, a partner at TerraCRG who is heading a four-person team marketing the property.

The 95-percent-leased Chester Springs Shopping Center is anchored by ShopRite, in addition to Marshalls and Staples.

The Manhattes Group announced the sale of a two building North Brooklyn package deal consisting of 347 Lorimer Street in Williamsburg, and 1381 Myrtle Avenue in Bushwick to Morgenstern Capital and Valyrian Capital.

347 Lorimer Street is a six story corner 25,777 s/f multifamily elevator building in the heart of Wililamsburg consisting of 18 apartments.

1381 Myrtle Avenue is a five story 33,600 SF mixed use elevator building in the heart of Bushwick consisting of 3 retail stores and 24 apartments.

The buyers acquired the assets for $28,150,000. Alan Shmaruk and Michael Sherman of the Soho-based Manhattes Group brokered the transaction.

the demand for these rapidly transforming Brooklyn neighborhoods,” said Shmaruk.

Morgenstern and Valyrian plan to continue operating the assets as rentals.

Quinlan stakes its claim on office market with Pioneer