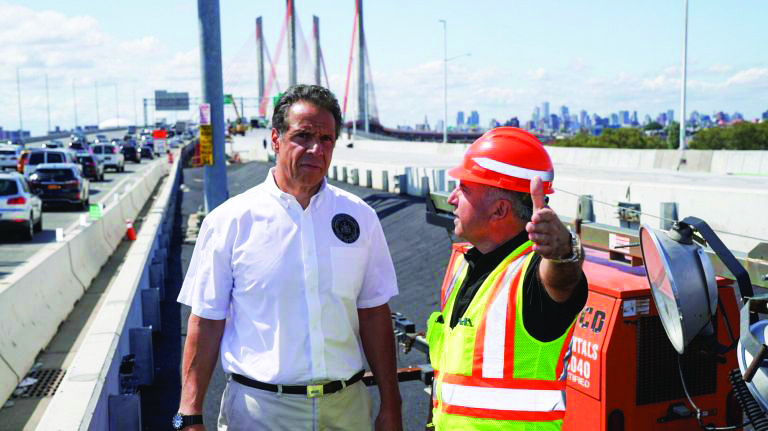 The Kosciuszko Bridge, which will be the first new major bridge crossing constructed in New York City since the Verrazzano Bridge in 1964 and is four years ahead of schedule and on budget, will be open to the public on Wednesday from noon to 6 p.m .for the community to bike or walk over the new bridge before it opens to traffic on early Thursday morning.

“While the federal administration obsesses over building walls, in New York we are building bridges and other infrastructure critical to moving our 21st century economy forward,” Governor Cuomo said.

“With the opening of the second span of the new Kosciuszko Bridge on Wednesday, we will once again demonstrate to the nation that it’s possible to take on big projects and to get them done on time and on budget.”

A design-build team led by Skanska and indlucing Ecco III of Yonkers; Kiewit of Nebraska; and HNTB of Kansas was contracted for the $555 million project, the largest single contract the New York State Department of Transportation (NYSDOT) has ever undertaken.

The bridge will replace the existing 77-year-old structure first opened in 1939 under President Roosevelt, with two new cable-stayed bridges, one Queens-bound and one Brooklyn-bound.

Shoulders have been added to both bridges, where none currently exist.

The roadway incline has also been lowered by approximately 35 feet, making it easier for trucks and other large vehicles to maintain consistent speeds on the bridge – helping reduce traffic congestion.

In April 2017, traffic was shifted onto the new Queens-bound bridge and the existing bridge was removed to complete Phase 1 of the project.