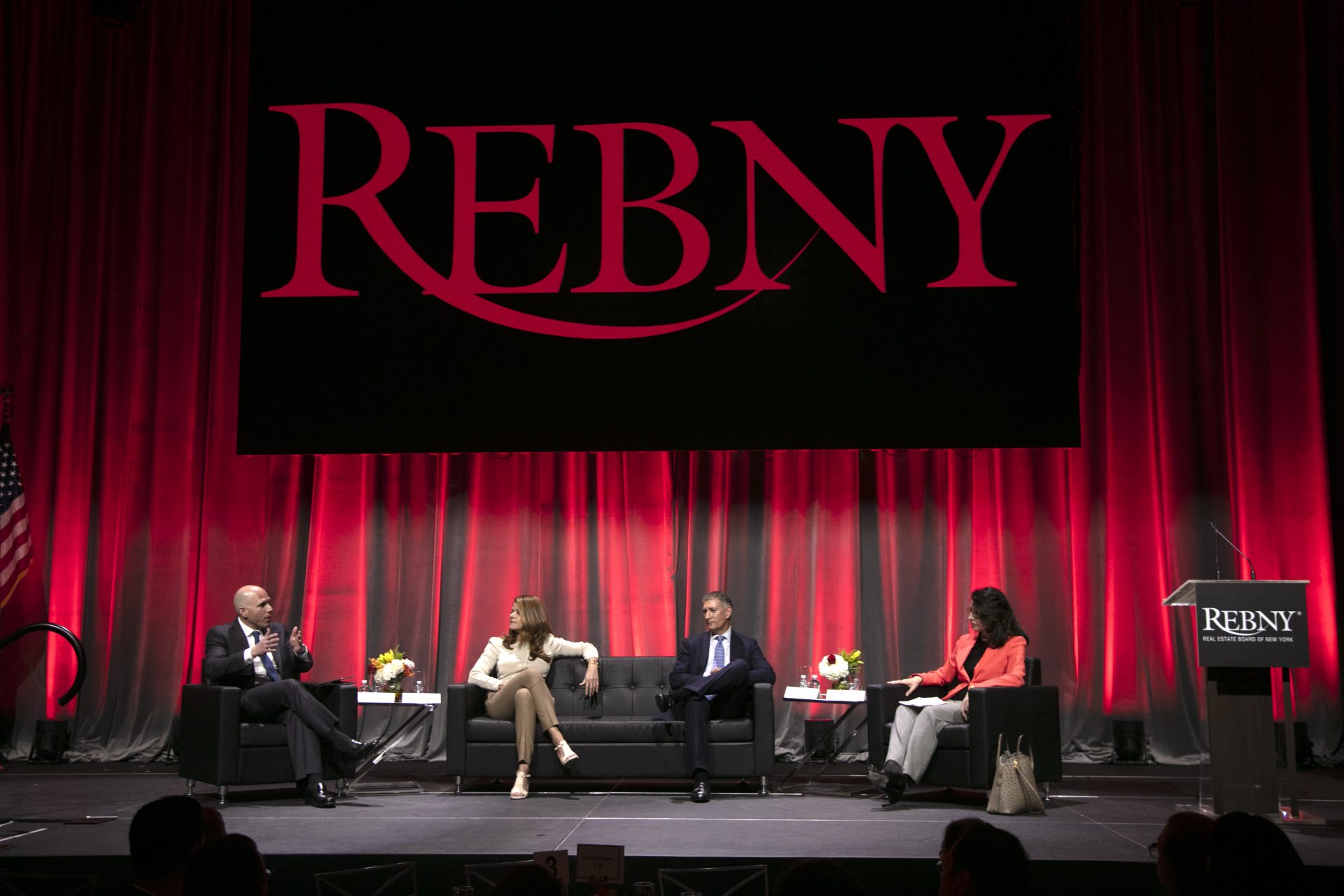 Everyone was thinking it; she just said it out loud.

After Scott Rechler, chairman and CEO of RXR Realty, delivered a stump-worthy spiel about affordable housing, transportation, leadership and the importance of voting, MaryAnne Gilmartin, his fellow panelist at REBNY’s annual fall luncheon, raised the question on everyone’s mind:

“You know, Scott, I know you thought this was a panel discussion where we all came to talk about real estate,” Gilmartin said, “but we’re all really hear to ask you when you’re going to announce a run for office?”

Raucous laughter cut the tension along with scattered applause and a sheepish grin from Rechler but no response. Gilmartin continued on a different line of thought and the event hit its scheduled stop moments later. The question hung in the air, though, as thick as the gravy on the 500 or so lunch plates inside the Ziegfeld Ballroom.

However, when reached after the event, Rechler cleared things up.

“No I do not have any plans to run for office,” he told Real Estate Weekly in an email. “As you know, I am a big believer that business leaders need to be a actively engaged in making our communities stronger. It is part of my and RXR’s DNA.”

Along with running a successful real estate business, Rechler sits on the MTA’s  Board of Directors, was vice chairman of the Port Authority and is a frequent political donor.

During Tuesday’s event, Rechler praised REBNY’s effort to mobilize its members to a City Council hearing the day before on a proposed commercial rent control bill. He said that type of organization is important to combat some of the more shortsighted viewpoints that are steering today’s political climate.

“Being a developer, you don’t know how many times we go in front of boards where the only people there are the vocal minority that doesn’t want the project to go forward for NIMBY reasons, not for the good of the whole,” he said. “The people that care and are most vested, usually don’t show up and … incumbent upon all of us to be responsible, to use our voice and not expect someone to do it for us, because it’s not going to happen. And that starts with voting.

“Think about how few people came out to vote in the last mayoral election,” he continued. “If we want to have good leaders who are thoughtful and are going to navigate all the challenges that we discussed up here today, it really starts with us being good leaders and going to vote on November 6 and getting everyone else to do that and being civically engaged across the board because that’s where it’s ultimately going to drive the change and the voices are going to be heard.”

Those remarks drew a round of applause from his fellow real estate professionals in attendance.

“It reminds me very much of the 90s and crime, where crime was turning people off and people were going to leave because of crime and if we don’t get a handle on that, that’s the risk.”

Rechler touted the importance of public-private partnerships and urged people to get out the vote. He said the need for improved transportation and more affordable housing was pushing the city toward a “tipping point” for companies and their prospective employee bases.

“It reminds me very much of the 90s and crime,” he said, “where crime was turning people off and people were going to leave because of crime and if we don’t get a handle on that, that’s the risk.”

The topics are familiar territory for the RXR boss, whose company specializes in Manhattan office space as well as transit-oriented residential products in inner-ring suburbs. However, in addition to his professional pursuits, Rechler has also spoken out in recent years about more politically-charged subjects, such as gun control.

Burger gave a narrower response to the question. He praised Rechler and Bill Rudin, the head of Rudin Management Co. and the chairman of the REBNY board of directors, for “getting the government off their butts” to repair the airports and improve them from “third-world” standards.

“They should be applauded for what they’ve done and how they’ve helped the city,” Burger said. “Now, we

have to focus on the subways and buses and we expect to make it a more livable city.”

Gilmartin, meanwhile, endorsed Rechler’s “infrastructure is the new crime” platform and said she’s experienced the difficulties of trying to work with the government first-hand, referring to her time with Forest City Ratner, during which she had to oversee the construction of a new subway entrance to service the Barclay Center and ended up getting saddled with more than $65 million in extra costs.

“The level of corrosion, deterioration and the need for repair is so seismic that you end up, if you touch it you own it,” she said. “So, $72 million later, it was harder to build that subway entrance that it was to build the billion-dollar Barclay Center.”