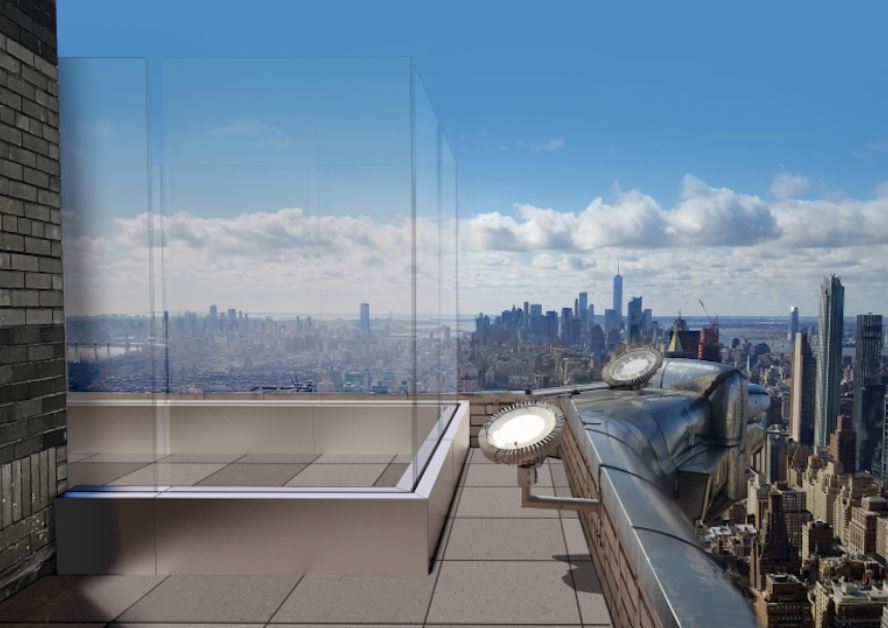 RFR Realty is looking to create an observation deck on the Chrysler Building as part of an ambitious plan to make the building profitable.

6sqft broke news yesterday (Wednesday) that the company, which bought the Art Deco landmark last year for $151 million, presented its proposal to a Landmarks Preservation Commission hearing on Tuesday.

Commissioners have reportedly voiced their unanimous support for the plans for the landmark, which had an observation deck on its 71st floor from its opening in 1930 until 1945.

RFR Realty wants to revamp the skyscraper’s 61st and 62nd floors to allow for public access.

Architects at Gensler have designed a plan that would create an eight ft. high, glass-fronted terrace on the north and south terraces of level 61 offering visitors views of the city from the platform of the building at 405 Lexington Avenue.

RFR, run by developer Aby Rosen, along with partner Sigma Holding GmbH, bought the Chrysler Building’s ground lease for $151 million from Tishman Speyer and an Abu Dhabi government fund last year. The structure of the deal has them paying the Cooper Union, which owns the property, $32.5 million a year in ground rent.

With the rent expected to increase to $67 million by 2029, RFR has been negotiating for new terms for the lease, according to multiple published reports.  Neither the school nor the developer responded to requests for comment.

RFR has been working to reconfigure the building’s retail footprint and Rosen has made no secret of his ambitions for the Chrysler Building, telling various media outlets at different times that he was considering a food court, a reinvention of the exclusive Cloud Club, which operated on the 66th to 68th floors until 1979 and “a new observation deck.”

In 1931 when the Chrysler Building opened, the observatory was called the “Celestial” and entry cost 50 cents. Admission to New York City’s newest observation deck, Edge at Hudson Yards, costs $36. According to its website, edge will reopen July 1.

How COVID-19 could be helping one residential firm grow

COVID-19 brings big changes to court and its combatants