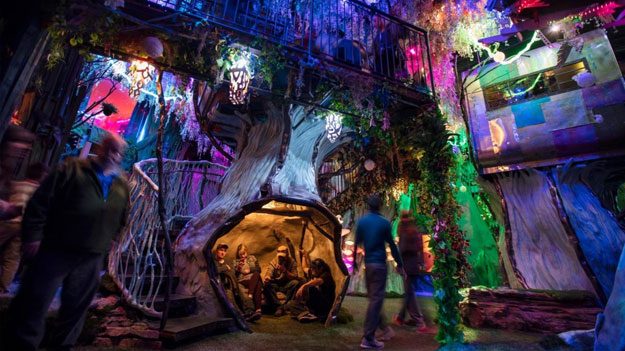 With the buzzword “experiential” still very much the undeniable trend in retail, planners at two major shopping hubs are advising others that the best way to get customers through the doors and back in again and again is by focusing more on art and interactive experiences that feel authentic as opposed to novel but superficial marketing gimmicks.

“It’s not enough to have Instagrammable moments. It’s over,” said Chris Wink, a director at the soon-to-open Area15, a shopping and entertainment center in Las Vegas. “Not that there’s anything wrong with the Museum of Ice Cream, but we have to think beyond that because I think it’s going to be running its course.”

He added, “It’s not just a cherry on a funny photo booth. It’s getting real artists, real entertainment to come in and create something soulful.” Wink was speaking at a panel called “Getting Retailtainment Right,” held at last week’s three-day ICSC New York Deal Making conference at the Javits Center.

While each of the other panelists cringed slightly when using the word “retailtainment,” they acknowledged that the concept isn’t a new one, but one that’s been tried, albeit unsuccessfully in the past.

“It’s not just a juggler in the food court,” said Wink. “That didn’t work.” Instead, he said entertainment and art need to be front and center. “People aren’t going to go out of their doors for retail and Instagrammable moments. They’re not going to drive somewhere for that.”

At the upscale Westfield, there are currently holiday pop-up shops, a concierge service, and noted Kyle, ongoing revolving art installations, which have been a big draw, especially when they encourage public participation.

Meanwhile, at Area15, an anchor tenant is Meow Wolf, a self-described “arts collective” that creates art installations, music productions and funhouse-type experiences like a mystery house it launched in 2016 with the support of “Game of Thrones” creator George R.R. Martin (pictured top). Area15 will also have revolving art installations alongside regular retail.

Asked about finding the right balance between arts/entertainment and retail, Kyle said it’s an evolving equation.

“The dynamic is changing. The environment is about carving out intentional space,” she said. “It’s respectful of retail and it’s actually benefitting retail.”

Kyle added that consistency is also important for customers while at the same time offering something new to keep them surprised.

One of Westfield’s most popular installations, she recalled, was an opportunity that allowed each visitor to paint a single spot, curated by an artist.

“It had to be the right kind of spot, but it was fascinating to watch it grow,” said Kyle. She added, “We try to stay away from anything people can’t get close to, that you would need 17 security guards for because it’s so valuable. Leave that to a museum. It’s nice, too, but keep it where people can participate. That’s the sweet spot.”