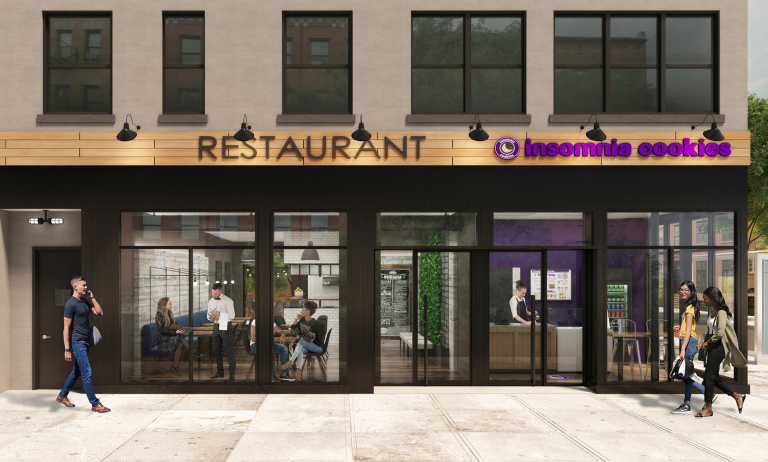 Magnolia Bakery, the international cupcake chain made famous in Sex & The City, has signed a 4,800 s/f lease at 250 West 54th Street in Midtown.
The lease for the partial 5th floor is for 10 years. Asking rent was $64 psf.
David Zar and Corey Miller represented the landlord, Zar Property NY, in-house.
The Magnolia store opened its first location in New York City in 1996 and became famous as a haunt of the fictitious Carey Bradshaw. Today it has 40 locations across the globe.
Since purchasing the property in 2017, Zar Properties has undertaken a renovation at 250 West 54th Street and welcomed eight other office tenants this year, including Motion P/T, a network of clinics offering physical, occupational, and speech therapy, and Tarisio Auctions, web-based auction house specializing in stringed instruments and bows.

Hidrock Properties announced that it has signed bakery chain Insomnia Cookies to its first Brooklyn store at 32 Fifth Avenue in Park Slope (pictured top).
Hidrock is finalizing its $3 million gut renovation of the three-story mixed-use building on the corner of Fifth Avenue and Dean Street, which includes a 500 s/f corner space and 1,100 s/f inline space. The bakery signed a 10-year lease for the corner.
“We’re thrilled to welcome Insomnia Cookies to our portfolio and excited to be a part of their Brooklyn expansion in this amazing part of the borough, ” said Hidrock principal Steven J. Hidary who, along with David R. Dayan represented the landlord.
SRS Real Estate Partners’ Jay Gilbert and Jansen Hafen represented the tenant.
Hidrock owns several building in Park Slope and will soon open a location for Ample Hills Creamery on Prospect Park West.

GrubbsTakeAway, a fast food burger chain with three stores in New Jersey, is set to open its first new York City location.
The chain signed a $1.5 million ten year lease for the retail space at 1453 York Avenue on the northwest corner of 77th Street in Lenoxhill.
GrubbsTakeAway is represented by exclusive broker Wayne Rose, of Rose Retail Realty Group, and plans to open six more stores in Manhattan in the next year before expanding into Queens and Brooklyn.
The landlord, 77 Realty Owner LLC was represented by Rafe Evans of Walker Malloy

James Beard Award-winning chefs Rita Sodi and Jody Williams signed a lease for an as-yet-unnamed American restaurant concept at 50 Commerce Street in the heart of the West Village.
The high-profile corner location, which is owned by Kingsman Management LLC, comprises 1,800 s/f of ground-floor space and a 1,500 s/f prep kitchen in the basement.
The space has been home to many popular and successful restaurants over the years, most recently, Commerce.
Winick Realty Group director Charles Rapuano brokered the deal alongside Matthew Schuss of Jones Lang LaSalle.
Sodi and Williams currently operate multiple restaurants in the West Village, including Via Carota and the recently-opened Bar Pisellino. Their latest venture at 50 Commerce Street is slated to open in Fall 2019.

Flushing is getting its first beer garden, at Tangram, the 1.2 million-square foot mixed used development.
Called The Beer Assembly, it will encompass 3,550 s/f and rotate its taps to showcase locally crafted beers, intentional cocktails and food.
The beer garden is operated by Todd Leong, the culinary entrepreneur known for his role in co-founding Lucky Rice and for realizing groundbreaking concepts such as Leaf Bar & Lounge cocktail bar at One Fulton Square, Flushing’s first craft cocktail destination.
The design is by BHDM and is built upon the organic industrial texture of the adjoined food hall,.
The 24,000 s/f food hall at Tangram is part of a 275,000 s/f retail offering of restaurants and high-fashion.
Regal Cinemas has also just announced that it is bringing a 7-screen movie theater to Tangram.

Westchester getting a new Smart city