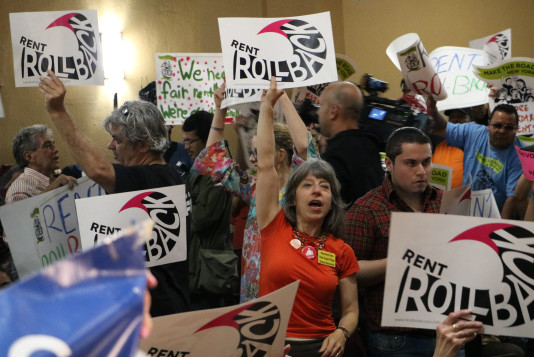 A “compromise” between tenants and landlords left neither side happy this week as the city’s Rent Guidelines Board ended a two year moratorium on rents.

The RGB voted on Tuesday to increase rents on the city’s one million-plus rent-stabilized apartments 1.25 percent for one-year leases and two percent for two-year leases.

“It’s not a good place to be in, but this was the best possible outcome,” said Harvey Epstein, one of two tenant members of the RGB, whose nine members are appointed by the Mayor.

Joseph Strasburg, president of the RSA, said in a statement, “Although a step in the right direction, these increases are totally inadequate for two reasons: They follow two consecutive years of unjustified rent freezes, and they fall far short of the RGB’s own data that the cost of operating a building rose by 6.2 percent in 2017.

“But we are hopeful that Mayor de Blasio is starting to realize that rent increases are necessary to preserving the city’s largest segment of existing affordable housing.”

Earlier, the two RGB tenant members –  Epstein and Sheila Garcia – told reporters they had wanted to propose a rent freeze but balked because they feared it couldn’t get voted through.

“If we hadn’t proposed [1.25 percent and two percent increases] tenants would have gotten a larger increase,” Epstein said. “[That proposal] saved hundreds of thousands of dollars for low income tenants and that’s our job.

“It’s our job to do the best we can and live with the political realities,” Epstein added. “We take this job seriously and today is the first day to move to a better system.”

The board ultimately passed the rent increase by a vote of 7-2, with the two landlord members rejecting the plan. They had previously put forward proposals to increase rents by up to six percent on two year leases.

Just ahead of Tuesday night’s vote, RGB  public members Hilary Botein and  David Reiss attempted to read a statement on the hardships tenants face and how stronger legislation could help rent-stabilized tenants. However, protestors at the hearing in Baruch College’s Mason Hall drowned her out.

The members’ statement focused mainly on state and municipal action that could ease the city’s housing crisis, such as affordable housing pegged to residents’ income and tackling so-called  “preferential rent” where landlords give new tenants low rents to draw them into a lease.

There were also calls for the state legislature to tighten oversight of Major Capital Improvements. “The state legislature should review how MCIs work in order to ensure that they are properly incentivizing landlords to invest in their buildings to the benefit of both owners and tenants,” said the public members’ statement.

LIC apartments getting smaller as more people move there