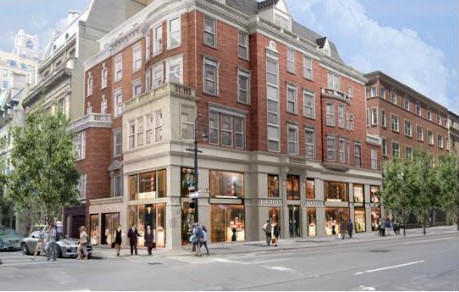 The Real Estate Board of New York (REBNY) presented top honors for the most creative and significant New York City retail deals of 2014 at the annual Retail Deal of the Year Awards.

The two most remarkable deals, selected from the array of 17 retail transactions submitted for the competition, were announced at the Retail Committee’s Deal of the Year Cocktail Party held at Club 101.

The Most Ingenious Retail Deal of the Year that demonstrates exceptional broker acumen was presented to Eric Le Goff, James S. Downey, Frank Liantonio and Michael Rotchford of Cushman & Wakefield, Inc. for 740 Madison Avenue, one of the largest transactions ever completed on Madison Avenue.

Over the six year journey, during the economic recovery of the world economy, the team skillfully and ingeniously navigated through numerous, unanticipated obstacles with resolute and innovative responses to negotiate this noteworthy transaction.

The Most Significant Retail Deal of the Year that recognizes the most significant retail deal in its overall characteristics and importance to the New York City retail market was awarded to Patrick A. Smith, Mark Kapnick, Corey Zolcinski and Matt J. Ogle of SRS Real Estate Partners-Northeast, LLC for “Redefining Bryant Park: The Creation of a New Retail District – 3 Bryant Park, 5 Bryant Park and 120 West 42nd Street.”

The team was hired by Equity Office Properties, an entity of The BlackStone Group, to lease approximately 160,000 s/f of retail space at 3 Bryant Park, 5 Bryant Park and 210 West 42nd Street, at the northwest corner of Bryant Park, which had previously been vacant and on the market for nearly four years.

Instead of viewing Bryant Park like other retail districts in Manhattan, which have been defined by a single, groundbreaking tenant, the SRS Real Estate team refocused the marketing strategy on co-tenancy and changing the market’s perception of the properties by hosting a successful industry event and showcasing public artwork in the retail spaces.

The team secured a diverse mixture of tenants to meet multiple customer needs for the area: for luxury retail, the team brought in luxury watch retailer Torneau; for daily needs, Whole Foods Market and Citibank; for lifestyle and fitness, Asics and Soul Cycle; and for restaurant and entertainment, Academia Brilla and Coffeemania.

The scale of this project and quality of the tenancy positioned Bryant Park as a seven-day-a-week, independent and substantial retail submarket.

“We congratulate this year’s winners, who accomplished enormous feats and navigated complex obstacles to attain results that required the utmost ingenuity and expertise,” said John Banks, REBNY President. “Their exceptional achievements put retailers and retail districts on the map; further shaping and adding to the vibrancy of New York City’s retail market.”

“The competition reached a new high this year and we were extremely impressed by all of the submissions received,” added Andrew Mandell, Managing Partner of Ripco Real Estate and chair of REBNY’s Retail Committee.

No relief in sight as rents soar