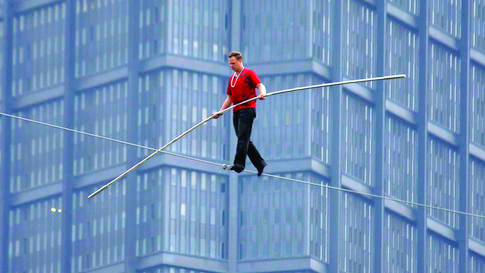 Property management can be a real high wire act

Were you holding your breath when Nik Wallenda walked the high wire over the Chicago river last weekend? So was Bill O’Leary, CPM, property manager of the Marina Towers Condominium Association.

“I was holding my breath for him, and for everything else,” said O’Leary, manager of the iconic Marina City, two 60-story towers the stuntman walked between with no safety gear or net.

The “everything else” began long before the record-breaking event appeared on television.The City of Chicago contacted O’Leary last winter to let him know that Wallenda was considering a high wire walk in Chicago, and that Marina City was one of the locations.

He and the condo board naturally had some concerns.“We have a residential property of 896 apartments, 1,400 people, what would be the disruption to the residents of the building, the wear and tear on the building, and them [the Wallenda team] taking over the roof of both towers?”

They didn’t have to worry about insurance liability coverage, however; it was taken care of by the other organizations.
An engineering firm was hired to ensure there was no damage to the building, inspecting both before and after the event, and consulting on all the wiring hookups to the exterior structure.

O’Leary made sure that residents were kept informed throughout the process, and that day-to-day operations of the building were not affected.
With 3,100 visitors to the building, 1,400 residents, plus an additional 200 crew members and technicians involved with the event broadcast, this caused some challenges.

“The night of the event we had two elevator technicians on site, in case anything happened with the elevators.”
Additional security was also required, with different teams in place to protect residents and guests, the TV crew, Wallenda, plus crowd control around the building.

Set-up for the event began the week before, on Sunday, October 26, with a helicopter air lift of equipment to the two Marina City roofs, and continued 24/7 until testing the evening of the event.

Because the two walks took place in the dark, special lighting was put into place. In addition, there were sky cams and fiber-optic connections between four buildings involved, with Marina Towers as the control center.

Media trailers extended more than a block down Dearborn Street and under Marina City for the entire week.
With an event of this magnitude, “like a Hollywood film,” O’Leary was impressed by the coordination of all the participants, which involved the City of Chicago (police and fire departments, special events, marine unit, crowd control), Homeland Security, the Coast Guard, the Wallenda team, NBC, Filmwerks, and the Discovery Channel.

Not to mention structural engineers, electricians, elevator operations, insurance coverages, and, of course, lots of attorneys. “What you learn from an event like this is how to co-ordinate different people with different functions.

Hundreds of people. To work as a team to make it happen successfully. And that’s what we did,” said O’Leary.
Would he do it again? Yes, in a heartbeat. “It was a lot more than I anticipated, but it was very exciting. We really wanted it to be successful, not only for Nik Wallenda, but for the City of Chicago and Marina City. And it was!”

Mindy Wallis is a senior eLearning developer at IREM.