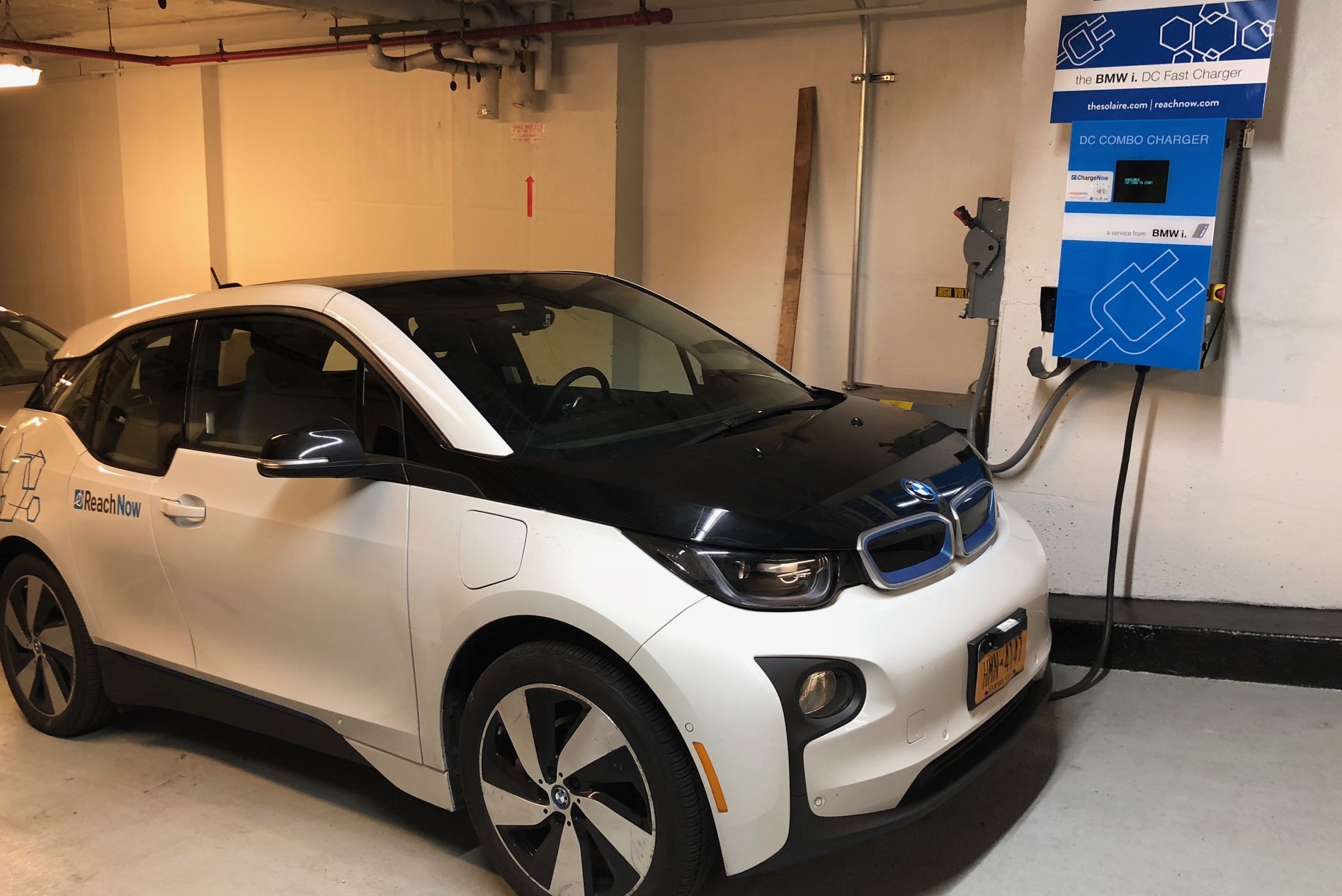 New York Auto Show visitors can see Hyundai’s newest small SUV this week at the Javits Center. It has LED headlights, 17-inch alloy wheels and it runs entirely on electricity.

Capable of driving 250 miles on a single charge, the 2019 Kona will soon be the newest battery-powered vehicle on the market,  but it won’t be the first. In fact, most major manufacturers have at least one plug-in electric model in their lineup while upstart brands such as Tesla have begun to specialize in them.

Though electric vehicles make up just a sliver of the cars on the road today, there are 4,700 registered in the city and the potential for many more as they become more practical and affordable, begging the question: how will all these batteries get charged and who’s going to pay for it?

In most of the country, the answer is straightforward: an EV owner parks the car in her garage, plugs it into the wall and picks up the tab on her utility bill. In New York, where drivers are lucky to find a parking spot within walking distance of their apartment, it’s not so simple. Factor in New York’s already-extensive energy needs and the prospects can be frightening.

Con-Edison has an idea to solve this conundrum and it’s willing to pay drivers and landlords to put it to the test.

“We want people who own a vehicle to own an EV and we want to make it affordable to charge, even if they live in a multifamily building,” Sherry Login, manager of Con-Ed’s electric vehicles programs, said.

Through its SmartCharge New York program, Con-Ed is encouraging EV owners to plug in during off-peak hours by paying them 10 cents per kilowatt hour charged between midnight and 8 a.m. and an extra $20 a month just for not charging between 2 p.m. and 6 p.m. in June through September, when the grid is pushed to its limits by cranked up air conditioners.

Drivers get $150 for enrolling in the program and they can get $25 for referring a friend. Some participants earned $500 during the first year of the program. Referral bonuses are also available to employers who get their employees signed up as well as car dealers who get their EV customers enrolled. Payouts are made through gift cards, pre-paid Visa cards or in the form of charitable donations.

Landlords and co-op boards interested in on-site charging but wary of the cost have shown a particular interest in the program, Login said. If residents are enrolled, building management can monitor all charging through an online portal.

The alternative is to opt for a time of use rate, which requires the installation of a separate meter, something that can cost several thousand dollars up front and still requires night charging to access lower rates.

“This is something that adds value to the building,” Login said. “Providing EV charging in a building adds value in terms of rent and the worth of a condo. It’s very difficult, in general, for people living in multifamily buildings to charge so if you have a building that is EV friendly, I think that would be an asset.”

The Albanese Organization has included EV chargers at its residential developments since 2003 when it installed its first station at the Solaire, a 293-unit rental building in Battery Park City. The company now offers an electric car-sharing program in partnership with BMW to tenants and owners in all seven of its multifamily building in Manhattan.

Michael Gubbins, a senior vice president at the Albanese Organization, said the access to charging stations and shared vehicles has drawn the interest of EV enthusiasts, including several Tesla owners.

“The resident response has been great and they really appreciate the option of utilizing electric vehicles and having the facility to charge them,” he said.

Albanese does not participate in SmartCharge New York, but Gubbins said the company has discussed the program with Con-Ed.

There are more than 8,144 electric vehicles—including both pure electric vehicles and those that also include a gas-powered range extender—registered within Con-Ed’s service territory. SmartCharge New York has received about 840 applications to date.

Participants are given a black box called a FleetCarma C2, which is plugged into the vehicle diagnostic port near the steering column. The box logs how much electricity goes into the car, how much goes out and it uses GPS to identify where the power comes from.

If it works as planned, a surge in EV use could be accommodated without having to alter the grid’s load capacity, Logins, the program architect , said. This could mean stabilized or even lower rates.

“If Con-Ed has to invest in the system, that’s what increases rates,” she said. “The idea is the system becomes more efficient because you can have the same pipes and wires but flow more kilowatt hours through them because you’re using the electricity when the demand is lowest.”

In addition to cost savings for drivers and ratepayers, the other objective of the SmartCharge is to mine data about electric car use.

Logins said the device doesn’t track where or how vehicles are driven, as do similar products made by insurance companies. The GPS feature is only used to identify when a vehicle uses the Con-Ed grid, she explained, allowing drivers to participate even if they don’t have a Con-Ed account in their name or even live in New York.

“If somebody lives in New Jersey, out on Long Island or in Connecticut and works in the city and charges in our services territory, they can participate in the program,” she said.

City Hall and Con-Ed will lay the groundwork for five EV fast charging hubs this year, one in each borough, with 20 charge points apiece, city spokeswoman Lauren Klein told Real Estate Weekly in an email.

It can take a full day to charge some vehicles using a standard voltage wall outlet and even modified “level two” chargers require a few hours of charge time. Direct-current fast charging can add close to 100 miles of range in half an hour.

Currently, there are 353 public charging stations in New York City—many of which are in parking garages—but only 10 DC fast chargers. Klein said the city is aiming to create 50 fast charging locations by 2020 and has committed to installing 100 multi-hour curbside charging points by early next year.

“The City is currently exploring all possible avenues to promote the use of cleaner vehicles,” Klein said.

City should learn from L.A.’s mistake on waste proposal