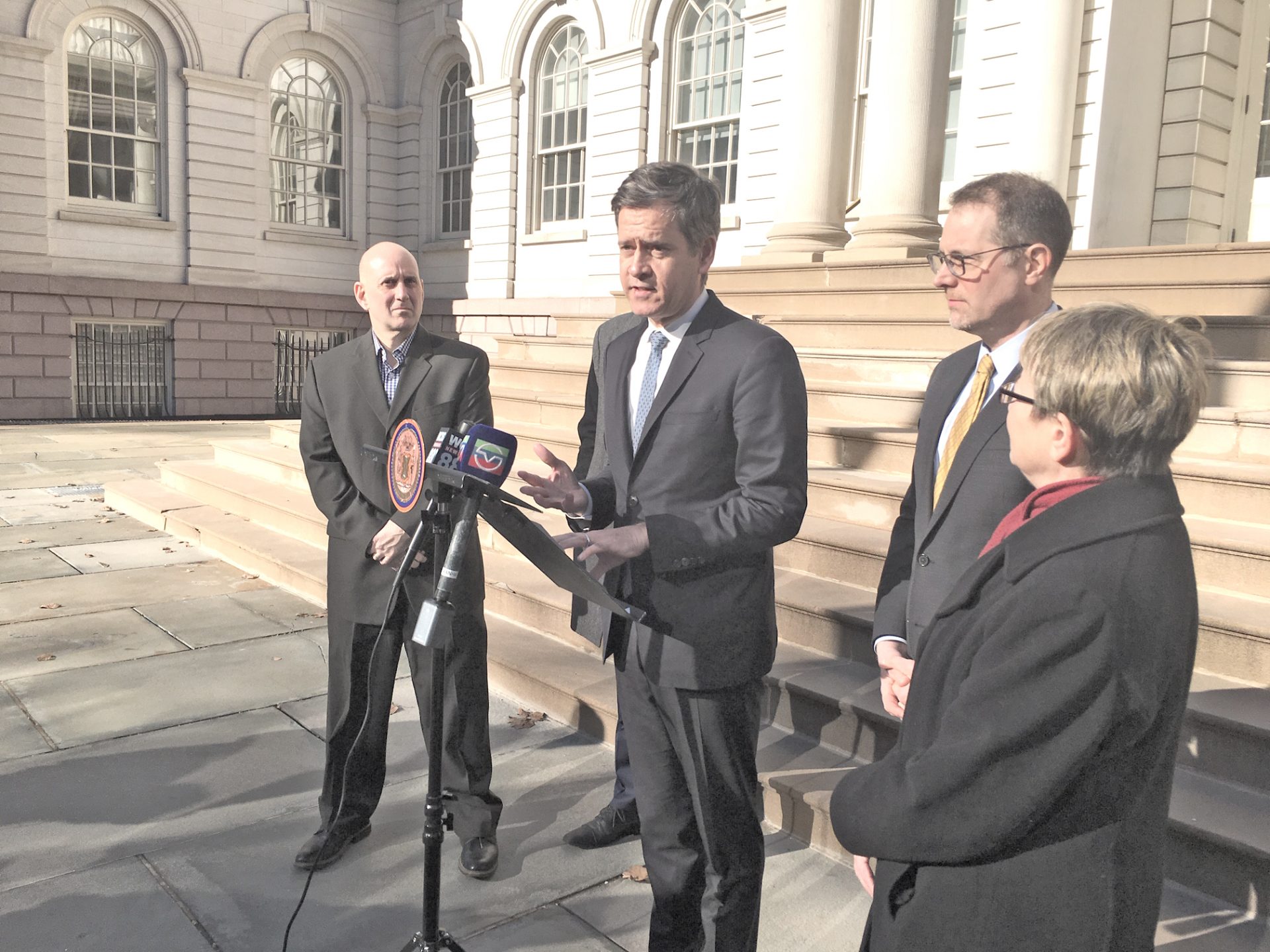 A few weeks after an out-of-state hedge fund billionaire bought a $238 million penthouse on Central Park South, two City Council members have introduced a resolution in support of a pied-à-terre tax.

Currently, in New York, non-residents are not subject to state or city income taxes and do not pay New York sales tax while outside the state.

The proposed tax, which would affect homes that cost over $5 million if they’re not the ownerʼs primary residence, isn’t new.

It was first introduced in 2014 by State Senator Brad Hoylman and Assembly Member Deborah Glick.

However, with Senate Democrats now in the majority in Albany, it has a better chance at getting passed this year than ever before.

The City Council resolution was essentially a show of support for the tax, made by Members Mark Levine and Margaret Chin.

At a press conference in front of City Hall on Monday, Levine and other Manhattan lawmakers argued that such real estate investments by out-of-state and foreign buyers are keeping buildings dark while the city gets done out of badly needed revenue.

“It’s a surcharge on property tax, so we can capture taxes from people who don’t really live here,” added Glick, who was also at City Hall.

“The real estate market has been dislocated by speculation,” she said, “and as a result average New Yorkers cannot find a place to live, but people with five or six houses across the country or world and have spent millions on an apartment are not contributing to the New York City tax base. This is a modest proposal.”

Hoylman told reporters he didn’t believe the tax would be a turnoff to buyers, because the range of costs are 0.5 to four percent. The percentage goes up depending on the price of the property.

If the tax went into effect, Hoylman said, it would generate $600 million in revenue annually. “That’s more money for the subway, for affordable housing.”

The senator noted that for Ken Griffin, Citadel CEO and the buyer of the pricey penthouse on Central Park, the tax would amount to $8.9 million a year.

However, the Real Estate Board of New York says the tax would hurt, rather than help the city. “New York City has one of the highest transaction tax costs in the country,” said John Banks, REBNY president. “An additional tax like the one proposed will suppress sales activity and lead to lower tax revenue for the city.”

The tax does have a supporter, however, in the Regional Plan Association, which recently published a report proposing property tax reform.

The RPA has blasted the Griffin purchase as “a bleak reminder of the wealthy who purchase expensive second-homes but live out of state, free from state or city income taxes, keeping housing stock off the market and contributing further to our housing crisis.”

According to the RPA, nearly 75,000 units in the city are unavailable due to “seasonal, recreational and occasional” use, the highest in New York City history. Meanwhile, the report has concluded that only 42 percent or 33,293 of the 74,945 units would need to be available for rent to end the rental housing crisis. The RPA is in support of a tax or surcharge on non-primary residences.

“People who use New York City as a place to stash their cash should pay taxes on it,” Hoylman said. “I like to call it an oligarch tax. Their dollars are kept preserved in America, in particular New York City.”

A representative for Hoylman said the next step for the bill would be for it to go through the State Senate’s Cities Committee, but there is no set date for this to happen.

City Council Member Keith Powers, who said his East Side district has more unoccupied units than any other, has also voiced support for the tax.

“These new buildings are lending themselves to displacement,” he said. “This is one way to encourage real housing.”