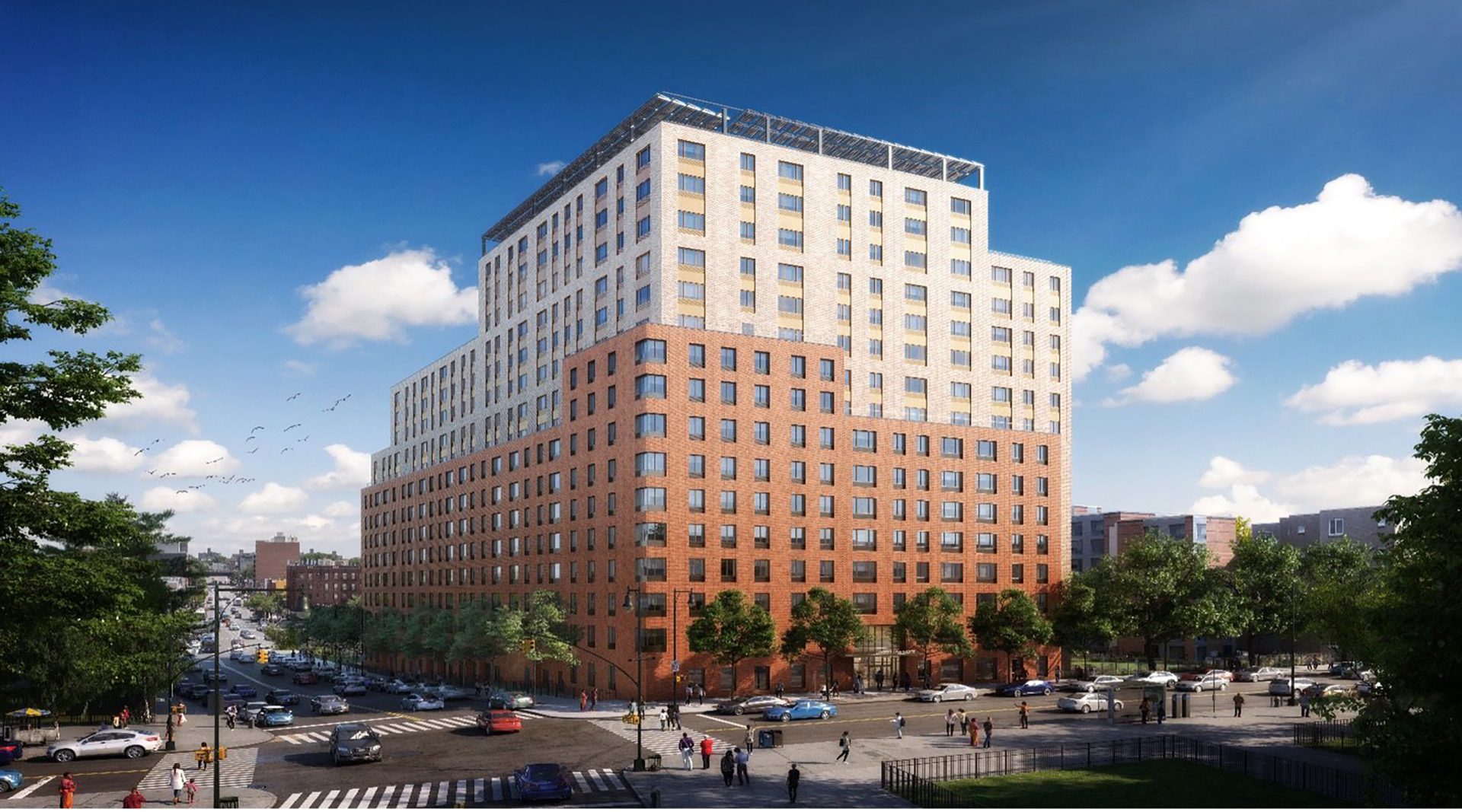 Phipps Houses, New York City’s oldest and largest nonprofit developer of affordable housing, has closed on $188 million in construction financing for the second phase of Lambert Houses, a landmark $600 million redevelopment project in the Bronx’s West Farms neighborhood. The ongoing project will entirely rebuild the outdated 1970s complex over roughly 15 years, eventually bringing its number of permanently affordable homes to approximately 1,665 — more than double its original number. All Lambert Houses tenants will be offered apartments in the new development. Phipps Houses opened the first phase, a 163-unit apartment building, to residents in August 2019.

The second phase comprises a 16-story building at 2080 Boston Road, with construction financing provided by the New York City Department of Housing Preservation and Development, the New York City Housing Development Corporation’s ELLA Program, along with Citi and the Urban Investment Group within Goldman Sachs Asset Management (“Goldman Sachs”). Designed by Dattner Architects, 2080 Boston Road will include 279 affordable units available for existing Lambert tenants with 42 units homeless households. Construction is expected to begin in January with an expected completion in mid-2024. Phipps Houses has relocated all residents of the now-demolished buildings at 2080 Boston Road in anticipation of the construction of the new building.

“The redevelopment of the Lambert Houses complex is a once in a lifetime opportunity to correct the flaws of the Urban Renewal Era and create better community connections and services for our residents,” said Adam Weinstein, President and CEO of Phipps Houses. “We hope this project will be a model for other large-scale housing providers to see that when you have available land, you can transform a development to a higher aspiration: to produce even more affordable housing and to better serve the residents of the complex.”

“The redevelopment of the Lambert Houses is a monumental project that aligns with my priorities of keeping The Bronx affordable for our current residents,” said Bronx Borough President Vanessa Gibson. “With the closing of the second phase of this project, including 279 affordable units for existing Lambert tenants and 42 units for recently homeless individuals, some of our most vulnerable Bronxites as well as our longtime residents will have a new and affordable place to call home, with state-of-the-art amenities. This project is a great addition to the West Farms section of The Bronx and I want to thank Phipps Houses, HPD and HDC who helped make it possible.”

“The redevelopment of Lambert Houses exemplifies the City’s commitment to both create and preserve quality affordable housing. Existing residents have the peace of mind that they can remain in an affordable home that is now safer, upgraded, and more energy efficient, while hundreds of additional opportunities open up for New Yorkers looking for an affordable home” said HPD Commissioner Louise Carroll. “I want to commend our partners at Phipps Houses for taking on this ambitious project to significantly improve conditions for existing residents and increase housing opportunities for low-income New Yorkers.”

“The expansive redevelopment of Lambert Houses will ultimately bring more than 1,600 permanently affordable homes, along with improved security features, a host of amenities, and community facility space to the Bronx,” said HDC President Eric Enderlin. “Congratulations to all our partners on the closing of the most recent phase of this ambitious effort which will help to revitalize the West Farms community, while ensuring our city remains affordable.”

“The Lambert Houses project is a great example of how the public and private sectors can collaborate with communities to drive transformational impact in their neighborhoods,” said Michael Lohr, Managing Director at Goldman Sachs Asset Management. “We are proud to partner with Phipps, HPD and HPC to increase the quantity and quality of affordable housing in the City and usher in a new era for the Lambert Houses and the West Farms neighborhood.”

“Citi Community Capital is excited to be a part of the team that is financing the second phase of the redevelopment of Lambert Houses, a unique opportunity to correct well meaning, but flawed projects built in an earlier era,” said Richard Gerwitz, Managing Director of Citi Community Capital. “Phipps Houses has put together a thoughtful redevelopment plan and assembled a financing and development team that will serve this community for years to come.”

The original Lambert Houses complex had a host of increasingly problematic issues, including outdated structural and mechanical systems, poorly designed open space within a superblock layout, and security issues created by a maze-like series of buildings, many interconnected by narrow hallways, with 14 separate addresses. Of the complex’s eventual 1,665 apartments, 728 will serve households that qualify for Section 8, including the current tenants of Lambert Houses. The remaining units will be affordable to households at different levels of Area Median Income. Phipps Houses’ new layout for Lambert was designed to re-integrate the buildings with the streetscape and neighborhood.

2080 Boston Road will offer a range of studios, one, two, three and four-bedroom units with a standalone garage and storage building. Tenants will have access to a landscaped courtyard with a children’s play yard, bike room, exercise room, laundry rooms and a lobby concierge. The new buildings will also feature updated mechanical systems and energy efficiency standards along with a dramatically improved security system.

Lambert Houses is adjacent to the Bronx Zoo and the West Farms Square-East Tremont Avenue 2/5 subway station. The Lambert Houses redevelopment plan was approved through the City’s Uniform Land Use Review Procedure in 2016.