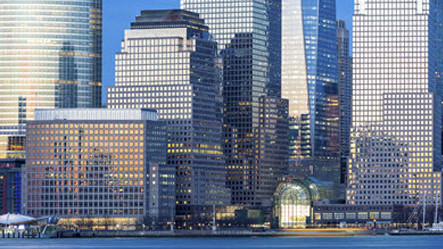 JLL has completed a new transaction for Syneos Health at 200 Vesey Street in Lower Manhattan.

The biopharmaceutical solutions organization signed a lease for 86,498 s/f inside a commercial office condominium within the Class A, 2.5 million-square-foot office building at Brookfield Place.

The team worked closely with Kevin Brandenburg, senior vice president and head of corporate services, at Syneos Health on the transaction.

The owner was represented by Lisa Kiell, Michael Shenot, Ed DiTolla and Andrew Coe, also with JLL.
“Syneos Health was looking for a large block of high-end office space in Manhattan that would allow the company to bring multiple parts of its business together under one roof,” said McNeil.

“The new flagship space supports the company’s cultural and business needs, providing two exclusive floors in a premiere building where employees can work together in a collaborative environment with state-of-the art technology and amenities. Employees and biopharmaceutical customers alike will also benefit from access to the Oculus, one of the world’s premiere transportation hubs.”

Syneos Health signed a 10-year lease for the space and will occupy the entire 39th and 40th floors at 200 Vesey Street, uniting operations from multiple locations in Manhattan.

Completed in 1986, the 53-story office tower has more than 2.1 million square feet of rentable area, including 300,000 s/f of luxury retail and dining.