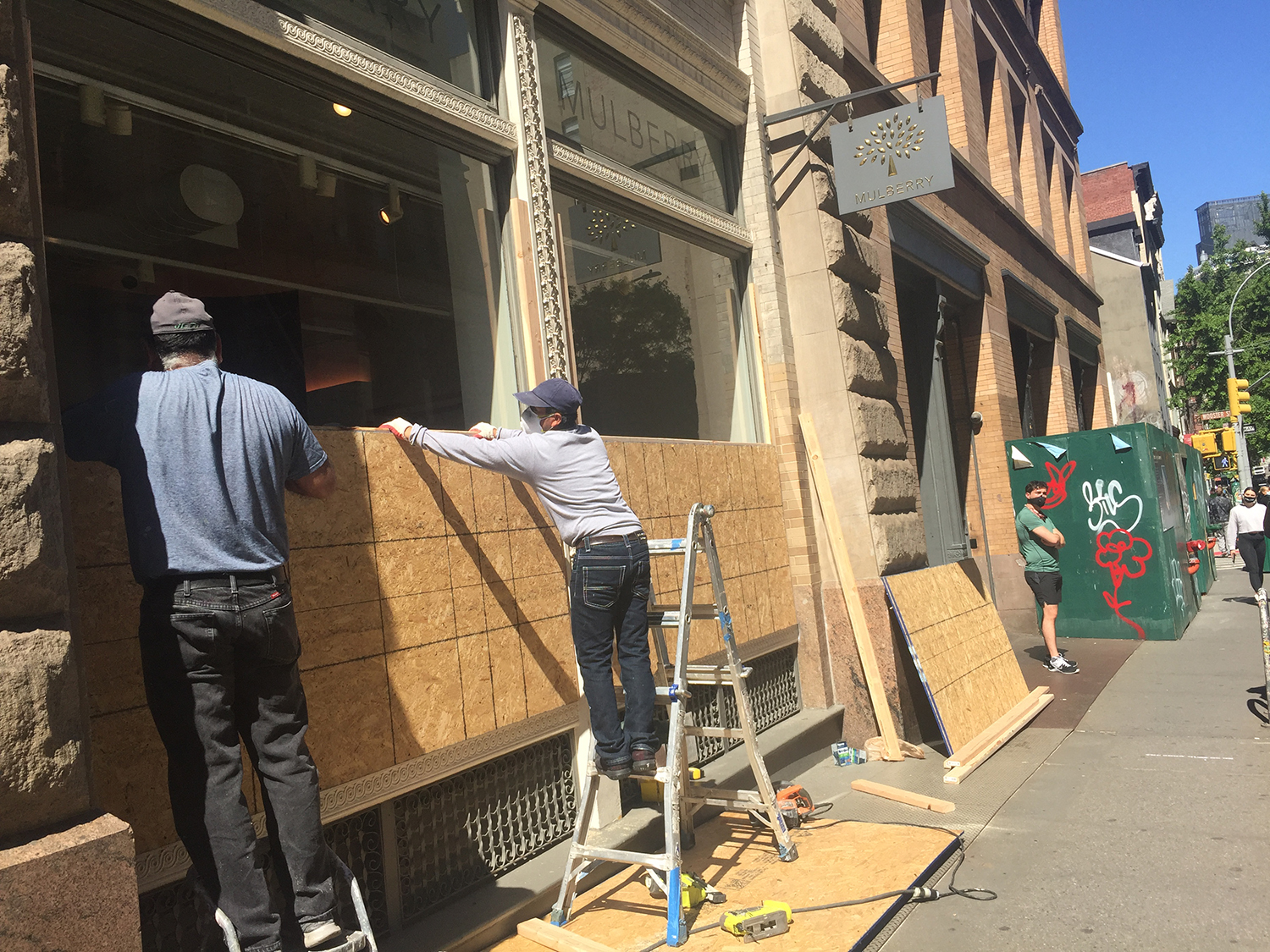 Manhattan property owners are being urged to secure their premises as the National Guard stands by to help quell protests that left a trail of devastation across the city over the weekend.

What began as largely peaceful demonstrations over the death of George Floyd on Friday night quickly escalated as some protestors turned their anger on property and police.

Entire blockfronts of Soho have been shut down after rioters smashed storefronts, looted and sprayed graffiti. “I can’t believe the devastation,” said one Soho resident. “There is glass everywhere, graffiti everywhere, garbage strewn across the streets. Unbelievable damage.

“Vans rolled up to the Apple store, Chanel, Coach … broke into the stores and piled up the goods into the van and drove away. “

Governor Andrew Cuomo said this morning that the National Guard was on standby as New York braces for another night of protests. 200 state troopers have also been deployed to help police who faced over 5,000 angry protesters rallying during a weekend of demonstrations that turned ugly. Around 345 arrests were made, 33 officers were injured and 47 NYPD vehicles damaged.

There have been no numbers released on how many protesters were injured.

In the Flatiron District, local BID workers have been helping clean up damage caused to 13 buildings and the local Flatiron 23rd Street Partnership has urged its members to take precautions.

“Although Flatiron/NoMad has not been the center of organized protests in Manhattan, that could change given our central gathering spaces and proximity to other congregating spaces like Union Square,” said the Partnership in an email. “Nevertheless, the damage inflicted on local properties and businesses last night means everyone should be prepared.”

The Partnership has advised store owners to remove merchandise from storefronts and install physical barriers on ground floor to prevent break-ins. It said building owners should leave lights on overnight on the ground floor and check security systems and the security of entrances.

Residents have been urged not to buzz strangers into their buildings and managers asked to placed garbage out out in the morning for collection during the day rather than on sidewalk overnight as it poses a potential fire risk.

Governor Cuomo – who is considering a possible curfew to keep protestors off the streets – has called on New Yorkers to use the same determination that helped fight coronavirus to save the city once again.

“Who changed society to deal with this virus? The people did it,” said the Governor at a press briefing today (Monday). “Fifty days ago, on April 12, we lost 800 people from COVID. Yesterday, we lost 56. Sixty days ago we had 3,400 people come into our hospitals. Yesterday, we had 191. Who did that? Who made that remarkable change, that radical change? Who made all that progress? Government leaders? Government did it? No, let’s be honest, most government leaders denied that COVID was a problem.

“It wasn’t government. It was we the people. We the people forced that change and did it in weeks, literally. So, of course we can change.

“We need to mobilize the best in our people rather than allowing the worst. But don’t lose the passion. Don’t lose the outrage. Be frustrated. But be smart and be directed and be constructive and destructive. Help your community, don’t hurt your community. Be a laser and focus on real positive change.

“That’s how this moment becomes a different moment in the history books. That’s how George Floyd’s death does not become just another name in a long list of people who should have never died in the first place.”

“This is a tremendous setback for everyone trying to deal with COVID. Having inventory stolen and property damaged certainly hasn’t helped the situation,” said Abramson, who is co-chair of the Union Square Partnership.

“Union Square has always been associated with protests and the murder of George Floyd is inexcusable,” said the veteran broker noting multiple banks, pharmacies and stores had been attacked. “But this isn’t protest. The people doing this damage are a separate group coming from outside the community who just want to cause damage.”

In a statement the Union Square Partnership said, “We are all deeply troubled by the disturbing cascade of events recently, starting with the grievous death of George Floyd and then the resulting in protests across the nation against police violence, entrenched racism, and the inequitable burden placed on minority communities during the pandemic.

“As one of the primary places people think to congregate for the expression of free speech, our Union Square neighborhood has become a focal point, and the Partnership continues to focus on its core service – to coordinate with agency partners like the Parks and Sanitation Departments to respond to sanitation and quality-of-life conditions within the district as quickly as possible. And over the next weeks and months, we will look for ways to see how the Partnership can play a constructive role in healing and building NYC.”