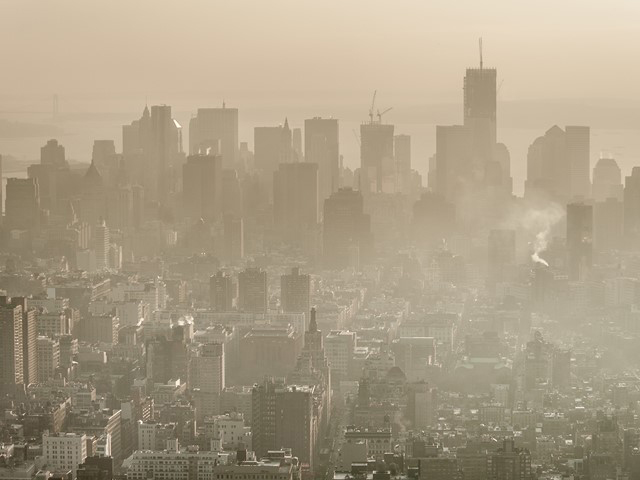 The city’s new carbon emissions laws are set to cost the real estate industry some $20 billion over the next decade.

And as a retrofitting program that is estimated to be the biggest in the world gets underway, owners are being urged to think ahead to avoid running out of time and help.

“We need the market to function rationally,” said John Mandyck, CEO of the Urban Green Council. “The market is prepared, in my opinion, but we need them to be early adopters.

“For the majority of buildings we have 10 years to plan for this, which is a luxury in compliance.”

Mandyck spoke to a crowd of architects, engineers and building managers during an event hosted by Spacesmith as part of Climate Week in New York City.

He explained how the non-profit Urban Green Council has been trying to educate the real estate industry on what the recently passed Carbon Emissions law means for them and their buildings.
He said the estimated total cost to owners retrofitting their buildings over the next decade will be about $20 billion as the market expands to 13 times the size it is today.

Local Law 97, enacted in May, will impact 50,000 buildings, 59 percent of them residential, 41 percent commercial.

The Urban Green Council, which researched the issue for two years prior to the law’s signing, also helped draft it.

While the law will mostly be rolled out over a ten-year period, Mandyck said landlords should start planning now in order to ensure their buildings are compliant and avoid potentially millions of dollars in fines.

Another potential problem, said Mandyck, is a dearth of industry professionals — architects, engineers, consultants and labor — to meet the demand later on.

Though initially described as a ban on glass buildings, in reality the law will affect buildings bigger than 25,000 s/f by limiting emissions per square foot.

The first deadline is 2024 for 20 percent of the impacted buildings that are considered the worst offenders. The next deadline requiring 40 percent of citywide emissions reduced will be in 2030.

While no property is exempt from Local Law 97, buildings that are city-owned or have affordable housing have separate requirements than the others.

Other specific requirements include insulating all pipes for heating/hot water, upgrading lighting to comply with the energy code, weatherization, and installing radiant barriers behind all radiators. City-owned buildings have to meet a 40 percent reduction by 2025, 50 percent by 2030.

The legislation also calls for the creation of a new office on energy and emissions within the Department of Buildings.

According to Mandyck this type of financing is important for two reasons. Firstly, because if the money is paid as part of an owner’s property taxes, it would be considered a higher securitized risk, allowing an owner to get a better interest rate from lenders. Secondly, if an owner sells a building, the obligation would just be passed on to the next owner.

Another thing that could be helpful to property owners, if the city enacts it, is what has been referred to as carbon trading. How that could work is that if an owner goes above and beyond the city’s requirements at one or more buildings, the owner could trade credits with other buildings that might never be able to comply with the emissions cap. Trading could be done within an owner’s portfolio of buildings or credits could be sold to another owner.

The city is currently considering this concept, and has committed to doing a feasibility study by January 31, 2021, including a plan on how trading could work. Carbon cap trading has been piloted in Tokyo, but on a much smaller scale. The initiative, which covers 1,000 buildings, also allows landlords other options aimed at reducing emissions.

While it’s believed that many buildings will require extensive retrofits, there are other options aimed at becoming compliant.

One alternative could be simply lowering energy use. Another is switching fuels, like going from oil to gas or gas to electric. Another would be buying renewable energy from a source such as a wind farm.

However, Mandyck said it’s unclear if there would be enough supply to meet an upcoming rush of demand. Another option, if the city implements it, would be the trading of carbon credits.

The law also allows for a deduction of up to 10 percent of a building’s annual limit for greenhouse gas offsets by doing things such as tree planting or carbon capture. However, the details on how this would work have yet to be established.

Finally, owners could simply pay the fines, which are $268 per ton over cap. But this isn’t likely to be sustainable to the affected owners.

“I’ve met with owners whose fines would come to $2-3 million a year, for the biggest buildings,” said Mandyck.

Ironically, some buildings designed with efficiency in mind could be the ones in need of the most work, just because of their size or how much they’re utilized.

“It’s where reality meets density,” said Mandyck. “You can have a very environmentally designed, green building, but the standards are design standards. You can go the whole nine yards, but if you have a lot of people in that building with data centers and trading floors, and it’s operating 24/7, it’s going to use a lot of energy. The carbon bill penalizes density, so we’re going to have to find a way to address that going forward.”


Building Owner and Managers Association of Greater New York (BOMA) is already lobbying for some changes to the new law.

In a letter sent to the city’s Green Buildings and Energy Efficiency’s Deputy Director John Lee earlier this month, BOMA chair and CEO Hani J. Salama, said there were a number of “unresolved issues” during the legislation’s quick journey to reality.

Among other requests, BOMA is hoping for a better way to account for things such as a building’s operating hours and density; setting distinct limits for high-energy use spaces such as data centers, trading floors and hedge funds; and opportunities to invest in low-cost, high emission reduction projects, such as NYCHA housing that could factor into the owner’s emission’s reductions. BOMA is also hoping for lower fines and for more buildings to be included in the effort so the responsibilities of owners are more spread out.

In response, Mark Chambers, director of the Mayor’s Office of Sustainability, said, “We are reviewing BOMA’s letter and will continue to work with stakeholders as Local Law 97 is implemented. Climate change is a crisis that demands bold and urgent action, and we cannot backslide on the progress that has been made. We have set aggressive but achievable targets while giving building owners maximum flexibility to reduce their emissions.”

Meanwhile, professionals in architecture and engineering are already working on beefing up their skills for getting a city’s worth of real estate ready.

Like Mandyck, Roger Marquis, business development manager at architectural firm Spacesmith, said he hopes there will be more outreach by the city on the law, so there won’t be a bottleneck of demand for building retrofits at the eleventh hour.

“These owners need to understand there are time deadlines and penalties involved,” said Marquis. Additionally, he noted, many building owners might be surprised to discover their buildings aren’t as compliant as they thought.

“It could be an old building or it could be a new building that’s all glass and sleek but for some reason the windows leak,” he said.

One problem Marquis has seen is where owners attempt to green a building without the crucial first step getting an energy audit from a consultant. “If no one does an upfront analysis — like do you really need a third conference room — If you did an analysis you’d find it’s only used three percent of the time. The same holds true with trying to green a building and working to comply with the new law.  You need to do an upfront analysis and follow through.”


Charles Copeland, president and CEO of engineering firm Goldman Copeland, said the new law has shifted the conversation on energy efficiency to performance and result-driven goals and has engaged a wide range of stakeholders not previously tuned into the issue.

However, he warned, “Without addressing oversights in the law that ignore occupant density, reduced carbon impact of off-hours consumption, and benefits of technologies such as combined heat and power plants and battery storage, the law could turn off some who believed they were already pro-actively addressing climate change in this market.”

AROUND TOWN; Events you need to know about this week