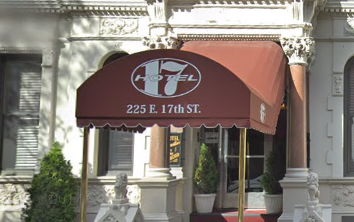 Hotel 17, the Stuyvesant Square budget hotel that closed in April due to zoning issues, has recently reinvented itself as an extended stay hotel.

The 160-room hotel, which is located at 225 East 17th Street, notes on its website in several places that it’s now “extended stay,” meaning guests must book a room for 30 days or longer.

Doing this keeps the building, which was never actually zoned as a hotel, in compliance with the city’s Illegal Hotels Law.

The law forbids buildings that are zoned as residential from renting units for under 30 days. Hotel 17 operated openly as a hotel for decades but a few years ago found itself in trouble with the city upon a crackdown on short-term rentals.

Eyal Siri, the manager of the hotel, said in April that he and his family were still hoping to keep the venue open as a hotel although they had already shelled out about $50,000 in fines to the city.

The owner had applied for a zoning variance to be officially converted to a lodging house but was denied since the area is zoned for residential use.

At that time, Hotel 17 was no longer taking reservations and the only people in the building were five permanent residents.

But the extended stay policy has now been in effect a couple of months, according to an employee, who added that six months is the maximum stay.

Fortunately, for some guests who’ve been using the hotel lately, this hasn’t been a problem. Along with tourists, people in need of emergency housing, like those who’ve had to move due to a fire, have been getting placed there by the Department of Housing Preservation and Development (HPD).

In situations like that, the city pays for the stay. This is for a room, and access to four shared bathrooms on each floor, though the building does not have a kitchen. An employee said that it is mostly single people and couples staying there and there are still vacancies. Starting rent is $1,500 a month for a single occupant.

“Although a challenging situation, Hotel 17 is back as an extended stay hotel,” Siri said, via email. “We are working with HPD for the past several months to assist those that unfortunately are displaced from their homes due to fire, flood, etc. These clients are good hard-working people from all over the tri-state area. Social workers regularly visit and interview clients. They monitor their progress as they actively work and in search of getting their lives back together. We go through great length to ensure the safety and comfort of all our tenants, and neighbors. We do not tolerate anyone that will disrupt the good and comfortable lifestyle people deserve to have. Hotel 17 extended stay is a work-in-progress as we continue to build on renting out the rooms. We offer six-months leases to those who apply and are accepted.”

HPD spokesperson Matthew Creegan confirmed the agency does move displaced people at various sites throughout the city, though for privacy reasons wouldn’t say if Hotel 17 was one of them. Creegan added that the most common reasons for emergency housing are fires and vacate orders from buildings.

The way it works is that for the first two days, the displaced individual would stay at a hotel, arranged by the Red Cross. After that, once the HPD verifies that the person is displaced because their home is unsafe, other lodgings are arranged, either at a single room occupancy building or a larger venue appropriate for families.