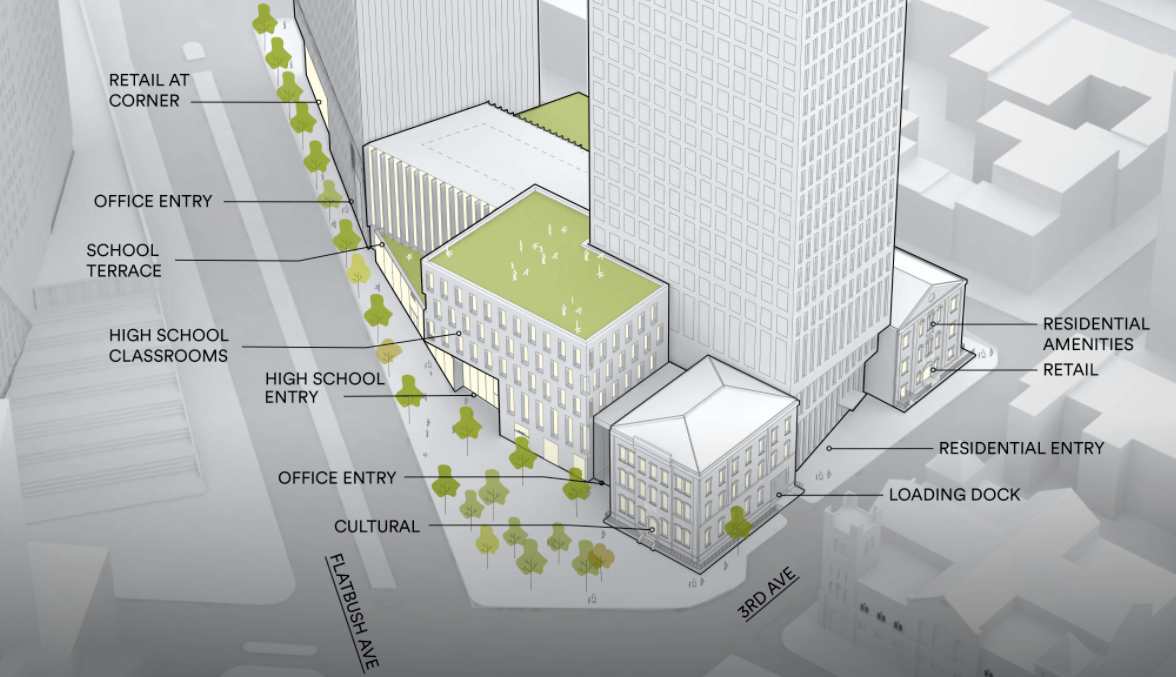 There’s a smart and responsible plan for transit-oriented development in Downtown Brooklyn. It’s a project that other neighborhoods across New York City should be aware of – because it is a blueprint for future growth of the five boroughs. That is why the Real Estate Board of New York is so supportive of the proposed development at 80 Flatbush.

Led by Alloy Development, 80 Flatbush will deliver a number of important public benefits in Downtown Brooklyn. The sensible proposal will close several critical gaps in the surrounding neighborhood.

First, it will be an injection of housing into a city that desperately needs it. Of the 900 new apartments that will be created, 200 will be permanently affordable. This means that 200 families who would otherwise not be able to afford a place to live in this area, will now have access to one of the city’s most sought after neighborhoods.

Second, it will meet the need for additional Class A office space in Downtown Brooklyn, which has the lowest commercial office vacancy rate – around three percent – of any central business district in the city.

The proposal would also, in partnership with the city’s Educational Construction Fund, create two new public schools, including a new facility for the Khalil Gibran International Academy, the city’s first public high school to specialize in Arabic language and studies and one of only seven international baccalaureate programs in the city. These state of the art schools will provide tremendous value to the neighborhood and beyond.
Finally, the project would expand and enhance the thriving Brooklyn Cultural District through the addition of new cultural space.

In addition to all the construction jobs and considerable economic activity that would be generated by 80 Flatbush, the project offers something for just about everyone. The creation of new educational opportunities for Brooklyn’s youth, affordable housing for Brooklyn’s families, free cultural space for Brooklyn’s artists and additional jobs for Brooklyn’s workers.

The proposal passed the City Planning Commission unanimously, but shortsighted community opposition could thwart the project. Driven by typical NIMBY concerns, some feel the project is “out of scale” with the neighborhood.

But the reality is that the housing crisis will be exacerbated if this project is restricted. Thanks to the City’s Mandatory Inclusionary Housing policy there is a unique opportunity to create a more diverse community in one of Brooklyn’s wealthiest neighborhoods. Downtown Brooklyn is already an expensive neighborhood – its average rent is $3,000 per month and median home price is nearly $2 million – and incomes are already far above city average. Adding more affordable housing units into the community will reduce pressure on long-time residents.

Moreover, Downtown Brooklyn is an appropriate location to build more housing – not less. Home to a major transit hub with access to a dozen subway and LIRR lines, this is an opportunity for new transit-oriented development. Sound urban planning encourages density around mass transit, and this is exactly the type of project that the city should encourage.

The 80 Flatbush project will foster smart growth while creating good jobs, schools, arts resources, and more housing to meet the needs of our growing population.

The reality is that Downtown Brooklyn would benefit from the construction of 80 Flatbush and New York City should encourage more projects like it across the five boroughs.

In Other REBNY News:
Waterfront developers from Manhattan, Queens, and Brooklyn will discuss their recent projects and their impact on the greater markets at REBNY’s Commercial Crossfire, “Brooklyn, Queens, Manhattan: 3 Unique Views of the East River Waterfront,” to be held on Wednesday, September 5 from 8:30 to 10:00 a.m. at One Seaport Plaza.

The discussion will follow the current trends and challenges in waterfront development, while each developer weighs in on what their future vision for the waterfront looks like. Price: free for REBNY members; $20 for non-members. Register online now: go.rebny.com/WaterfrontDev.

All submissions must be delivered to REBNY’s offices by Friday, September 14 at 5:00 p.m. Late submissions will not be considered. All awards will be presented at the 30th Annual Residential Brokerage Deal of the Year Charity and Awards Gala on Tuesday, October 30 at the Plaza Hotel. Buy your tickets now. Email ResidentialBrokerage@rebny.com to purchase a table of 10 at a discounted rate and/or to learn about gala sponsorship opportunities. Event proceeds support the REBNY Member in Need Fund, which provides grants to residential agents who have experienced unexpected illness or financial hardship.

Make it count this summer and join REBNY in collaborating with the Coalition for the Homeless, the nation’s largest advocacy and direct service organization helping homeless men, women, and children.

Join the ranks of dedicated REBNY members who advertise in the REBNY Manual. There is still time to showcase your brand in the 123rd edition, which will be published in January 2019.

As an added bonus, all advertisers’ websites will be displayed on REBNY’s public website for one year and at no additional charge.
The REBNY Manual is actively used by members of the industry as a guiding reference on changes to New York City real estate policy, laws, and regulations in addition to REBNY’s By-Laws, Code of Ethics, and Universal Co-Brokerage Agreement. A key tool for networking and outreach, it is also a comprehensive directory of REBNY leadership and committees, REBNY member firms and individuals, government agencies and civic organizations involved in real estate issues, as well as supplies and services that support real estate professionals. Share your message and claim your spot in the REBNY Manual for a nominal fee today. Sign up now by contacting the Membership Department at membership@rebny.com.