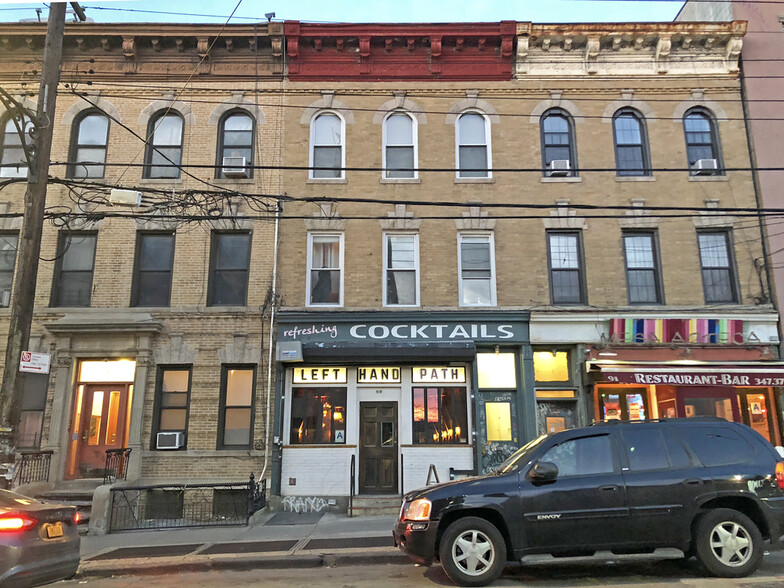 ON THE SCENE: TerraCRG has been retained to sell 89 Wyckoff Avenue

• The sale of 3816 Barnes Avenue, a 6,460-s/f, rent regulated multifamily property located in the Williamsbridge neighborhood of the Bronx. Jonathan Squires, Michael Fioravanti, Josh Neustadter, Addison Berniker and Shayne Soltan are representing the seller in all marketing efforts. 3816 Barnes Avenue is a four-story, seven-unit multifamily building in the Williamsbridge section of the Bronx. It has five two-bedroom apartments and two one-bedroom apartments. T

TerraCRG has been retained to sell 89 Wyckoff Avenue, a free-market, mixed-used building in Bushwick, Brooklyn. Matt Cosentino, Fred Bijou and Eddie Laboz have listed the property at $2,025,000. Located between Suydam Street and Hart Street, 89 Wyckoff Avenue is a two-over-one that is fully leased. The bar on the ground floor, Left Hand Path, has a long-term lease. The two apartments have been recently renovated and the building benefits from a brand-new roof, finished basement and separate heating.

• 205 East 17th Street, a 54-unit apartment property located in Brooklyn sold for $8,200,000. Shaun Riney, Daniel Greenblatt and Zalman Yarmush, investment specialists in Marcus & Millichap’s Brooklyn office and Seth Glasser from the firm’s Manhattan office, represented the seller, a private investor. The buyer, a private investor, was also secured and represented by the team.

• The shopping strip located at 389 Peninsula Boulevard, in Hempstead, sold for $2,350,000. Michael Tuccillo and Willie Jalboukh of the firm’s Manhattan Office represented both the seller, who occupied two spaces in the center, and the buyer, a seasoned real estate operator. The shopping center consists of seven storefronts at 9,500 s/f and a mezzanine. The asset was fully renovated in 2010. Five storefronts are currently occupied.

Compass announced the Adelaide Polsinelli, vice chair, and Michael Cardillo arranged the sale of 2673-2675 Atlantic Avenue in Cypress Hills, in the East New York section of Brooklyn. The property will be re-developed into affordable residential apartments with significant retail on the ground floor. This will be one of the first new development projects in this area. Cardillo and Polsinelli represented both the buyer and the seller.  The property is located between New Jersey Avenue and Vermont Street, in the Cypress Hills, East New York section of Brooklyn. It is steps away from the A,C and J train stations as well as the Long Island Rail Road and Belt Parkway.

Venture Capital Properties announced the sale of 82 7th Avenue in Park Slope for $3,100,000. Team Primeau, led by Rob Primeau, represented the seller on an exclusive basis. The 4-story brownstone is comprised of 4,800 s/f and is located in a prime location in Brooklyn within walking distance of the 2, 3, 4, B, R and Q trains. The building features 1,200 s/f apartments above retail. Team Primeau brokered the transaction alongside Jacob Stavsky representing the seller, Ed Marciano and the buyer a local investor, 82 7th LLC.

Dane Real Estate, led by President Heidi Burkhart, announced the sale of York Towne House, also known as Sencit-York, in York, Pennsylvania. York Towne House is a 201 unit, 10-story high-rise apartment building built in 1979 as an elderly and disabled Project Based Section 8 property located at 200 North Duke Street, York, PA that sold for $19,075,000. York Towne House consists of 100 percent project-based Section 8 one-bedroom units catered to the elderly. The property benefits from being nearby to many stores and services including C-Town Supermarket, T-Mobile and Family Dollar. York Town is situated to be a great asset to the senior market for many years to come.

KZA Realty Group announced the sale of 1979-1981 Hughes Avenue in the Tremont section of the Bronx. Kathy Zamechansky represented the seller of the one-story retail space, Clamil East Holdings Corp. The buyer, Byung Soon Hunt, represented by Netherland Realty and Development Corp., paid $680,000 for the 2,424 s/d space, which is located on a corner lot and is adjacent to two subway lines, a nexus of bus routes and the Metro-North Tremont station.

NAI James E. Hanson negotiated the sale of an 81.6-acre vacant parcel of land at 985 Route 57 in Port Murray, N.J. Sig Schorr represented the seller, Auto & Truck Wreckers, Inc. and the buyer, Irish Meadows, LLC in the transaction. Formerly the home of an automotive and truck parts recycling facility for over 40 years, 985 Route 57 has accessibility from Routes 57 & 80. The new buyer plans on leasing the space on a per-acre basis to small and larger companies that require storage for heavy and light equipment. The parcel’s location on the summit of a hill also affords a private yet open location for the new buyer.