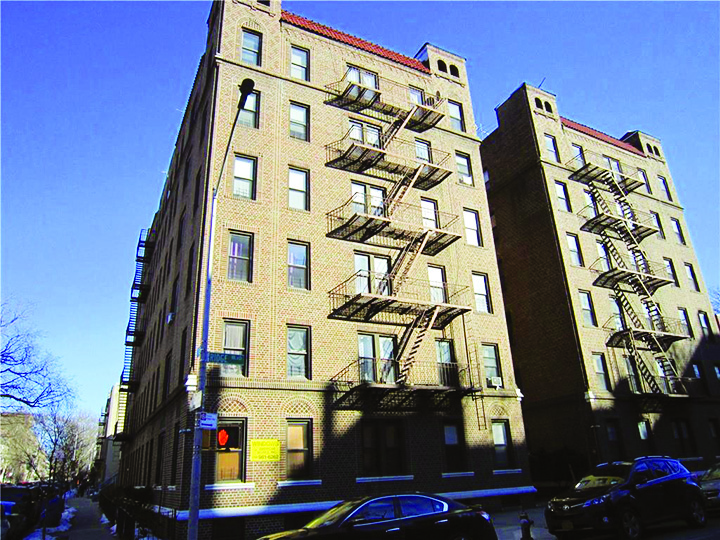 •••
Josh Goldflam, co-founder & principal of Highcap Group, arranged the sale of 129 Malcolm X Blvd. Brooklyn, for $1,450,000. The seller was a partnership of local investors, and the buyer was Wright Capital Management. The property is situated between Quincy Street and Gates Avenue adjacent to a bus stop and a few blocks from the J/Z subway station. Its situated on a block of mom and pop retail stores and mostly low rise apartment buildings. The building is a four-story walkup currently configured as eight apartments plus back yard. The building was delivered vacant. The building measures 4,690 s/f and is 20 feet wide. It is in need of rehabilitation and renovation. The sales price of $1.45 million equates to $308 per square foot.
•••

Daniel Figotin’s Fimida Enterprises, along with partner Sandra Ferrier, acquired four properties in Queens owned by the Diaz family’s Portela Realty for a total of $7 million. The acquisition was financed by a $4.9 million loan from ConnectOne Bank.
• The four mixed use properties have a total of 17,000 s/f of built space and include: 21-02 30th Avenue in Astoria, a three-story corner building anchored by neighborhood restaurant Vesta and five market-rate apartments;
• 47-02 Greenpoint Avenue in Sunnyside, a corner building with three retail spaces including Chihuahua restaurant, Sports barbershop, Think Nail Too Salon and two two-bedroom, market-rate apartments;
• 40-14 83rd Street in Elmhurst, a three-story building with retail and two three bedroom apartments;
• 72-22 34th Avenue in Jackson Heights, a three-story corner building with two medical offices and four rent-stabilized apartments and one private indoor garage.
Ben Normatov and Lev Mavashev of Alpha Realty represented both the seller and buyer in the off-market transaction. The loan was brokered by Jake Gluck’s Fortune Capital Group.

•••
Abe Cohen’s Conway Capital, with the MacTaggart family as partner, have acquired a four story, multi-family building in Park Slope for $8 million. The 11, 668 s/f, 16-unit building at 423 16th Street was built in 1920. It sold for $685 per square foot. Conway Capital also owns the 16-unit building next door at 419 16th Street which they purchased a year ago for $4.25 million. They plan to renovate and lease up both the buildings’ units Bestreich Realty brokers Derek Bestreich and Luke Sproviero represented the seller, Richard Giancarlo.

•••
Brax Realty announced the following sales:
• A corner development site in East Harlem. 1640 Park Avenue on the northwest corner of East 116th Street sold for $2,000,000. Alan Stenson represented both the buyer, The Affect Group and the seller, Great Empire Park Avenue. The property is currently a vacant lot with 25 ft. frontage on Park Avenue and 90 feet on East 116th Street. The zoning for the property is R9, C2-5, EHC and can be developed up to 22,500 BSF.
• Michael Ferrara brokered the sale of a vacant retail building at 1770 2nd Avenue, between East 92nd Street and East 93rd Street, for $4,600,000. Ferrara represented both the buyer, a private investor and the seller, a long-term family ownership. The property was delivered vacant and consisted of 5,000 s/f plus a full basement.

•••
Redwood Realty Advisors has completed the sale of two New Jersey multifamily assets. The 12-unit Chatham Center sold for $5.2 million, and an 11-unit property on Anderson Avenue in Cliffside Park sold for $2.1 million.
• Chatham Center is a trophy asset in the heart of downtown Chatham. Located at the corner of Center Street & Main Street, the property is one block from the NJ Transit Train Station. The units had previously been transformed into Class-A residences with condo-like finishes. Kevin McCrann and Steven Matovski represented the buyer and seller.
• 436 Anderson Avenue in Bergen County was originally built in 1930. The same family has owned the property for more than 40 years. The building features seven one bedroom, 1-bath units and four two-bedroom, 1-bath units. Kevin McCrann and Steven Matovski represented the buyer and seller.

•••
TerraCRG closed on the sale of a mixed-use portfolio in Greenwood Heights totaling $8.6 million. The portfolio includes several industrial properties and a three-story multifamily building. Dan Marks, Daniel Lebor, Matt Cosentino and Adam Tannenbaum represented the seller. The industrial properties comprise four parcels located at 750-758 4th Avenue and 240 24th Street, totaling 25,540 gross square feet. The multifamily building is located at 246 24th Street and includes two residential units for a total of 2,625 gross square feet. The portfolio is across the street from the 25th Street R train station and one block away from the historic Green-Wood Cemetery. HL Dynasty Real Estate Corp. represented the buyer in the transaction.

•••
CenterPoint Properties has acquired 301 Norman Avenue in Greenpoint, Brooklyn. The 66,618 s/f warehouse facility is fully occupied. It can accommodate both surface and dock loading, and has a 26 ft. clear-height and secure parking. Jeffrey Unger and Bob Klein of Kalmon Dolgin Affiliates Inc. represented the buyer and seller in this transaction.

•••
Ariel Property Advisors has closed on the sale of two investment properties totaling $4.6 million: 536 Kappock Street in the Bronx, which sold for $3.2 million, and 261 West 126th Street in Manhattan, which sold for $1.38 million.
• 536 Kappock Street in the Spuyten Duyvil section of Riverdale, is a 12,000 s/f, six-story high-end elevator building. Built in 2008, the turnkey property features 10 luxury apartments comprising eight two-bedroom units, one three-bedroom unit and a one-bedroom unit. Each unit has its own balcony and two of the units have private outdoor patios. The seller was represented by an Ariel team including Victor Sozio and Daniel Mahfar.
• 261 West 126th Street in Harlem, is a three-story, 3,829 s/f mixed-use walk-up building comprising three residential units and one ground-floor commercial unit. The property includes air rights of 6,880 buildable square feet as-of-right, or up to 13,000 buildable square feet with a community facility bonus. The seller was represented by Victor Sozio and James Nestor.

•••
The Rochlin Organization announced the sale of 100 E Mineola Avenue in Valley Stream for $1,750,000. Located on East Mineola Avenue in Valley Stream, the building is a 21,365 s/f multi-tenanted industrial building with a 17,000 s/f lower level. The property sits on 0.83 acres and spans two blocks accommodating its 4-tenants. Elizabeth D. Holmes of The Rochlin Organization represented the seller. The existing tenants currently occupying the property provide a stable financial return over projected operating expenses. The buyer was Kay Development, a seasoned investor and developer that will benefit from the leasing of vacant space.

•••
NAI DiLeo-Bram & Co. announced that Richard Goski and Catherine Goski brokered the sale of a 13,500 s/f industrial building at 1242A-1260 North Avenue in Plainfield, New Jersey. The team represented the buyer and long-time client, Armor Poxy, LLC. The seller, Turtle & Hughes, was represented by Jason Goldman and Michael Kimmel of KBC Advisors. The sale price was $2.35 million. Located within Plainfield’s Urban Enterprise Zone, 1242A-1260 North Avenue is a freestanding building with fenced outside storage. It is located minutes from Route 22, and Interstates 78 and 287. The building offers 15-foot clear ceiling heights, one dock and two drive-in doors.