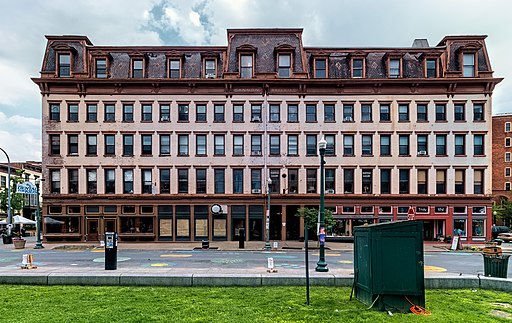 •••
Rosewood Realty Group announced the sale of a 43-unit multifamily building in Bay Ridge, Brooklyn for $7.25 million. The 30,000 s/f building at 353 Bay Ridge Parkway is a seven-story elevator property built in 1961 with 42 rent stabilized apartments and one ground floor office. It sold for 10 times the current rent roll with a cap rate of 4.3% and a price per unit of $168,604.65. There are 21 studios and 21 one bedroom apartments. Aaron Jungreis and Nick Pappas represented both the seller, The Baldwin LLC (Lawrence DiGiovanna & Joanne Belcaro) and the buyer, Meridian Properties LLC — Mike Neamonitakis & Mike Niamonitakis.

•••
GreyHill Group has acquired the five-story, 55,000 s/f Cannon Building in downtown Troy, NY, for $4.05 million. Built in 1835, the property, which is approximately 85 percent leased, consists of 35 residential units, along with office and retail space. HBO is presently leasing a corner unit for the current series titled The Gilded Age, a period drama developed by Julian Fellowes, creator of Downton Abbey. For the production, several city blocks of the historic district have been restored to resemble a Victorian-era streetscape. HBO has plans on returning for a second season and has signed a year-to-year lease. GreyHill Group purchased the property from Cannon Building LLC, which is affiliated with Minnow Associates of Brooklyn. The prior owner had acquired the Cannon Building for $2.5 million in 2017. Both buyer and seller were represented by Jim Conroy of Berkshire Hathaway HomeServices Blake, Realtors.

•••
R.J. Brunelli & Co. completed a property sale on behalf of The Racquet Place, LLP. A 3.5-acre site housing the 27,000 s/f former NY Sports Club building at 450 Hwy. 34 in Old Bridge, NJ, was sold to a private investor. Ron DeLuca and Alexis Fiori represented the seller, while the buyer was represented by Eddie Mardakhaev of Key Commercial Realty.

•••
Gebroe-Hammer announced that David Oropeza and Debbie Pomerantz arranged the $11.75 million sale of an East Orange, NJ, apartment-property package totaling 88 units. The assets included 255 Prospect St. (42 units) and 284 Prospect St. (46 units), both of which are garden-style buildings in a tree-lined residential neighborhood. The duo exclusively represented the seller, F&C Realty Co., LLC, and procured the buyer, a private investor, in the transaction.

•••
Charity Realty International announced the sale of a Class A Industrial facility located at 195 Green Pond Road Rockaway, NJ, for $3.925 million. James Costanzo represented the seller, Tomaro Leasing Corp.,in what was the first sale of the property in 30 years. The buyer, North America Realty was represented by Ronald Kraft of Allied Realty. They occupy a portion of the fully-leased facility and benefit from an above market cap rate. The 12,000 s/f drive-in industrial facility is 50 percent office, 50 percent 24 ft. clear warehouse and built for easy divisions. It sits on 11.2 acres that permits outside storage of materials, equipment, and trucks. In accordance with Charity Realty International’s corporate pledge, a grant for $8,250 will be gifted to Homes For Our Troops.