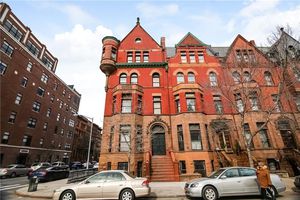 ON THE SCENE: Invictus Property Advisors announces the sale of 135 West 126th Street

The Corbin Group at Rosewood Realty has been retained to sell a block through property at 421 East 161st Street. The proprety is 165 ft. deep and has 79 ft. of frontage on the 161st Street corridor. A daycare center currently occupies 16,600 s/f of the space which is NNN leased to the City. The site has unused air rights of between 67,650 BSF and 90,400 BSF depending on use. It is located twp blocks from the Melrose Metro North Station in an Opportunity Zone . Asking Price $6,950,000.

Lee & Associates NYC announced that Vickram Jambu, Chris Varjan, Jonathan Braun and George Steffani have been named the exclusive sales agents for the two contiguous elevator apartment buildings located in Williamsburg, between Hooper and Hewes Streets. 409 Broadway and 413 Broadway are 10,800 and 11,694 s/f respectively. Each building consists of 20 apartment units and two ground-floor commercial spaces. The apartments are split between 7 one-bedrooms and 13 two-bedroom layouts, with a single bathroom and terrace for each. The retail spaces are 2,000 s/f each and are flexible with separate rentable lower-level spaces and the ability to combine both spaces when fully vacant. Both buildings were built in 2011. The property has an in-place cap rate of 5.7 percent. 409-413 Broadway is located across from the M and J trains at Hewes Street and the G train at Broadway. The portfolio is priced at $12.5 million and benefits from reduced annual real estate taxes due to tax class 2B status for both buildings as well as a 421-A exemption for a 25-year non-cap term.

Compass announced that Adelaide Polsinelli and her team have been retain to sell a development site located at 63-49 & 63-53 60th Place, Ridgewood, Queens. The two contiguous lots have a footprint of 15,540 s/f. The property is zoned R5B offering 20,979 buildable square feet and a combined frontage of 94 ft. on 60th place. The property currently contains a three-story industrial building with parking at 63-49 60th Place and a two-story home next door at 63-53 60th Place. Both properties will be delivered vacant. Located within walking distance of the M train and in close proximity to the Q39 and Q58 buses.

A two-story building located at 78 Unquowa Place in downtown Fairfield next to the train station has sold for $850,000 announced Brett A. Sherman, CCIM, senior vice president at Angel Commercial, who represented the buyer in this transaction. The 0.32-acre property will be used as a short term rental while the new owners obtain approvals for future development.

B+E announced the sale of the Westchester County HomeGoods retail property located at 3 East Main Street, Mount Kisco, NY for $6,829,350.The seller is The Kempner Corporation and the buyer is a 1031 Exchanger. The building is 24,834 s/f on 1.24 acres of land and includes parking. The property carries a new 10-year NN lease with four, five-year renewal options. Spencer Henderson of B+E, made the announcement.

Bestreich Realty Group (BRG) announced the sale of 864 Metropolitan Avenue in the Williamsburg neighborhood of Brooklyn. The 3,750 s/f multifamily property sold for $1,600,000 to SPR Group LLC, a price that equates to $427 psf. The property offers six units comprised of four one-bedroom units and two two-bedroom units. Donal Flaherty, Luke Sproviero and Derek Bestreich represented both the seller, Black Horse Capital and the buyers.

Cervelli Real Estate & Property Management announced the sale of 2507 Bergenline Avenue in Union City. The subject property is a three-story mixed use property containing one commercial store front and three residential units. The property traded for $975,000, which represented a seven percent cap rate.

GFI Realty Services announced the $3 million sale of 2450 Fuller Street, a corner four-story walk-up, 16-unit multifamily property located in the Westchester Square section of the Bronx. GFI Realty senior director Shlomo Antebi represented both the seller and the buyer, both of whom are local investors. Constructed in 1927, the 13,680 s/f property features a mix of 14 one-bedroom units, one two-bedroom unit and one three-bedroom unit.

NAI James E. Hanson negotiated the sale of a 5.76-acre industrial development site at 13 Aaron Way in the White Lake Commerce Park in Sparta, N.J. Sig Schorr and John Schilp represented the seller, Berardi Development Company, and the buyer, Tomco Construction, in the transaction. Occupying 31.54-acres along the NYS&W freight rail line just off of Route 15, the White Lake Commerce Park is made up of 12 subdivided fully improved lots in the heart of Sussex County. Situated 12 miles from Interstate 80 and less than five miles from Route 206, the property’s accessibility makes it ideally suited for a wide range of industrial uses.

• 135 West 126th Street is a 17 ft. wide 9-unit multifamily building with a gross square footage of approximately 3,536 s/f sold for $1,600,000. The property was delivered completely vacant and needed a full gut renovation. There were an addition 2,191 s/f of available air rights and the property is located in an opportunity zone. The building is just a block away from the 2 and 3 subway lines on West 125th Street and Lenox Avenue. Josh Lipton and Andrew Levine represented both the seller and buyer in an off-market transaction.

* 1373 Greene Avenue is a 25 ft wide 6-unit multifamily building with a gross square footage of approximately 4,125 s/f sold for $1,900,000. Five of the six units were delivered vacant and the entire asset was subject to rent stabilization. The building is located a block away from the M subway line on Knickerbocker Avenue and in close proximity to the L subway line at Myrtle-Wycoff Avenues. Josh Lipton and Andrew Levine represented both the seller and buyer in an on-market transaction.

TerraCRG announced the sale of the commercial building at 15 Vanderbilt Avenue in Clinton Hill, Brooklyn. Dan Marks, Daniel Lebor and Garrett Allen represented the seller, Rungravee Napadol. Ali Raza and Troy Gordon of We R New York represented the buyer, Bridgeton Holdings. The sale price was $3,225,000. The 5,640 gross s/f building is comprised of a 3,240 s/f ground floor restaurant and bar with a full commercial kitchen on the lower level and an office on the second floor. The property also has 2,440 s/f of available air rights. It is zoned M1-2 and located across the street from the Brooklyn Navy Yard, home to hundreds of businesses, manufacturers and tech companies.

1291 Saint Marks Avenue, Brooklyn, NY, a 3,120 s/f retail property sold for $869,000. Matthew R. Peters represented the seller, a private investor, and the buyer, a private investor. The property sold at a 4.8 percent Cap rate with one commercial unit in place, which is currently occupied by the City of New York Community Board #8. The property is situated directly in front oF the historic Hunterfly Roadhouses, which are the only surviving and intact residences of Weeksville, a free African American Community built between 1840 and 1883 in Brooklyn