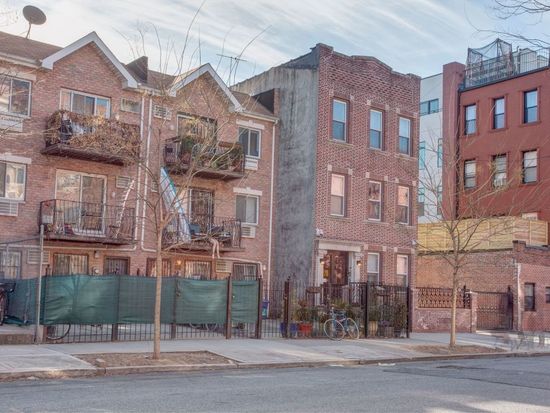 • The Eastern Parkway Portfolio, a package of 5 walk-up buildings in the Ocean Hill/Crown Heights neighborhoods of Brooklyn. The asking price for the 61-unit portfolio is $12.5 million, or $170 per square foot. Ariel has also been hired to sell 162A Utica Avenue, a 3-story vacant and fully gutted mixed-use building in Crown Heights.

• Eastern Parkway Portfolio: The 4-story properties span a total of 73,450 gross square feet. The fully occupied buildings are comprised of 2 studio, 32 one-bedroom, 23 two-bedroom, and 3 three-bedroom units. Of the apartments, 19 have preferential rents. The property package also includes 1 retail unit that rents for $3,700 per month. Jonathan Berman, Victor Sozio and James Meehan are representing the seller, a private investor group. Located at 1613, 1617, 1621, 1625, and 1631 Eastern Parkway, the properties offer two large dual boilers. Both the electric and gas for the units are individually metered.

• 126 West 23rd Street, a 3,757 s/f condo in Chelsea, Located between Sixth and Seventh Avenues in Chelsea, the single tenant retail condo is located on the ground floor of the Citizen building, a newly constructed 29-unit luxury condominium. The space is currently leased to global fitness franchise Orangetheory Fitness, which has over 600 locations worldwide.

• 209 West 79th Street, a 5,137 s/f t condo in the Upper West Side. The fully leased retail condominium is anchored by global children’s fitness brand My Gym and physical therapy chain, Recovery Physical Therapy, and located at the base of newly constructed 19-unit luxury condominium. The unit has a 680 s/f basement space.

Upland Property Advisors has been to sell 167 Bowery, a four-story commercial loft building comprising nearly 29,000 s/f. The property possesses an additional 15,000 s/f of available development rights which can be utilized in a redevelopment. Glenn Tolchin and Yoav Oelsner are leading the effort to sell the property, which has been owned and managed by the same family for more than 50 years. The highest and best use of the building is likely boutique office space with ground floor retail, although hotel and residential uses are also permitted. Existing commercial tenants, all of which pay below-market rents and have short term leases or demolition clauses, provide cash flow while redevelopment plans are completed.

Greiner-Maltz Investment Properties has been retained to sell the following properties:

• 112-21 Farmers Blvd (Between 112th Road 112th Avenue) St Albans, Queens. The asking price is $625,000. The two-story, 2,200 s/f mixed-use building in Saint Albans on Farmers Boulevard consists of one retail unit and two residential units. Located near the LIRR and multiple bus lines, this offering is a great opportunity for an owner, user, and/or investor. Samia Farah is handling the assignment.

• 37-49 91st Street (Between 37th and Roosevelt Avenues) Jackson Heights, Queens. The asking price is $1,775,000. The three-level, 3,400 s/f medical building consists of three medical offices, one office vacant. Situated amongst a large cluster of doctors’ offices and immediate proximity to the 7 train, this offering is ideal for an owner-user. Swain Weiner is handling the assignment.

Angel Commercial announced that 70 Fort Point LLC has purchased the commercial property located at 70 Fort Point Street in Norwalk, CT, for $965,000. Jon Angel represented the seller of the 0.38-acre property which is comprised of two buildings: an 8,600 s/f mixed-use building and a 1,797 s/f one-story building. Previously owned by Mizing Paloian Trust, the property is in an industrial #1 zone adjacent to the Metro-North Railroad line and near restaurants, banks, and shopping. The buyer is a mechanical contractor who plans to occupy a portion of the building while keeping current tenants in place. John Zervos of DVB Commercial Realty Inc. represented the buyer.

Ariel Property Advisors announced the sale of 100 Livingston Street, a four-story office building in Downtown Brooklyn. The building sold for $10.5 million at a 5.5% cap rate. Sean R. Kelly, David Khukhashvili and Jiani Zhou represented the seller, ACHS Management, and procured the buyer, Ecorise Development. The property, which spans 12,681 s/f is located on the south side of Livingston Street between Court Street and Boerum Place. The building contains five office units with three medical tenants with established practices occupying 7,000 s/f. The current operating rents are nearly $60 psf.

Brax Realty announced the sale of a 10,836 s/f two story warehouse in the Bushwick neighborhood of Brooklyn. The property, 21-27 Garden Street, located between Flushing Avenue and Bushwick Avenue, sold for $5,650,000. Michael Ferrara represented the seller, the Goldstein Family, Roni Soleimani and Joshua Pomerantz of SP Capital Group represented the purchaser, Rivington Company. This was the first time the property traded hands in over 48 years. The property is a one story warehouse that was delivered vacant at closing. With a lot size of 7,900 s/f and a zoning of R6A, the property allows an as of right development of 23,400 buildable square feet.

Compass announced that Dayanne Costa of the Columbia Vitolo Team has closed on the $1.375 million sale of 274 Quincy Street, Brooklyn. Costa represented the seller of the three-story property which contains two three-bedroom and one two-bedroom rent-stabilized units. The three-unit townhouse is located off Nostrand Avenue, steps from the G-Line in a Qualified Opportunity Zone. it was delivered with two of the units vacant. The 3,120 s/f property has a built out basement and private backyard. Keith Gauntlett with EXR Real Estate, represented the buyers, private investors.

• 60 East Industry Court, a 22,145 s/f office and medical facility in Deer Park, New York. The final closing price was $2.4 million, equating to approximately $110 psf. Gary Pezza represented the seller, 19-29-33 37th Street LLC. The property was purchased by Park Point 60 LLC, who has hired Cushman & Wakefield to be the exclusive leasing agents for the property. 60 East Industry Court is a five-story property with between 5,000 and 15,000 s/f of space immediately available for professional, financial, business, administrative or medical use. The site currently has multiple capital improvements in progress and offers parking for over 130 vehicles.

Kings Capital purchased 192 Rockaway Ave Brooklyn, NY an 8-unit building in a section of Bedford Stuyvesant consisting of 4 free-market and 4 rent-stabilized apartments for $1,775,000 at a sub 5 Cap and $328/psf and $221,875/door. Matt Peters of Marcus & Millichap represented the seller and secured and represented  the buyer . This marks Kings Capital’s 8th transaction in the area.

• 343 56th Street, a 6-unit apartment property located in Brooklyn, sold for $720,000. The buyer, a private investor, was secured and represented by John Brennan.

JLL Capital Markets announced the $11.05 million sale of The Mount Laurel Office Center, an 83,216 s/f office portfolio located at 530, 532, and 534 Fellowship Road in Mount Laurel, New Jersey. JLL represented the seller, Pennmark Properties, and procured the buyer, a private investor. The Mount Laurel Office Center is fully leased to six tenants and is anchored by the various uses of the United States Government’s General Services Administration (GSA), representing 64 percent of the portfolio’s rentable square footage. The property has visibility from Route 73 and convenient access to many of the area’s primary thoroughfares, including Routes 38 and 70, Interstate 295 and The New Jersey Turnpike. The JLL Capital Markets team representing the seller was led by Brett Segal, Doug Rodio and Brett Grifo.