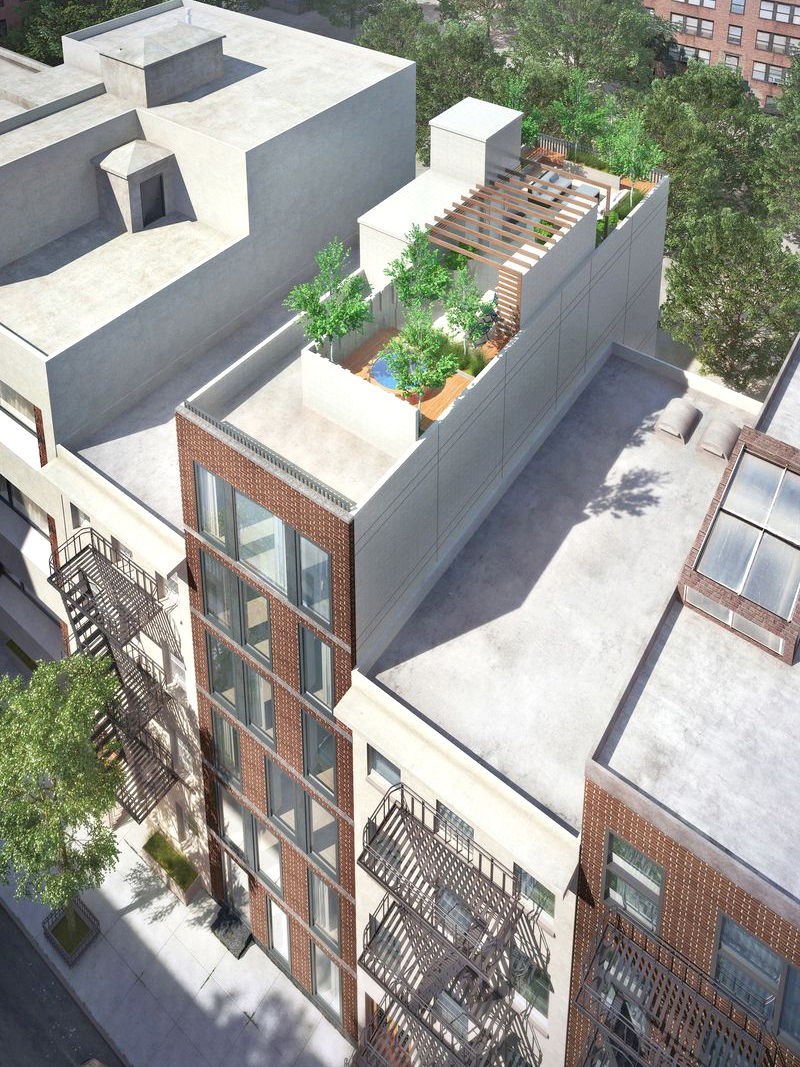 Compass announced that Adelaide Polsinelli, vice chair of the investment sales division, along with Trystan Polsinelli, have been hired to market La Maison at 323 East 52nd Street, a new boutique luxury condominium building located between First and Second Avenues. The six-story, newly built, elevator property contain 9,000 s/f. Developeed by Private Luxury Collection New York and designed by award-winning RMBA Architects, the property is an example of 19th century architecture revived with a state-of-the-art renovation. The property consists of four homes all with private outdoor space. The propert would be suitable for individual luxury apartments, single family, corporate housing, or embassy use.

• The sale of The Richmond Arms Apartments, a 25,980 s/f multifamily property located at 104-35 102nd Street in the Ozone Park neighborhood of Queens. Stephen R. Preuss and Kevin Schmitz will be leading the marketing efforts on behalf of the property’s seller, 104-35 LLC. The energy efficient pre-war brick building offers four-stories and 32 apartments, plus one super apartment. There are 11 free market units and 22rent stabilized units. The building includes two studios, 24 one-bedrooms, six two-bedrooms and one three-bedroom unit. There is a new cello foam roof and new windows.

580 East 182nd Street, a 50,222 s/f residential development site located in the Belmont neighborhood of the Bronx. Jonathan Squires, Josh Neustadter, Michael Fioravanti, Addison Berniker and Shayne Soltan, will be leading the marketing efforts on behalf of the property’s seller. The corner site has over 200 ft. of frontage, situated between St. Barnabas Hospital, Bronx’s Little Italy and Fordham University. Located within an opportunity zone, the lot has 41,8852 residential buildable square feet (BSF) across two lots and offers over 150 ft. of wrap-around frontage across East 182nd Street and Wade Square. Situated directly across the street from St. Barnabas Hospital, the site can allow for approximately 50,222 BSF with a community facility. The property is within walking distance of the B and D subway lines at the 182nd – 183rd street station.

GFI Realty Services has been named the exclusive sales agent for 2918 Frederick Douglass Boulevard, a four-story multifamily building comprised of 12 free market units, in the Central Harlem section of Manhattan. Yehoshua Shamel will oversee the marketing of the property, with pricing targeted at $5.650 million. Constructed in 1920, the recently gut renovated building totals 7,700 s/f, and is composed of 12 two-bedroom units. The asset offers a 24-hour business center, storage space with bike racks and a backyard. It is close to public transit, several parks and a variety of restaurants and stores.

Holliday Fenoglio Fowler has been selected to market the sale of 25 Monroe Place, a 12-story, 67-unit, luxury apartment building located in Brooklyn Heights. This offering provides an opportunity to acquire a trophy asset in a sought-after neighborhood. The vast majority of the property is comprised of fair-market units not subject to rent stabilization. 25 Monroe Place is surrounded by medium- and low-density buildings that provide water and Manhattan skyline views. Built in 1938, it combines pre-war architectural elements and spacious apartment layouts with newly upgraded condo-quality finishes The HFF investment advisory team is led by managing directors Jeff Julien and Rob Hinckley and director Steven Rutman.

Ariel Property Advisors facilitated the sale of 99 & 103 Atlantic Avenue, two mixed-use buildings in Brooklyn Heights’ Historic District. The pair of four-story buildings, which are dominated by free-market residential units, sold for $8 million, or $736 psf, with a 5.25% cap rate. Located on the north side of Atlantic Avenue between Hicks Street and Henry Street, the properties have 11 residential units, of which 10 are free market, and two ground-floor retail units. Exclusive agents Sean R. Kelly Esq. and David Khukhashvili represented the seller, Itzhaki Acquisitions, and procured the buyer, Cheever Development.

• 464 Irving Avenue, a vacant development site in Bushwick, Brooklyn, sold for $1,100,000. The property is currently a three-unit but can be converted into six total units. The Lot Dimension is 20 ft by 95 ft with an FAR of 2.0 and zoned R6. Donal Flaherty and Steve Reynolds facilitated this transaction representing the seller, 464 Irving Avenue LLC, and the buyer, IrvingAvenue LLC.

• 29 Devoe Street, a 5,000 buildable square foot development site in Williamsburg, Brooklyn, sold for $1,760,000. The lot measures 25 ft by 100 ft and is zoned R6B with a max FAR of 2. The property is located steps from the L and G subway lines and one block from an array of retail along Metropolitan Avenue. Hakeem Lecky and Luke Sproviero facilitated both sides of the of the transaction. The seller was 29 Devoe LLC and the buyers are Potrapeluk LLC.

Nicole Carra of NLC Realty, LLC Assoc. announced the sale of 251 East 77th Street in the Lenox Hill neighborhood of Manhattan. The five-story elevator building sold for $13 million. Built in 1910, the 11,430 s/f property has a total of 15 commercial and residential units. Carra represented both the buyer and the seller in the off-market transactions.

• 6 Stone Street, a 9,075 s/f mixed-use property in the Financial District, sold for $6,650,000, equating to approximately $733 per square foot. Maurice Suede and Daniel Soyak represented the seller, 6 Stone Street, LLC. The property was purchased by Conway Capital and Davean Holdings. 6 Stone Street is a five-story mixed use property located between Whitehall and Broad Street. The current arrangement of the floors as per the certificate of occupancy is commercial on the first three levels, and residential on the 4th and 5th floors.

• 12-16 30th Avenue, a 7,400 s/f residential site in Astoria, Queens, sold for $3,775,000 equating to approximately $225 per square foot. Andreas Efthymiou and Stephen R. Preuss represented the seller, Meli Contracting, in this transaction. The building was purchased by Tsoumpas 1216 Group, LLC. The property lies in a certified opportunity zone and closed as one of the highest trades for residential land in this section of Astoria.” The site is occupied by a warehouse building with 14,800 buildable square feet and will be delivered vacant. The building sits on a 7,400 s/f lot in R6B zoning, allowing for multifamily or community facility development. 12-16 30th Avenue is a short walk to the Astoria Ferry Terminal at Hallets Cove Peninsula.

Westbridge Realty Group announced the $2.1 million sale of a 16-unit multifamily building in Ocean Hill, Brooklyn. The 14,240 s/f walk-up at 2044 Bergen Street was built in 1910. It sold for 10 times the current rent roll, at a cap rate of 6.3 percent. The sale prices equates to $147 per square foot, or $131,250 per unit. Ari Benyacov represented the buyer, Rob Raphaeli, and Westbridge’s Ali Rossland represented the seller, Andrew Weber, in the 1031 exchange transaction. The asset is one of the first in the Certificate of Non-Harassment program that has traded hands in Brooklyn.

• 6705 11th Avenue, a 4,800 s/f mixed-use property in Dyker Hieghts, Brooklyn, sold for $1,435,000. John Brennan and Samuel Finkler, investment specialists in Marcus & Millichap’s Brooklyn office, represented the seller, a private investor. The buyer, a private investor, was also secured and represented by the team. The property was sold for 20.27 times the current gross rent roll, setting a price record for Dyker Heights commercial real estate. The buyer saw an opportunity to capitalize on below market rents in all 6 units, with no leases or rent-regulation in place.

NAI James E. Hanson negotiated the sale of an 8,011 s/f office building at 906 Mt. Kemble Avenue in Harding, NJ. Michael Walters and Fernando Garip represented the seller, The Hampshire Companies, in the transaction with the buyer, HSD, a medical and life sciences product development firm. Built in 1952, 906 Mt. Kemble Avenue is a three-story office building with a unique farmhouse design, mirroring the country setting of the surrounding area. In addition to the main building, there is a pizza restaurant of 800 s/f. Less than 45 minutes from New York City and in close proximity to several international medical companies.

• 11 Union Avenue, Bethpage to the United States of America, acting by and through the Naval Facilities Engineering Command. Naval Facilities plans to develop the 1.25-acre site and erect a water treatment plant. David G. Hunt represented the seller Gayron De Bruin Land Surveying and Engineering, PC. The buyer was self-represented.

Stan Johnson Company completed the sale of a single-tenant flex facility in North Syracuse leased to Novanta. The property was sold by New York-based Mercer Street Partners. They were represented by John Rotunno of Stan Johnson Company. The property was purchased by an affiliate of National Asset Services Inc. for $11.875 million. The 55,000 s/f property includes 15,000 s/f of light industrial space and 40,000 s/f of recently constructed Class A office space. The build-to-suit headquarters is located on 6.7 acres at 7279 William Barry Boulevard.