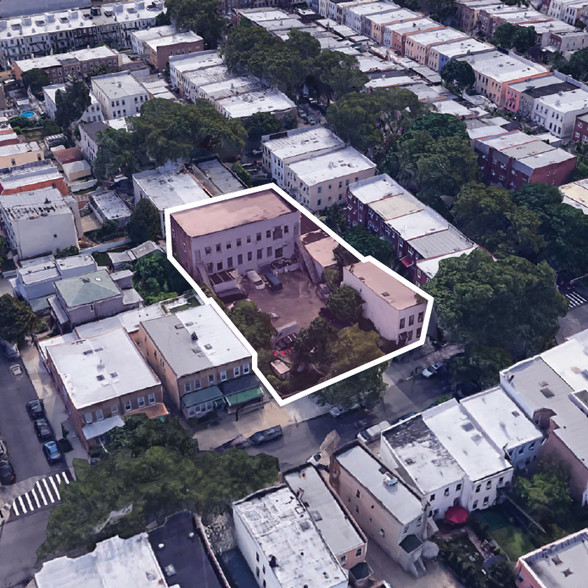 Hilly Soleiman of Besen & Associates has been retained to sell the retail condo located at 381 Broome Street. Built in 2003, the condo contains 4,130 s/f (above and below grade) and is situated in the heart of Little Italy, between Mulberry and Mott Streets. The ground floor has 12 ft. ceiling heights with 25 ft. of retail frontage. Located blocks from the Bowery Station on the [J, Z] trains and the Spring Street Station on the [6] train. Asking price is $3,750,000.

Compass announced that Adelaide Polsinelli has been retained to sell 63-49 & 63-53 60th Place, two contiguous lots with a footprint of 15,540 square feet, located in Ridgewood, Queens. The Property is zoned R5B with a maximum FAR of 1.35, offering a total of 20,979 buildable square feet and a combined frontage of 94 feet on 60th Place. The Property currently contains a three-story industrial building with parking at 63-49 60th Place and a two-story home next door at 63-53 60th Place. Both properties will be delivered vacant. 63-49 & 63-53 60th Place are located within walking distance to the M train and in close proximity to the Q39 and Q58 buses.

• 3083 Webster Avenue, an 84,000 s/f development site, currently functioning as a Shell gas station, located in the Bronx. A team consisting of Jonathan Squires, Michael Fioravanti, Josh Neustadter, Addison Berniker and Shayne Soltan will be leading the marketing effort. The site is located in an inclusionary housing zone at 3083 Webster Avenue, in the Norwood section of the Bronx. The 15,000 s/f lot offers 84,000 buildable square feet. The site currently has a Shell gas station tenant on a triple-net lease expiring in September 2021. The property is located within walking distance to the 205th Street Subway Station, numerous bus lines and is minutes from Fordham University’s campus.

• 1591 Boston Road, a 43,512-square-foot residential development site in the Crotona Park neighborhood of the Bronx. A team consisting of Jonathan Squires, Michael Fioravanti, Josh Neustader, Addison Berniker and Shayne Soltan will be leading the marketing efforts on behalf of the property’s seller, Tried Stone Baptist Church. The lot’s corner location and frontage allows for a developer to create an efficient apartment building. 1591 Boston Road is located on the corner of Boston Road and Suburban Place. The property currently includes a 2,937 s/f church building. The building can allow for up to 43,512 buildable square feet and offers 230 feet of wrap around frontage.

• 143-28 Cherry Avenue, a 12,915 s/f residential building in Flushing, Queens. Ownership is currently seeking investors for this opportunity. A team consisting of Stephen R. Preuss, Kevin Louie and Charlie Dupont will be leading the marketing efforts on behalf of the property’s seller, Castleview, LLC and The Gordian Group of New York. 143-28 Cherry Avenue is a 20-unit corner brick walk-up apartment building. The unit mix consists of four studios and 16 one-bedroom units, with only one vacant apartment. A majority of the apartments have been renovated, along with the building’s roof and boiler system. The property is well-maintained with no deferred maintenance. It is located within walking distance to Main Street and Roosevelt Avenue with access to the 7 subway train, the Long Island Rail Road and numerous bus lines on Kissena Boulevard.

RM Friedland announced that Marco Lala has been retained to sell the following properties:

• Free marketing apartment building located in the Nodine Hill section of Yonkers, NY on the west side of Van Cortlandt Park Avenue.The property consists of four six-room apartments, one three-room apartment and a garage which fronts on Walnut Street. Features include: large unit layouts, #2 oil boiler with two above ground tanks, upgraded electric panels in units and new vinyl treads on stairs.Local Beeline Bus service is a short walk away.Asking price is $1,150,000

Newmark Knight Frank (NKF) has been retained as the exclusive advisor for the sale of Talleyrand Office Park, located at 200 & 220 White Plains Road in Tarrytown, NY . Talleyrand is situated on 11 acres and is comprised of two, six-story office buildings totaling approximately 179,000 s/f. Kevin Welsh, Brian Schulz, and Chuck Kohaut of NKF’s Capital Markets team are representing the seller. The properties are located at the intersection of I-287/ Cross Westchester Expressway (Exit 9), I-87, and Route 9, three minutes from the Governor Mario M. Cuomo Bridge.

Ariel Property Advisors has facilitated the sale of 440 West 36th Street, a development site located in Hudson Yards in Manhattan. The property – currently a 25 ft. wide vacant, 6-story multifamily building — sold for $6.9 million, translating to $464 per buildable square foot and $1,095 per existing square foot. The site, which spans 14,862 buildable square feet, is located on the south side of West 36th Street, between 10th Avenue and Dyer Avenue. The building measures 6,300 s/f and has 8,562 s/f of additional unused air rights. It is located within a R8A/C2-5 mixed-use zoning district. The new owner can build to the maximum 6.02 as-of-right FAR. The new owner can convert the existing structure into a mixed-use condominium or into a mixed-use rental project. Exclusive agents Matthew L. Gillis, Howard Raber, and Michael A. Tortoricirepresented the seller, while Angela Huang of Chase Global Realty LLC, procured the buyer.

TerraCRG announced the sale of 55-61 Summit Street, a 17,600 BSF development site in the Columbia Street Waterfront District of Brooklyn. Dan Marks, Peter Matheos and Mike Rafter of the TerraCRG team represented the seller and closed the deal at $3,725,000. The property is comprised of four lots totaling 8,000 s/f and is currently occupied by a one-story garage and vacant land. 55-61 Summit Street was recently rezoned to a Mandatory Inclusionary Housing site with an R6B designation, allowing for a total of 17,600 BSF with a 2.2 FAR. The quiet, residential blocks surrounding the property are lined primarily with townhouses, punctuated by occasional new developments. It is a short walk to the F and G Carroll Street stop and close by to the SB Red Hook ferry which goes to DUMBO and Wall Street.

NAI Mertz announced that senior vice president Jonathan Klear, along with executive vice president Fred Meyer, SIOR, completed the sale of 100, 200 and 300 Craig Road located within Century Office Park in Manalapan, New Jersey. Totaling approximately 78,000 s/f of office space, the properties were sold to a local investment buyer for $5.2 million. Klear and Meyer also delivered several new tenants to the properties thus increasing occupancy to 70 percent prior to concluding the sale. Located off of Route 9, these two-story office buildings have newly renovated lobbies and parking for more than 300 cars. Nearby amenities include many shopping and dining options.