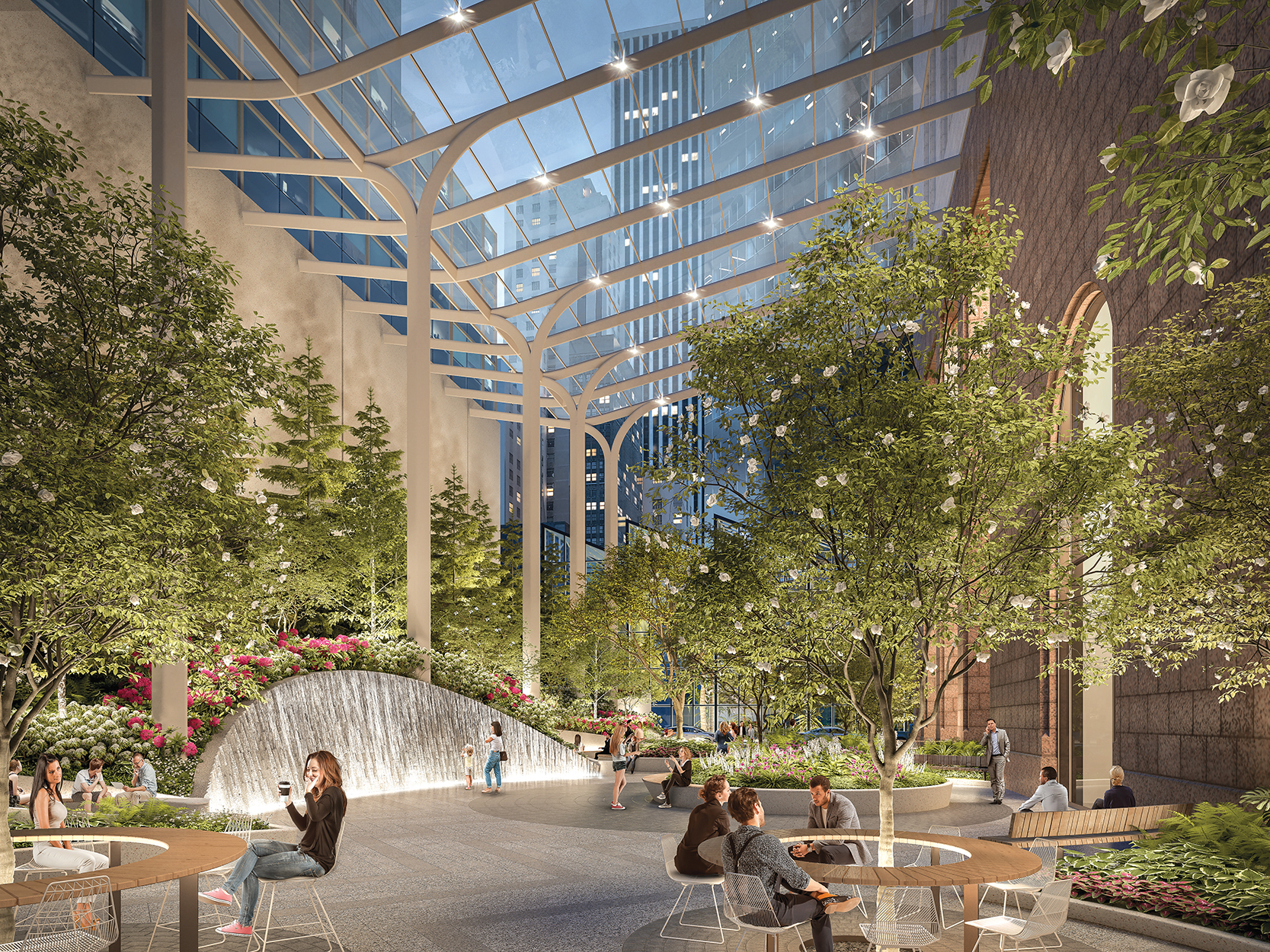 The Olayan Group has released new details on the public open space at 550 Madison, Philip Johnson and John Burgee’s world-renowned Postmodern skyscraper that is being brought back to life as a premiere office tower.

At 550 Madison, the amount of public space has declined over the years due to multiple alterations.

With the proposed plan from Olayan and landscape architects Snøhetta, the team will not only restore but exceed the original amount of open space that was created when the building opened.

“Philip Johnson and John Burgee’s vision for 550 Madison was to create not only a unique office building, but a dignified and attractive community amenity with public open space,” said Erik Horvat, managing director of real estate at Olayan America.

“Snøhetta is restoring their intention for the open space with a reimagined new public garden that will further improve the vitality of East Midtown. “As the largest outdoor space of its kind in this district, the garden at 550 Madison will be a new anchor point in the heart of Midtown Manhattan, and a huge amenity to the local community and our world-class office tenants.”

Snøhetta is creating a retreat for tenants and the community to enjoy.

The planned garden would increase the public open space by 50 percent to more than 21,000 s/f, with planting and seating.
While 44 percent of the space will be planted with a diversity of plantings, the garden will also accommodate and serve more people with seating, tables, and public bathrooms.

The public space will also offer bike racks and plant 45-50 trees, where there currently are none.

Approved by the Landmarks Preservation Commission earlier this year, the open space is currently under its final review with the Department of City Planning.

In October, Olayan revealed the new ground-floor lobby for 550 Madison, designed by Gensler. The lobby will connect to the proposed new garden and includes a window to the garden, signaling to passersby on Madison Avenue that there is a green oasis open to the public.

Since its opening in 1984, 550 Madison has hosted just two tenants – AT&T and Sony. The Olayan Group acquired the building in 2016, and the building became New York City’s youngest landmark in 2018.

Recognized around the world for its distinctive architecture, including the Chippendale top, 550 Madison will open next year as a multi-tenant building for the first time.

The interior renovation is now more than 50 percent complete and the tower will be only LEED Platinum and WELL Gold certified building in the Plaza District.

An amenity package for tenants and visitors will include food and beverage concepts, lounges, conferencing and work spaces, as well as fitness and wellness offerings.

Olayan is preserving the murals by Dorothea Rockburne in place in the building, which were installed in the sky lobby by Sony in 1994.

The owner is working with development partners RXR Realty and Chelsfield on the revitalization of 550 Madison.

AECOM Tishman is the Construction Manager for the revitalization of 550 Madison. CBRE is the exclusive leasing agent for the building.