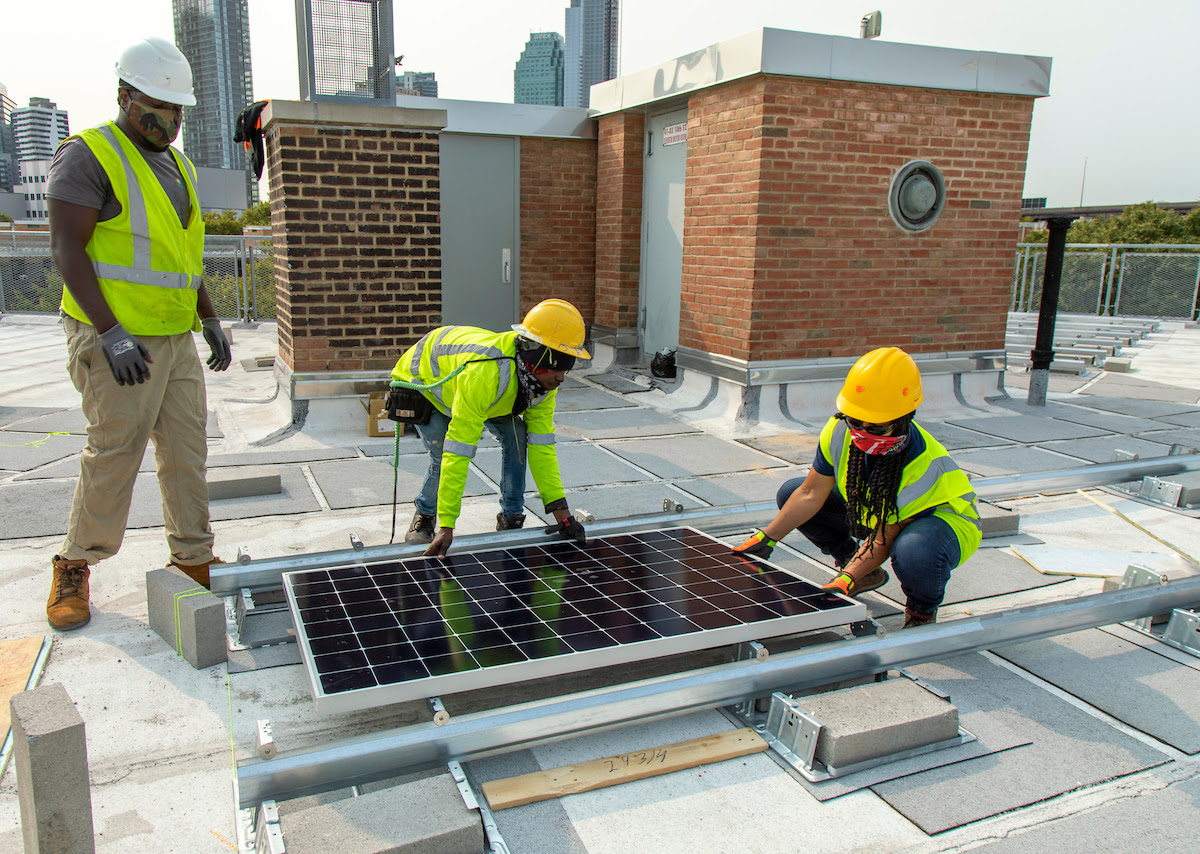 NYCHA nears completion of biggest solar project in its history

The New York City Housing Authority (NYCHA) is nearing completion of a of 1.8 megawatts rooftop solar array on 27 buildings across Queensbridge North and Queensbridge South Houses, the largest public housing project in the country.

The installation is the first to reach completion as part of NYCHA’s solar program, and is a part of the NYCHA Sustainability Agenda commitment to host 25 megawatts of solar power by 2025, which will make it the largest community shared solar project in New York City.

A solar developer team led by Bright Power, Sol Purpose, and Sunwealth Power worked with the Authority to design, install, and maintain the solar systems. NYCHA will receive $1.3 million in lease revenue over the next 20 years.

As a part of the project, a cohort of NYCHA residents have been trained in solar installation and have received their OSHA certification. The project team has hired 13 NYCHA residents and community members as full-time installation employees for this project, with opportunities for advancement and permanent employment.

“NYCHA roofs are a valuable asset to drive equitable access to solar energy, raise much-needed revenue and provide inspiring workforce development opportunities for our residents to join the green jobs economy,” said NYCHA Chair & CEO Gregory Russ. “This project is one of many that speak to the Authority’s necessary work around climate resiliency and sustainability.”

Stephen Murphy, HUD Deputy Regional Administrator for New York and New Jersey, said,  “NYCHA is not only generating additional revenue from leasing its rooftop space for solar, it’s also providing new job opportunities for residents and using a portion of the profits to fund scholarships for low and moderate-income New Yorkers. HUD looks forward to the completion of the remaining projects.”

The electricity generated from these systems will provide a discounted electricity rate for approximately 470 New York City households.  A portion of this power will be reserved for low- and moderate-income New Yorkers, including NYCHA residents who pay their own electric bills.  The project will also dedicate a portion of its profits to fund scholarships for low- and moderate-income New Yorkers.

As part of the HUD Renew300 program and the NYCHA Sustainability Agenda, NYCHA has committed to host 25 megawatts of solar power on its property by 2025.  The energy produced by these installations will also contribute to meeting Mayor Bill de Blasio’s climate change goals, including reducing greenhouse gases by at least 80 percent by 2050.

The electricity generated by the solar arrays, also known as “community shared solar,” will belong not to NYCHA, but to residents and neighbors who subscribe to the service. Community solar arrays allow for renters who do not own their own roof space (or residents whose own roof space is not suitable for solar) to access the benefits of low-cost solar power.