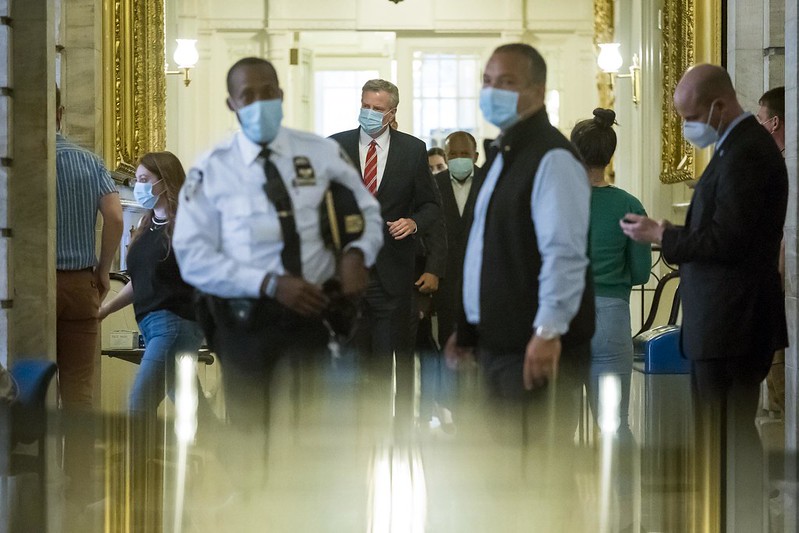 “This is thoroughly political and unconstitutional. The President is playing cheap political games with Congressionally directed funds,” said the mayors.

“Our cities are bringing communities together; our cities are pushing forward after fighting back a pandemic and facing the worst financial crisis since the Great Depression, all despite recklessness and partisanship from the White House. What the Trump Administration is engaging in now is more of what we’ve seen all along: shirking responsibility and placing blame elsewhere to cover its failure.”

Governor Andrew Cuomo told the President he doesn’t have the power to cut off vital federal funding to New York after he labelled the city an “anarchist jurisdiction.”

But with New York eligible for some $7 billion in federal grants in 2021, Attorney General William Barr warned on Monday, “We cannot allow federal tax dollars to be wasted when the safety of the citizenry hangs in the balance. It is my hope that the cities identified by the Department of Justice today will reverse course and become serious about performing the basic function of government and start protecting their own citizens.”

Some of the city’s biggest employers have also railed at the city for failing to make New York safe and secure for residents and workers.

On behalf of some 160 employers, the Partnership for New York City wrote to Mayor Bill de Blasio earlier this month saying, “There is widespread anxiety over public safety, cleanliness and other quality of life issues that are contributing to deteriorating conditions in commercial districts and neighborhoods across the five boroughs.

“We need to send a strong, consistent message that our employees, customers, clients and visitors will be coming back to a safe and healthy work environment. People will be slow to return unless their concerns about security and the livability of our communities are addressed quickly and with respect and fairness for our city’s diverse populations.”

Violent crime has been on the rise throughout the city since the start of the pandemic. The latest figures from NYPD are for August and show a 166 percent increase in shootings, compared to the same time last year, rising from 91 to 242.

There were over 1,200 robberies, some 1,300 burglaries and 53 people murdered in August alone.

Speaking on MSNBC last week, Mayor Bill de Blasio acknowledged, “Things came to the point where everything that anchored society, wasn’t there. And people went through such pain and frustration, and the crime levels did go up.”

However, he said he believed the city was turning a corner as it slowly recovers from one of the nation’s worst coronavirus outbreaks.

“We’ve been through a very tough time. This city was the epicenter of the crisis, but New York City never gives up. We went through hell and now we are coming back and you see more and more activity on our streets. You see more and more jobs coming back. You see the biggest school system in America coming to life. I’m very convinced we’re going to turn the tide on all these things.”

Among the initiatives the city has launched on its road to recovery is the creation of NYPD gun suppression units working to get guns off the streets and an Asian Hate Crime Task Force dedicated to working with a community  de Blasio said has suffered “unacceptable” discrimination.

“We see verbal attacks, physical attacks. We see people blaming a community here for a virus that originated far away, and that people here had nothing to do with at all. And yet, somehow, they’re being blamed and that’s unacceptable. We will not allow it and we’ll fight back against it,” said the mayor.

The city is also bolstering its street and park cleaning services and the mayor personally ordered hundreds of homeless men  out of an Upper West Side hotel where they’d been housed to protect them from the virus, saying the situation was “not acceptable.”

Most recent surveys show office workers continue to stay away, however, with the Partnership for New York City (PFNYC) finding that employees continue to rank the virus as their biggest concern.

PFNYC found that just eight percent of employees had returned to the office as of mid-August. The real estate industry is the most aggressive about bringing workersback to the office. Over half (53 percent) have already returned and 94 percent are expected to return by July 2021.

Tech employers expect 74 percent of employees to return to the office by July 2021, finance and insurance employers expect 55 percent and consulting firms expect 50 percent. Accounting, Media and Entertainment, Sports and Hospitality employers have much lower rates of return.

Issues include waiting to see the status of COVID-19 infections in the fall, the availability of a vaccine, health and safety of employees’ family members, availability of office space for social distancing, and local healthcare capacity.